Former Vice President Joe Biden and Vermont Senator Bernie Sanders are tied at 26% in the most recent Emerson national poll. Sanders’ support has increased 9 points from the Emerson February national poll, taken before he announced his campaign for President. Following the frontrunners in the poll are California Senator Kamala Harris at 12% and former Texas Representative Beto O’Rourke at 11%. O’Rourke’s support has increased 7 points from Emerson’s February national poll. Rounding out the top five is Massachusetts Senator Elizabeth Warren at 8%. The poll was conducted March 17-18 of Democratic Primary voters with a subset of n=487, +/- 4.4%. 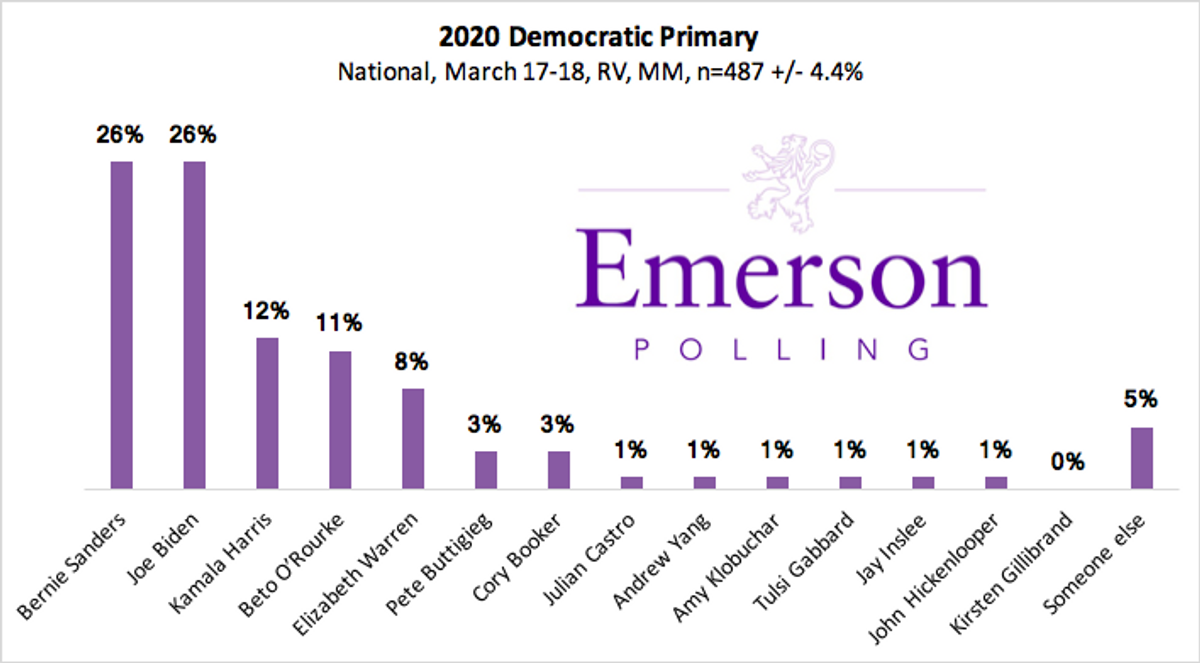 In general election matchups between President Trump and the top potential Democratic challengers, all such matchups fell within the margin of error - except when Trump was matched up against Biden, where Biden beats Trump 55% to 45%. The national poll had a sample of n=1,153, +/-2.8%. 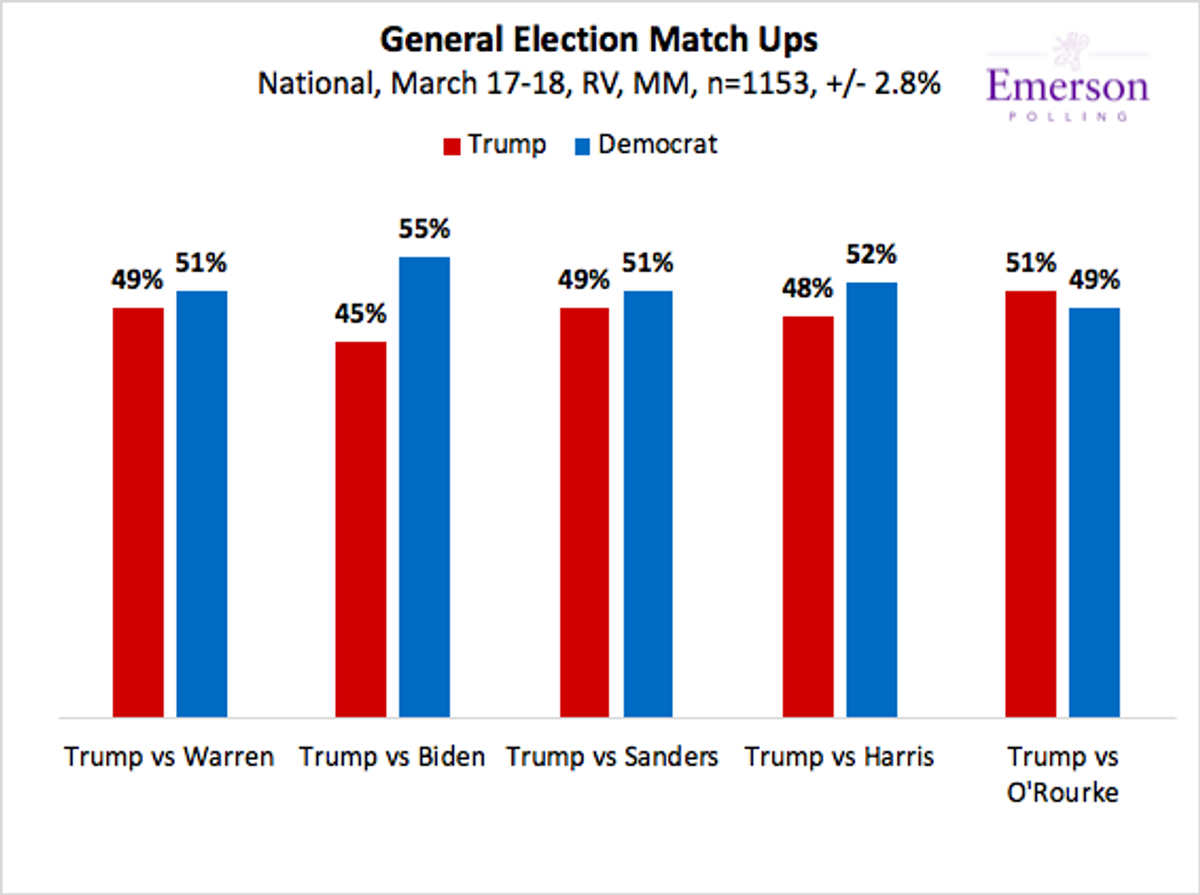 Howard Schultz once again appears to be weakening Democratic candidates hopes against President Trump. While Biden has a 10-point lead on Trump in head-to-head matchups, with 55% of the vote, he receives just 52% when Schultz is included as an option, shrinking Biden’s lead to 8 points. In a three-way matchup between O’Rourke, Trump, and Schultz, the latter pulls in 10% of the vote - leading to a Trump victory by plurality. 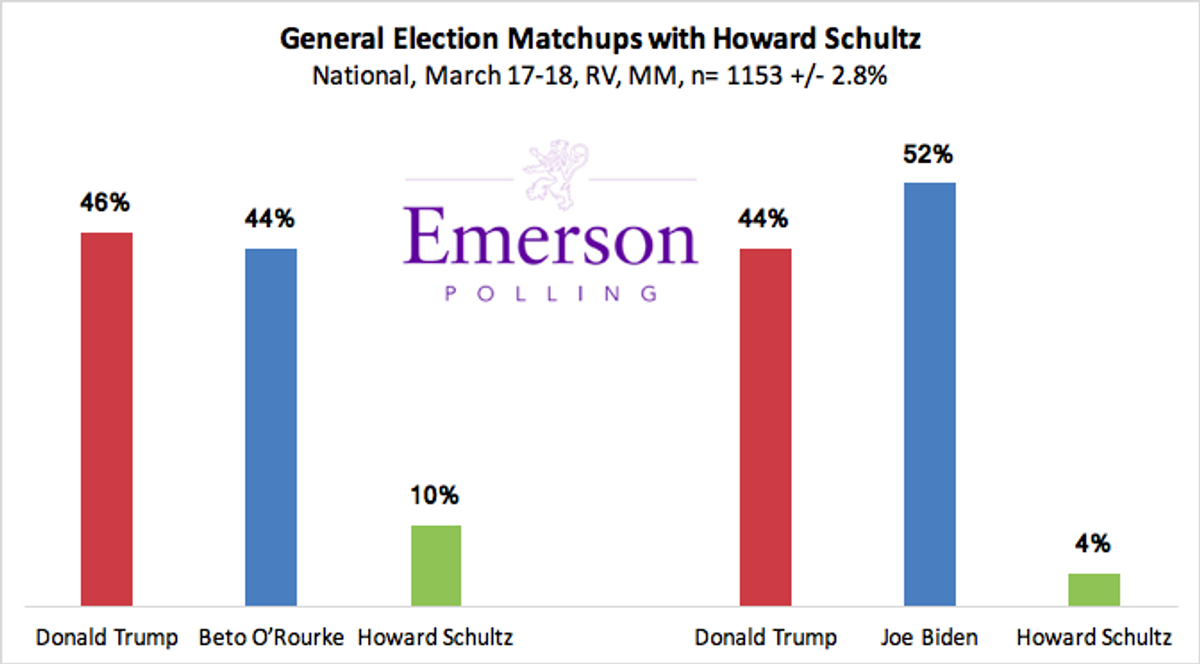 However, 56% of respondents said that America was not as respected as it once was, as compared to 44% of respondents who says it now is more respected. These numbers suggest that a majority of Americans are happy with the current economic state of the U.S., a factor that may aid Trump in his reelection campaign. On the other hand, the majority of Americans do not approve of Trump’s foreign policy, a potential weak spot for the President headed into the 2020 election. 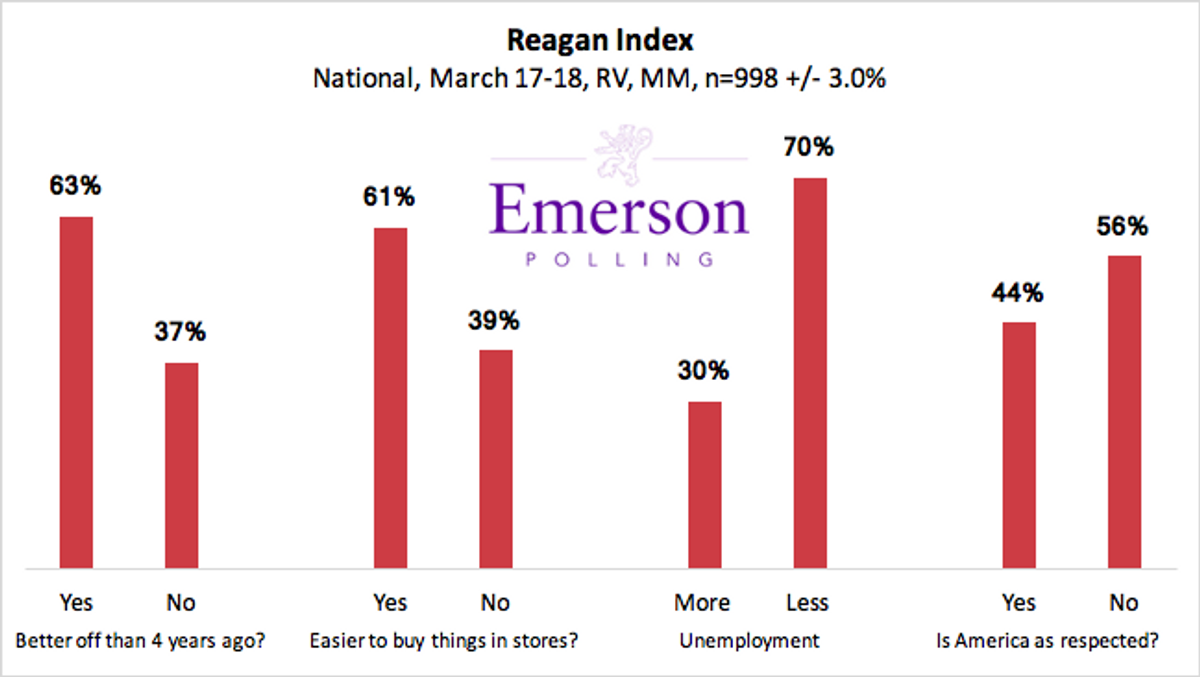 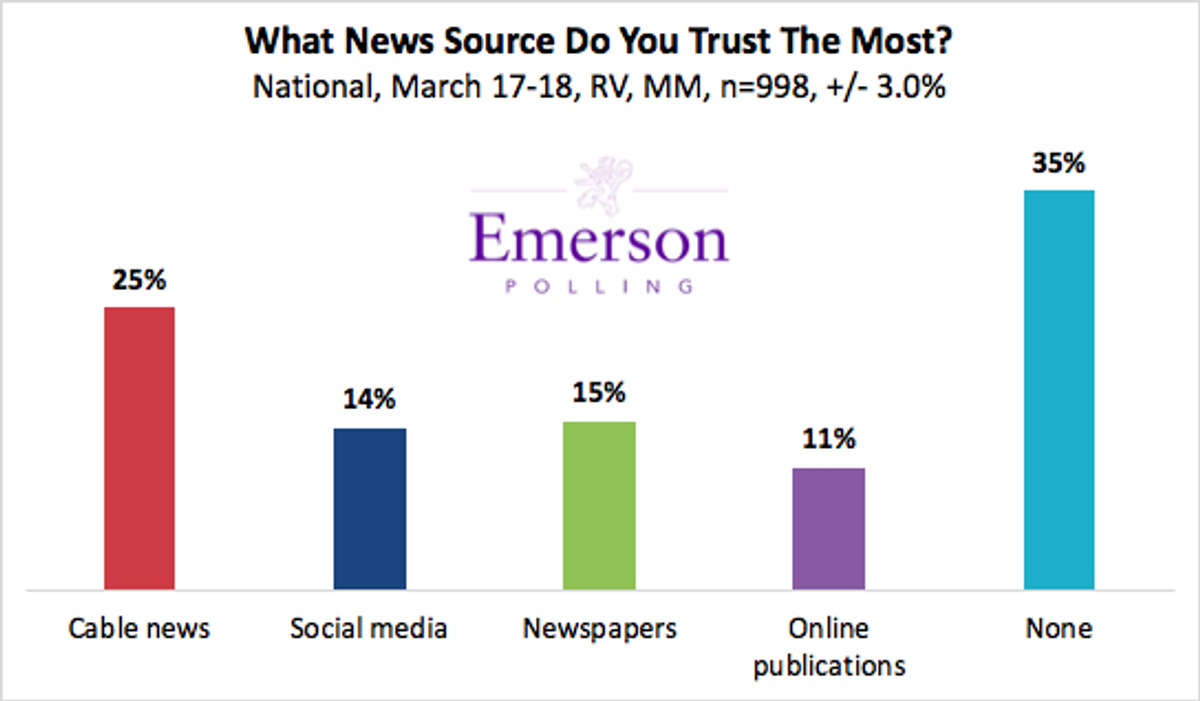 When voters were asked which television news source they trust the most, Fox News received a plurality of the vote, 37%, followed by CNN with 22% and MSNBC with 14%. CBS, NBC, and ABC all received 9%. 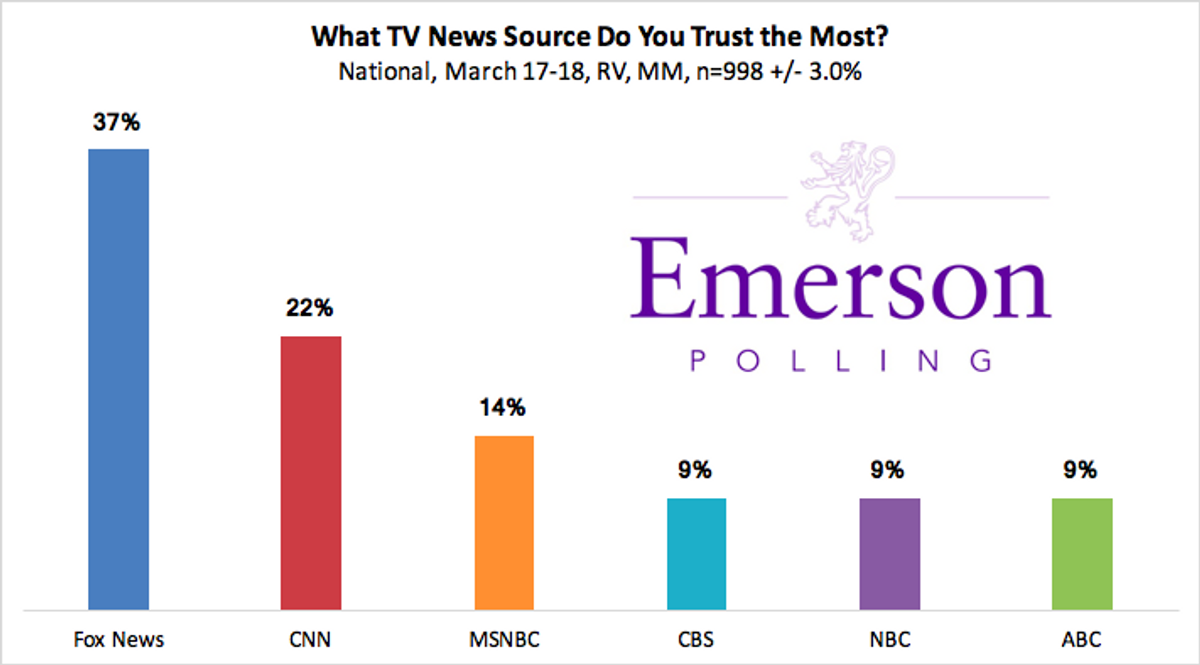 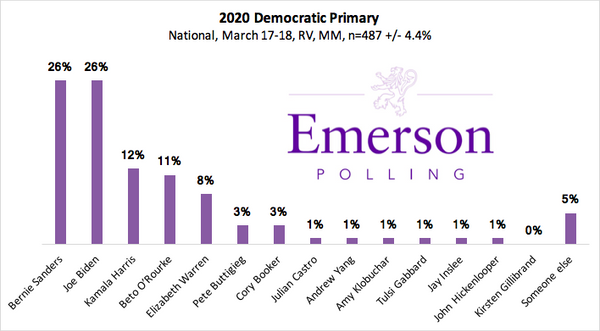 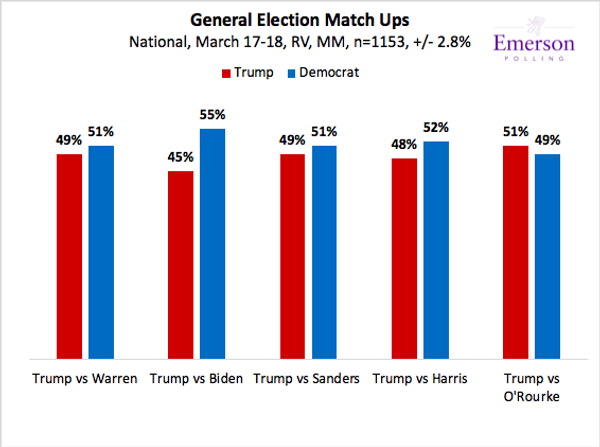 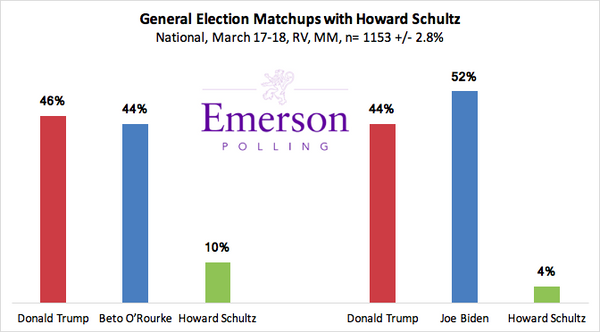 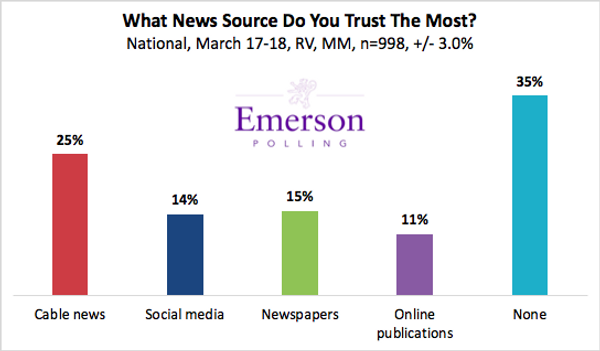 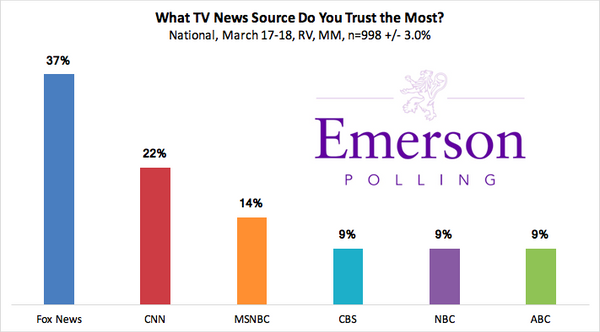 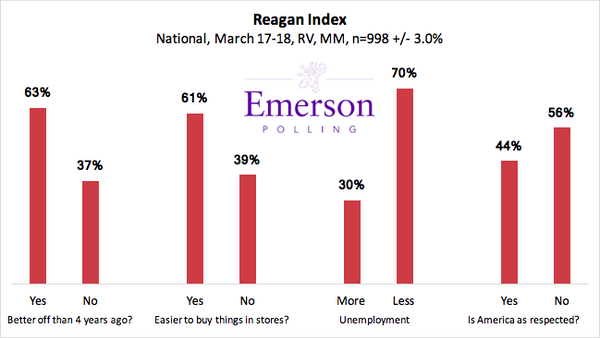