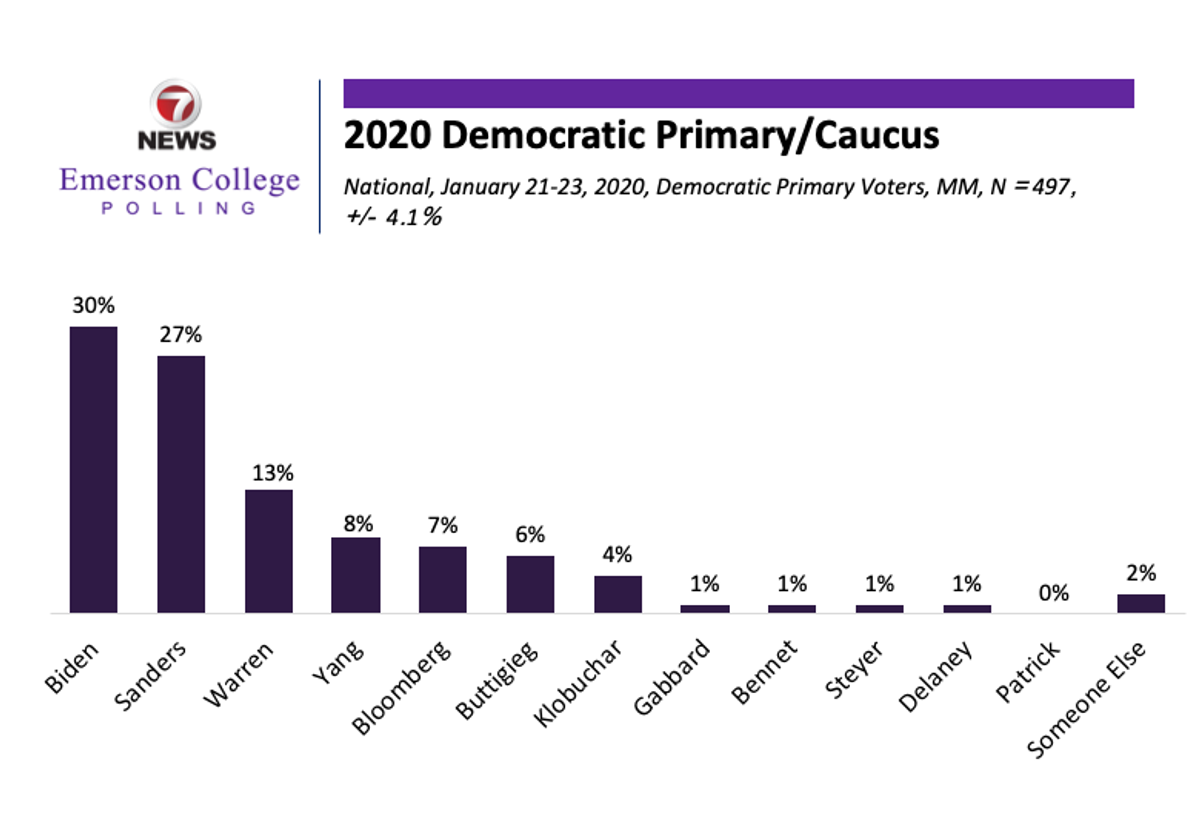 Sanders continues to dominate among young people (ages 18-29), with 47% of this group’s support. Andrew Yang also draws most of his support from the same group, with 20% of these voters. Biden has the support of 14% of this group, with Warren at 10%. Sanders remains strong among 30-49 year-olds with 37%, followed by Biden with 24% and Warren with 11%. Biden picks up support among 50-64 year-olds, with 40% of that group’s support. Warren, Sanders, and Buttigieg trail him with 16%, 13%, and 12%, respectively. Biden’s plurality is even stronger among the oldest group of voters, with the support of 47% of those over 65. Warren has 14% of this group’s support, followed by Michael Bloomberg with 12% and Sanders with 10%.

Spencer Kimball, Director of Emerson College Polling points out: “If Bloomberg continues to gain support it could come at Biden’s expense, which could create a pathway for Sanders to the nomination. On the other hand, Yang is pulling votes away from Sanders with younger voters and this is a very interesting age dynamic.”

Among Hispanic/Latino voters, Sanders and Biden have equal amounts of support at 33%. Following in this group is Bloomberg with 12% and Yang with 9%. Sanders holds a strong lead among White voters with 30% support, followed by Biden at 20%, Warren at 17% and Buttigieg at 10%. Conversely, among African-American voters, Biden holds majority support with 52% support followed by Sanders with 17%, Warren with 12% and Yang with 9%.

Looking at ideology, Sanders has pulled away with “Very Liberal” voters to a majority of 55% support, with Warren at 16%, and Yang at 9%. “Somewhat Liberal” voters prefer Biden as he leads with 32% support, followed by Sanders with 26%, and Warren and Yang with 11%. And among “Moderate” or “Conservative” voters, Biden holds a larger lead with 40% support. Sanders receives 15%, Warren 13%, and Bloomberg 11% among those voters.

Voters are beginning to finalize their support as 55% reported they will not change their minds from their chosen candidate, contrasting with 45% who said there is a chance they could change to another candidate prior to their primary or caucus. This is an increase from the 51% of voters in Emerson’s December national poll who indicated they were set with their candidate. Support is the most solid among Sanders voters, as 76% will definitely vote for him. Biden supporters are split, with 50% saying they will definitely vote for him, and 50% saying they are open to another candidate.

When Democratic primary voters were asked who they expected to win the nomination, a majority (53%) predicted Joe Biden to be the party’s final candidate. 24% expect Bernie Sanders to win the nomination, with no other candidate breaking into double digits. Biden and Sanders voters are the most confident in their candidate, with 88% of Biden voters and 57% of Sanders voters expecting their candidate to win the nomination. The next most confident group of supporters are Bloomberg voters, with 49% believing Bloomberg will be the nominee. Among Warren supporters, 49% expect Biden, 16% expect Sanders, and 30% expect Warren. Sanders also is the expected nominee for a majority (53%) of Yang voters. 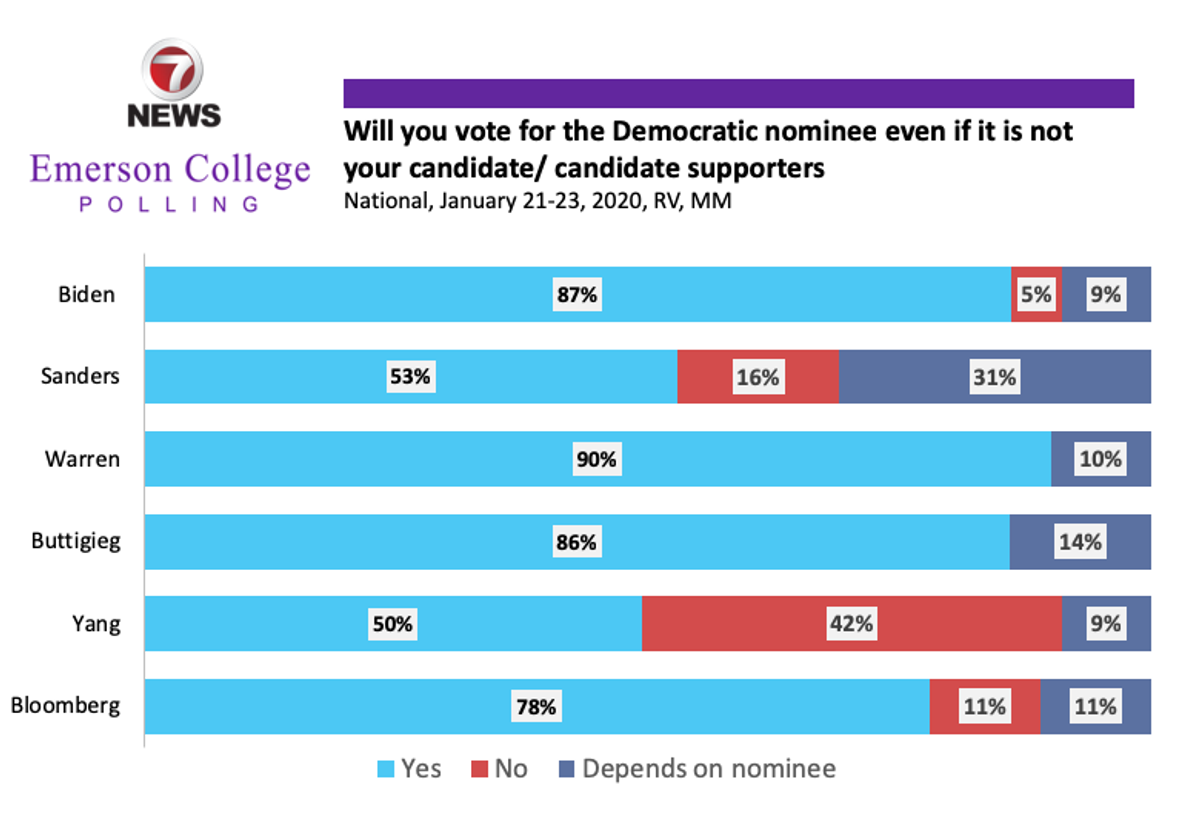 President Trump’s approval has moved up slightly over the last month from 46% to 47% approve, with his disapproval moving from 49% to 48%. Within independent voters, Trump’s approval sits at 44% approve and 49% disapproval. Trump has also gained support within the Republican primary, going up from 90% to 92% against former Governor Bill Weld and former Congressman Joe Walsh.

There is a sharp divide between males and females in their approval of the President’s approval. Among men, Trump has a 57% approval and 38% disapproval rating whereas among women Trump’s approval flips; he has a 38% approval and 57% majority disapproval. 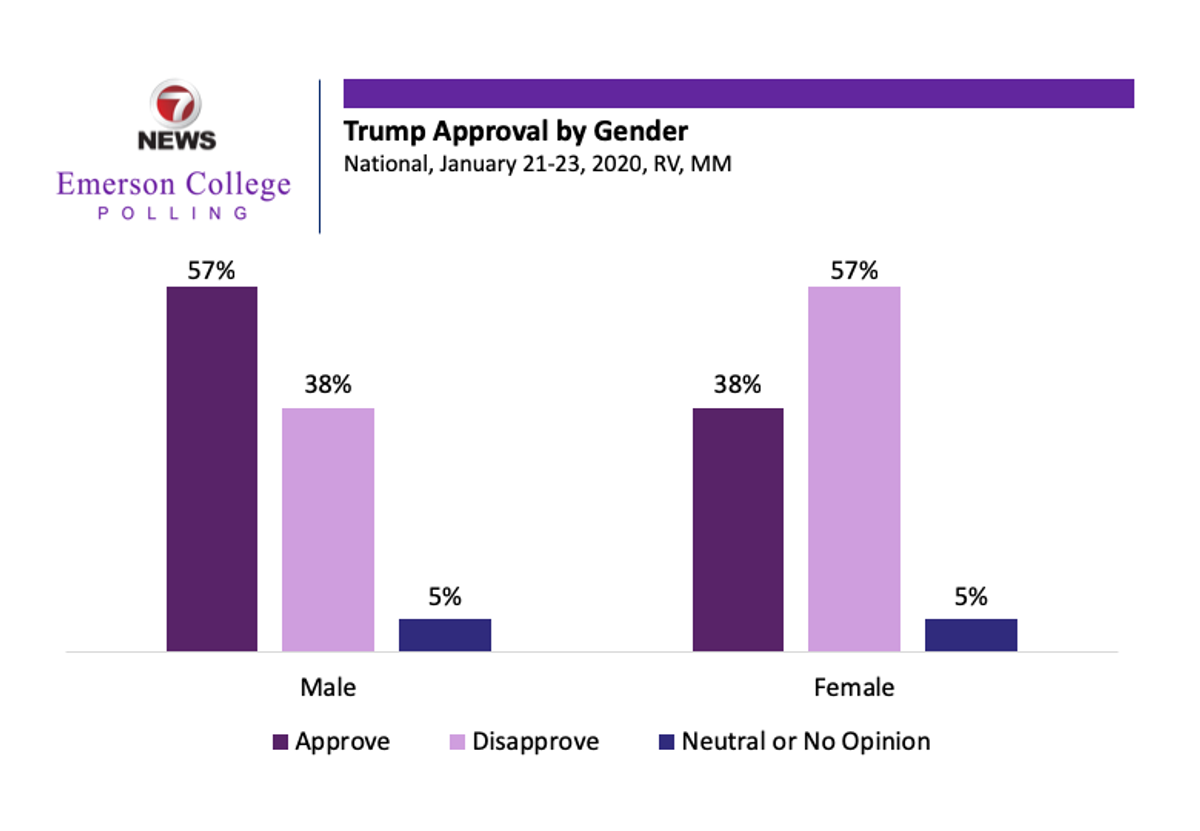 In potential head-to-head matchups for the November election, all top candidates are well within the margin of error, President Trump trails Sanders 51% to 49%, is tied with Warren and Biden at 50% each and leads Buttigieg at 51% to 49%. 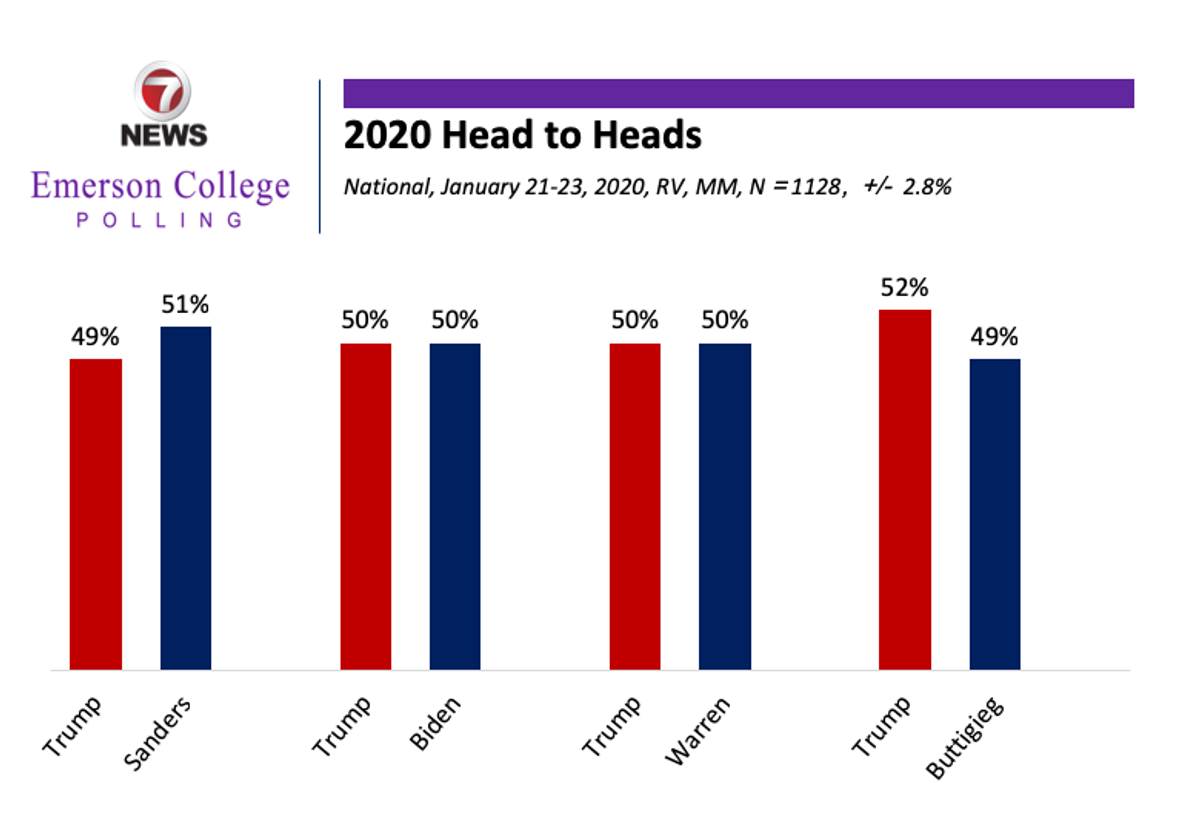 A strong majority of voters (58%) want witnesses called as part of the impeachment trial, 29% do not, and 13% are unsure on the issue. Overall, voters are split on the removal of Trump from office with 51% in support of removal and 49% opposed.

The most important issue for voters in deciding for whom they will vote for president is the economy at 37%, followed by healthcare at 16% and social issues at 13%. Impeachment and the environment follow at 8%, followed by immigration at 7%. There was a divide among the Democratic frontrunners supporters on this question as the top three issues for Biden supporters were health care (29%), impeachment (24%), and social issues (14%). While among Sanders supporters, their top three issues were health care (37%), the economy (23%) and the environment (20%).

Kimball notes that “while the Democrats have struggled to make impeachment relevant to voters, they have been very effective in changing the conversation from immigration policy, which Trump used as a major piece of his platform in 2016. Last June, 12% of voters chose immigration as their most important issue, compared to only 7% in this latest poll.”

Amidst the divisive political rhetoric in the United States, It appears there is one issue of consensus and agreement among voters across all parties: #Megxit. Prince Harry and Meghan Markle recently decided to step back from their senior positions as members of the United Kingdom royal family, largely in an effort to escape the British tabloids. The couple has shed some of their titles and relocated to Canada. American voters, regardless of their political affiliations to support this choice. Fifty-three percent said they support Prince Harry and Meghan Markle’s decision, 20% oppose and 28% have no information on this issue. Among Democrats, 68% support the decision and 16% oppose it. Among Republicans, 43% support it and 23% oppose, and among independents, 45% support and 21% oppose.

The National Emerson College Poll was conducted January 21-23, 2020 under the supervision of Assistant Professor Spencer Kimball. The sample consisted of registered voters, n= 1,128, with a Credibility Interval (CI) similar to a poll’s margin of error (MOE) of +/- 2.8 percentage points. The data was weighted based on 2016 voter model of gender, education, age, ethnicity, and region. It is important to remember that subsets based on gender, age, party breakdown, ethnicity, and region carry with them higher margins of error, as the sample size is reduced. Data was collected using both an Interactive Voice Response (IVR) system of landlines only (n= 741) and an online panel provided by Amazon Turk (n= 387). 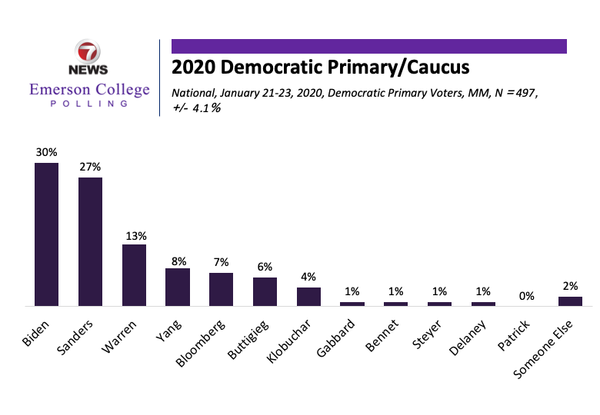 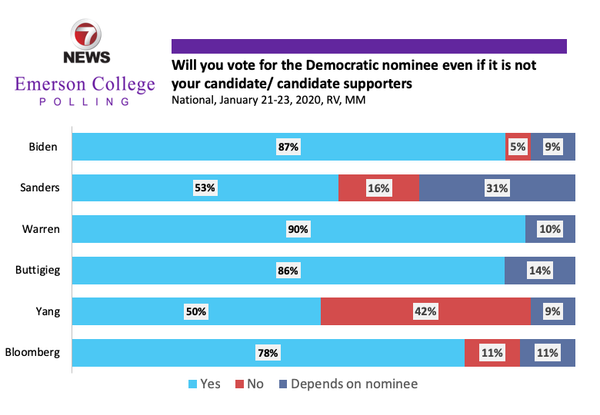 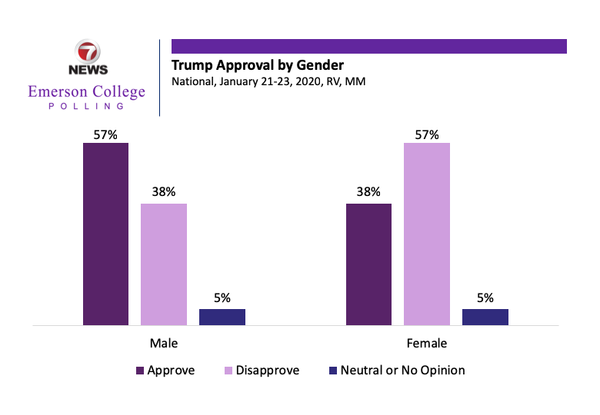 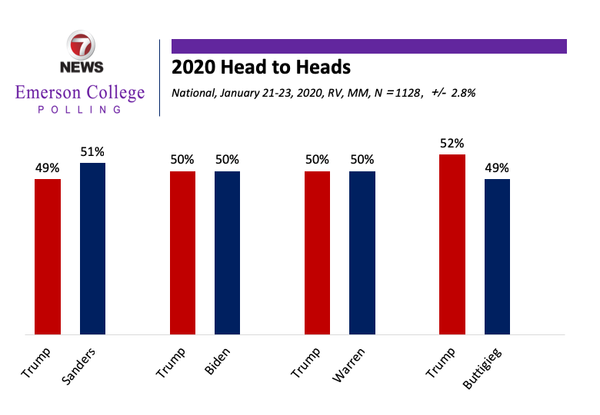