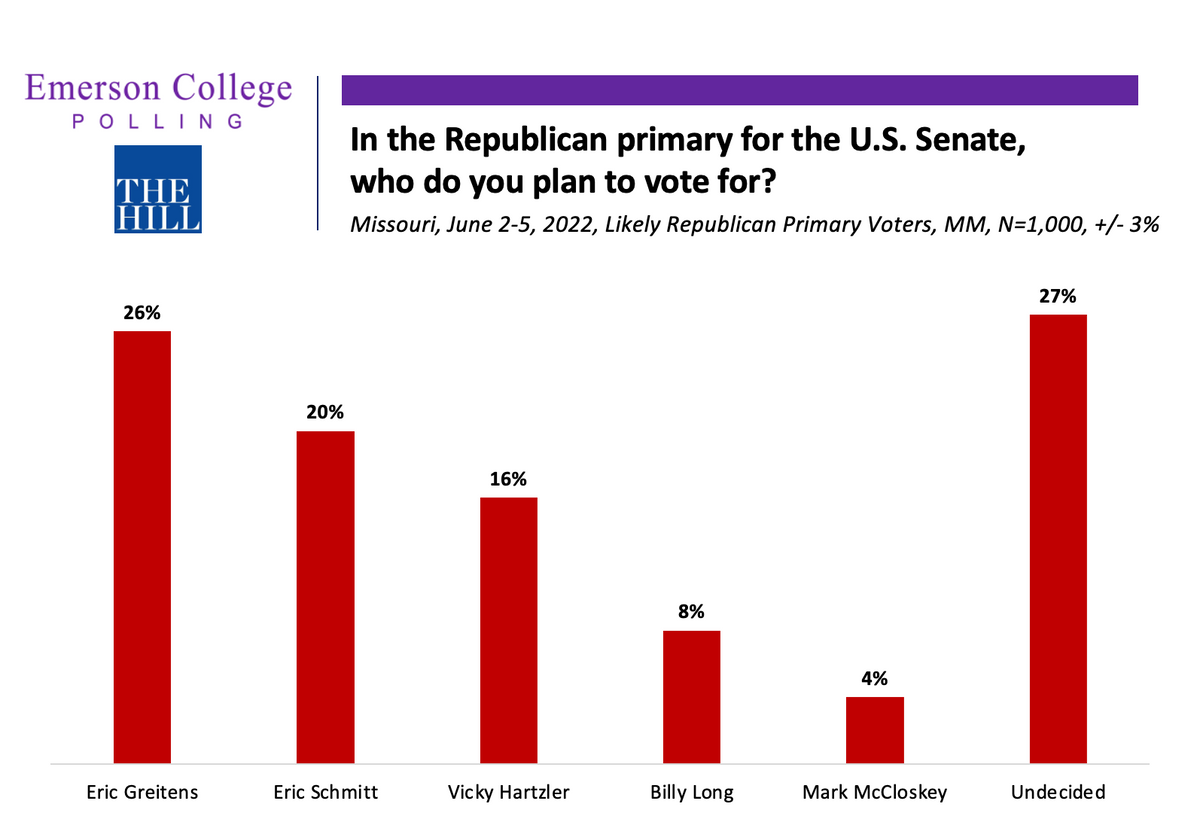 A majority, 55%, of voters say they will support their chosen candidate; however, 45% say there is a chance they could change their mind and vote for someone else.

Spencer Kimball, Executive Director of Emerson College Polling found, “62% of Greitens and 65% of Hartzler supporters plan to stick with their choice, a majority, 55%, of Schmitt voters say they could change their mind suggesting a softness in his support at this time.”

Kimball noted, “Of those that said they would be more likely to support a Trump endorsed candidate, 32% break for Greitens, 24% for Schmitt and 9% for Hartzler suggesting she is running in a different lane for the nomination.” Kimball continued “While 51% of undecided voters say Trump’s endorsement makes no difference on who they support, 43% of undecided voters say they are more likely to support a candidate if endorsed by the former President.”

Despite trailing in the ballot test Schmitt had the highest favorable opinion among likely Republican primary voters at 56% with 20% unfavorable, Greitens was at 50% with 35% unfavorable with Hartzler at 38% favorable, 26% unfavorable.

“Greitens’ favorability is over ten points higher among women than among men,” Kimball continued, “There is also a similar gender divide in the ballot test where male voters are split between Schmitt at 25% and Greitens at 24%, while 13% support Hartzler, whereas Greitens leads with 27% among women voters, followed by Hartzler with 18% and Schmitt with 15%”.

A majority, 61%, say the economy is the most important issue facing Missouri. Other issues reported include immigration at 10% and crime at 8%. Covid came in at the bottom at .3%.

Eighty percent (80%) of respondents say supply chain issues have affected them personally through items being unavailable or the delivery of items being delayed, whereas 20% say they have not been personally affected.

Kimball found that “Of those who think abortion should be illegal in all cases, 28% break for Greitens, 25% for Schmitt and 8% for Hartzler.”

The Emerson College/The Hill Missouri poll of likely Republican primary voters was conducted June 2-5, 2022. The sample consisted of likely Republican primary voters, n=1,000, with a Credibility Interval (CI) similar to a poll’s margin of error (MOE) of +/- 3 percentage points. The data sets were weighted by gender, age, education, region, and mode based on 2022 turnout modeling. It is important to remember that subsets based on demographics carry with them higher margins of error, as the sample size is reduced. Data was collected using a cellphone sample using SMS-to-web and an Interactive Voice Response (IVR) system of landlines. 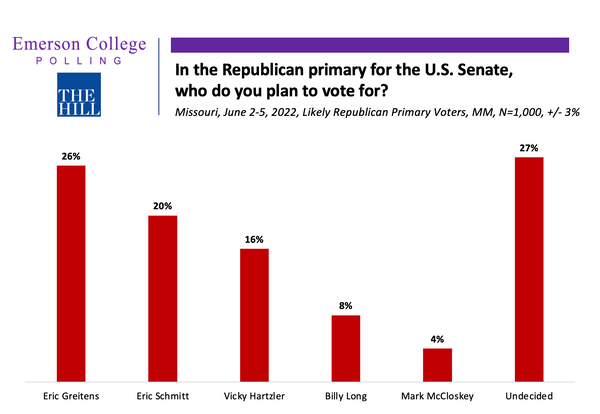