An Emerson College/Nexstar Media poll of Democratic voters in Missouri finds a tight race between former Vice President Joe Biden at 48% and Senator Bernie Sanders at 44%, a statistical dead heat. Six-percent (6%) of voters were undecided or voting for someone else and 2% were voting for Tulsi Gabbard. The poll was conducted March 4-5, 2020, with a sample of n=425 of likely Democratic primary voters and a margin of error of +/- 4.7%. 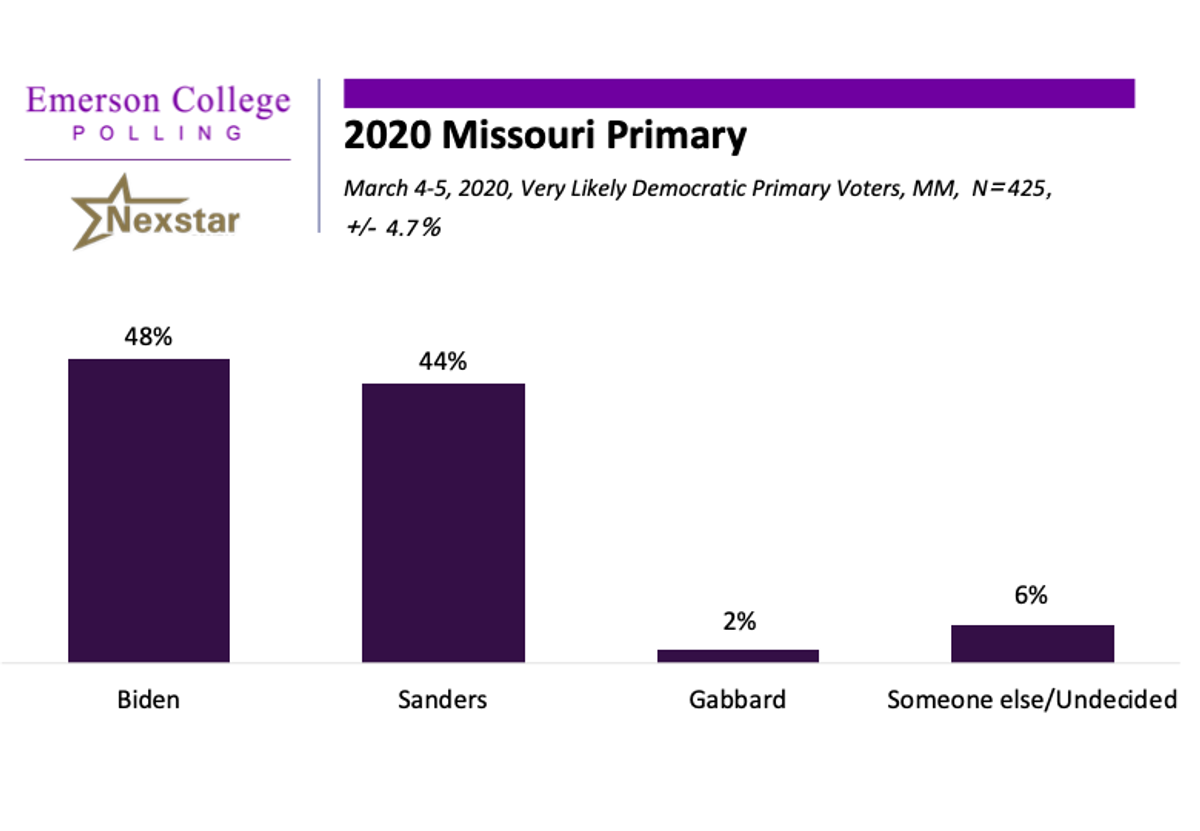 Among white voters, it is a tight race as both Biden and Sanders receive 47% support. While among non-white voters, Biden leads with 50% support followed by Sanders at 36%.

Nearly three-quarters (75%) of voters said their minds were made up regarding who to vote for and 25% said they could still change their mind and vote for someone else. According to this poll, 15% of voters have made up their minds in three days while 46% said they have known who they were voting for since before the Iowa Caucus on February 3rd.

The most important issue for Democratic primary voters is healthcare at 30% with the next three issues being the environment (17%), social issues (16%), and the economy (14%).

A deeper dive into healthcare finds that 43% of voters support Medicare for All, while 27% support a public option. 10% want to keep things as they are, and 21% were undecided on which healthcare policy they would be supportive of. When asked which candidate had the best healthcare policy, Sanders lead with 43% and Biden followed at 40%. 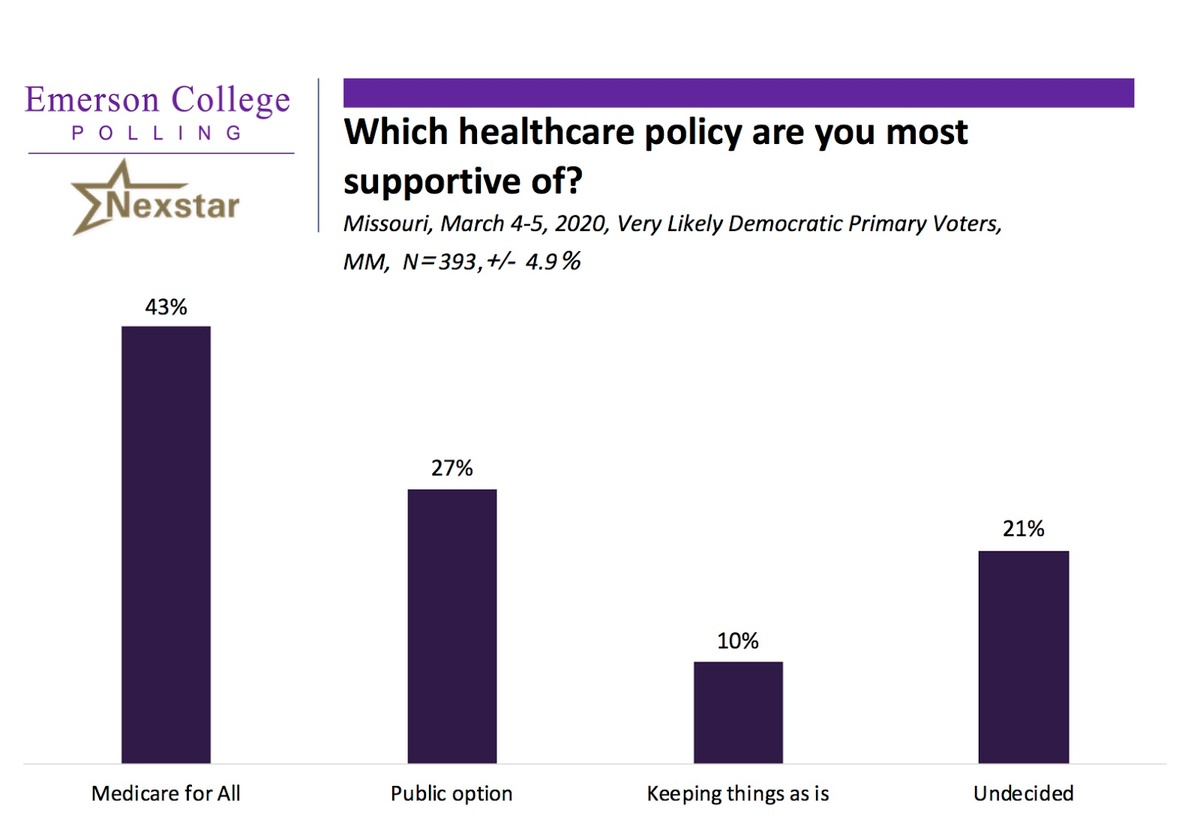 In Missouri, a majority of Democratic primary voters, 60%, believe the US is not prepared to control the Coronavirus, while 21% thought the US was prepared and 19% were undecided.

A majority, 57%, said that Medicaid expansion in Missouri does not do enough for children in poverty. Just 17% said that it does and 26% were unsure.

The Missouri Emerson College/Nexstar poll was conducted March 4-5, 2020. The sample for the Democratic Primary consisted of registered Democratic, Republican, and Independent very likely voters, n=425, with a Credibility Interval (CI) similar to a poll’s margin of error (MOE) of +/- 4.7 percentage points. The data sets were weighted by gender, age, ethnicity, party, education, and region based on a 2016 turnout model. It is important to remember that subsets based on gender, age, party breakdown, ethnicity, and region carry with them higher margins of error, as the sample size is reduced. Data was collected using an Interactive Voice Response (IVR) system of landlines (n=174), SMS-to-online (n=74) and an online panel provided by MTurk (n=177). 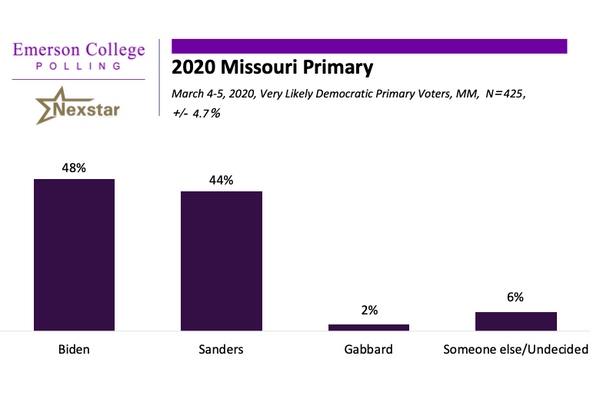 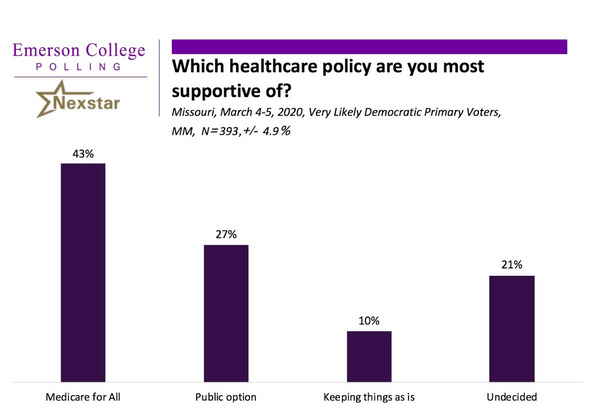 Missouri TI
Download
Related Bios
https://cdn.filestackcontent.com/wUtByJnESd6l7h7oQ8Zw?dl=true
https://cdn.filestackcontent.com/AG3wH2AR3SP2Mo58NZitaz/rotate=exif:true/resize=width:600/wUtByJnESd6l7h7oQ8Zw
Professor Kimball teaches Political and Sports Communication courses in both the undergraduate and graduate programs at Emerson College. He is the director of Emerson Polling and the advisor for the Emerson Pre-Law Society and the Emerson College Polling Society. Kimball is a national pundit quoted in a variety of publications including the Wall Street Journal, Boston Globe, Huffington Post, Washington Post, Fox News, the National Journal, and National Public Radio (NPR).