Minnesota 2020: North Star State in Play for Presidential and US Senate Races 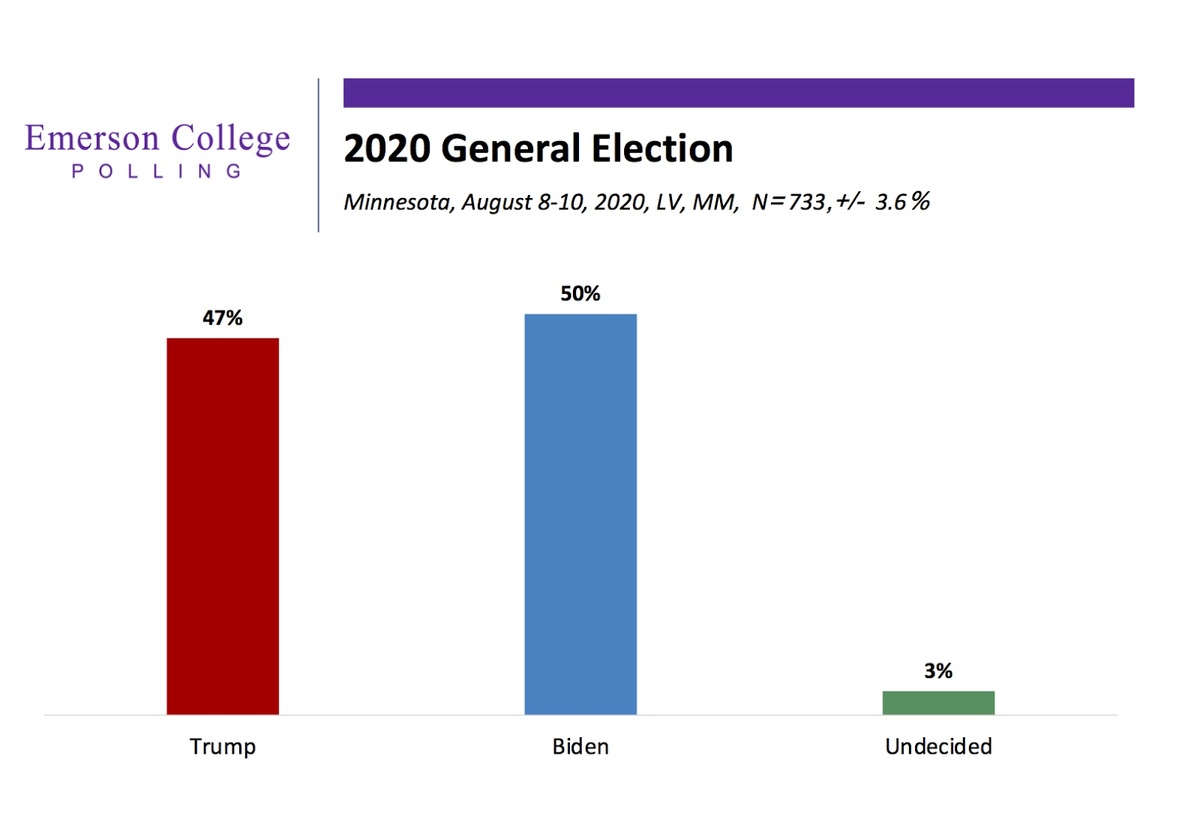 President Trump's approval rating amongst Minnesota voters is slightly underwater, with 46% approval, and 51% disapprove of his job performance, with 3% remaining neutral. Among independent voters, Trump’s approval is at 45% approval, and 47% disapproval.

First-term Governor Tim Walz has a more favorable view, with 50% approving of his job performance, 41% disapproving and 9% holding a neutral opinion on the Governor.

In the race for US Senate, the Democratic incumbent Senator Tina Smith leads by a margin similar to the Presidential race with a 3 point lead of 48% to 45% over the presumptive Republican challenger former Congressman Jason Lewis. Seven-percent (7%) of voters are still undecided.

Spencer Kimball, Director of the Emerson College Poll points out that “in 2016, the Senate races in each state were won by the same party that won the Presidential election in that state, and it appears that the same pattern might emerge in 2020.”

When asked which congressional candidate they would generally lean towards in their district, similar numbers from the Senate race were reflected amongst voters. Statewide, the Democratic party candidate garnered 48% support, the Republican party candidate held 46% support and 7% were undecided.

The idea of a national mask mandate in areas where social distancing is not possible is popular in the North Star State, with 62% of voters supporting such a mandate, and 28% being opposed. 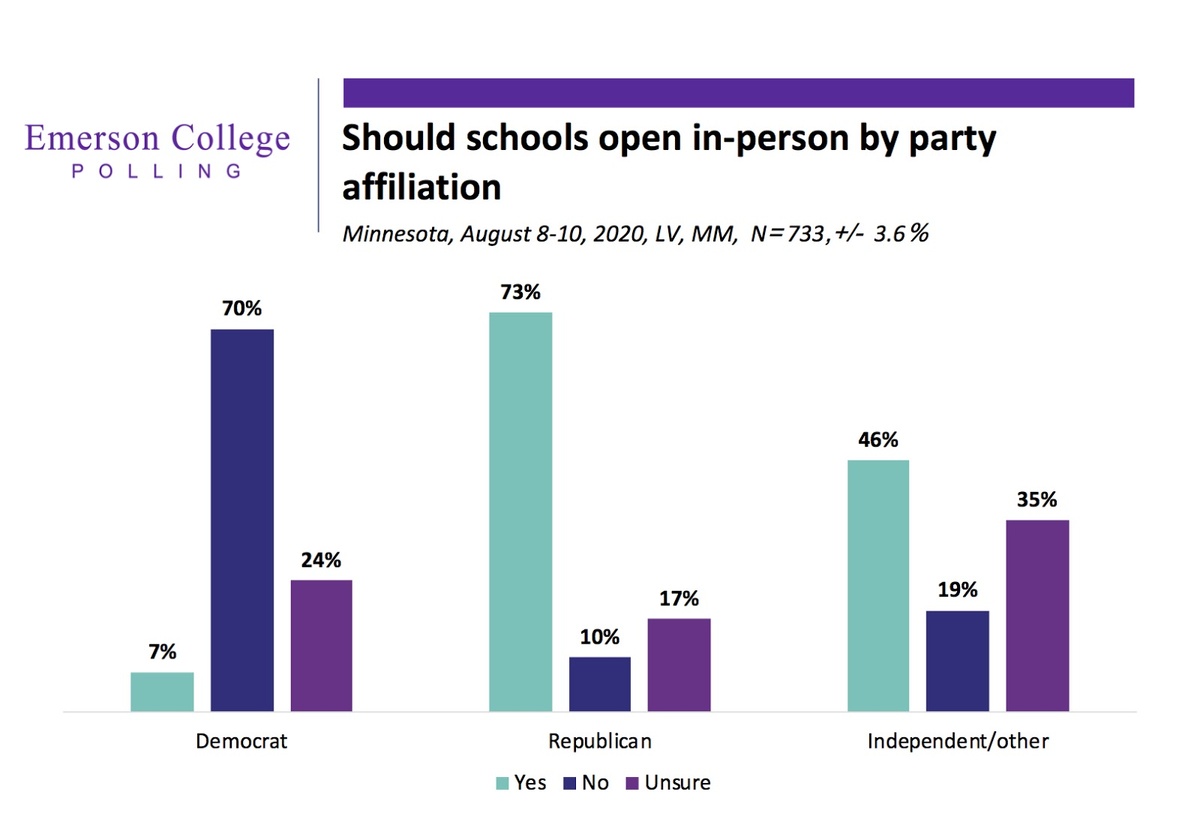 Within this context, a majority of voters, 54%, do not believe that President Trump should require that K-12 schools hold all instruction online in the fall. Twenty-one percent (21%) think that Trump should, and 25% are unsure.

In comparison to 2016 on economic issues, a plurality of voters (46%) say they are financially better off, while 18% report being worse off, and 36% say their financial situation is about the same as it was. By party affiliation, 61% of Republicans say they are better off now, compared to 29% of Democrats and 50% of Independent voters.

Voters were asked if they trust the accuracy of political polling more or less than they did during the 2016 presidential election cycle. A majority of respondents, 51%, reported that they trust polling less, with only 7% saying they trust it more. 42% said there is no difference in their opinion. For those who voted for Trump in 2016, 66% of them said they trust polling less now, while only 35% of Clinton voters are less trusting of polling.

On the issue of riding in driverless cars, a clear majority (70%) of Minnesota voters would not take such a ride, while 30% would.

The Minnesota Emerson College poll was conducted August 8-10, 2020. The sample consisted of likely registered voters, n=733, with a Credibility Interval (CI) similar to a poll’s margin of error (MOE) of +/-3.6 percentage points. Data was collected using a list of 15,000 mobile numbers provided by Aristotle Inc. which accounted for n=642 and an online panel provided by Amazon Mturk of n=91. The data sets were weighted by gender, age, education, based on voter turnout modeling using the 2016 US Census Voting and Registration Supplemental data sets and 2016 official vote results. It is important to remember that subsets based on gender, age, party breakdown, ethnicity, and region carry with them higher margins of error, as the sample size is reduced. 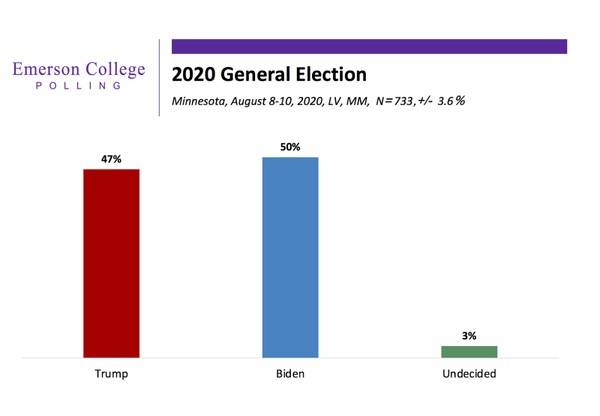 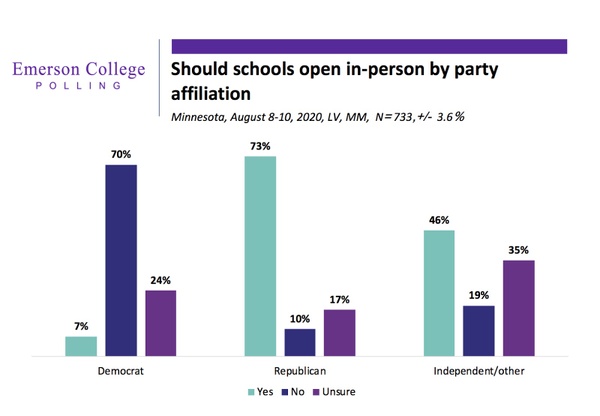