Michigan 2020 Primary - Biden With Strong Lead, but Sanders Waiting in the Wings 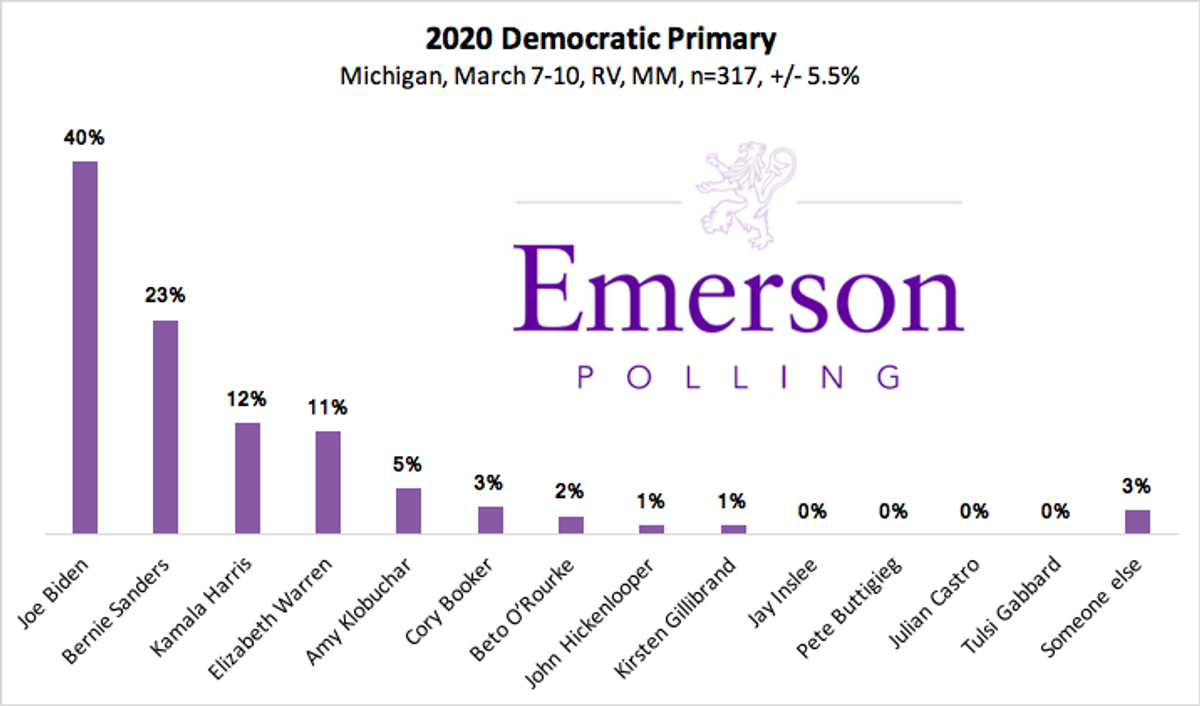 With Biden not officially in the race, the Emerson poll asked Biden voters who their second choice would be; Sanders would be the most popular alternative with 42%, followed by Harris at 23%, and Warren at 18%. Sanders received 50% of the vote in the 2016 Michigan Democratic Primary.

Age remains the dividing factor in the Democratic primary race, as Sanders leads among 18-29 year olds 32%-27% over Biden, but, as consistent with recent Emerson polls in New Hampshire, Iowa, and South Carolina, Sanders’ support drops with older voters as Biden captures over 44% of voters over 30 in the Michigan Democratic primary. 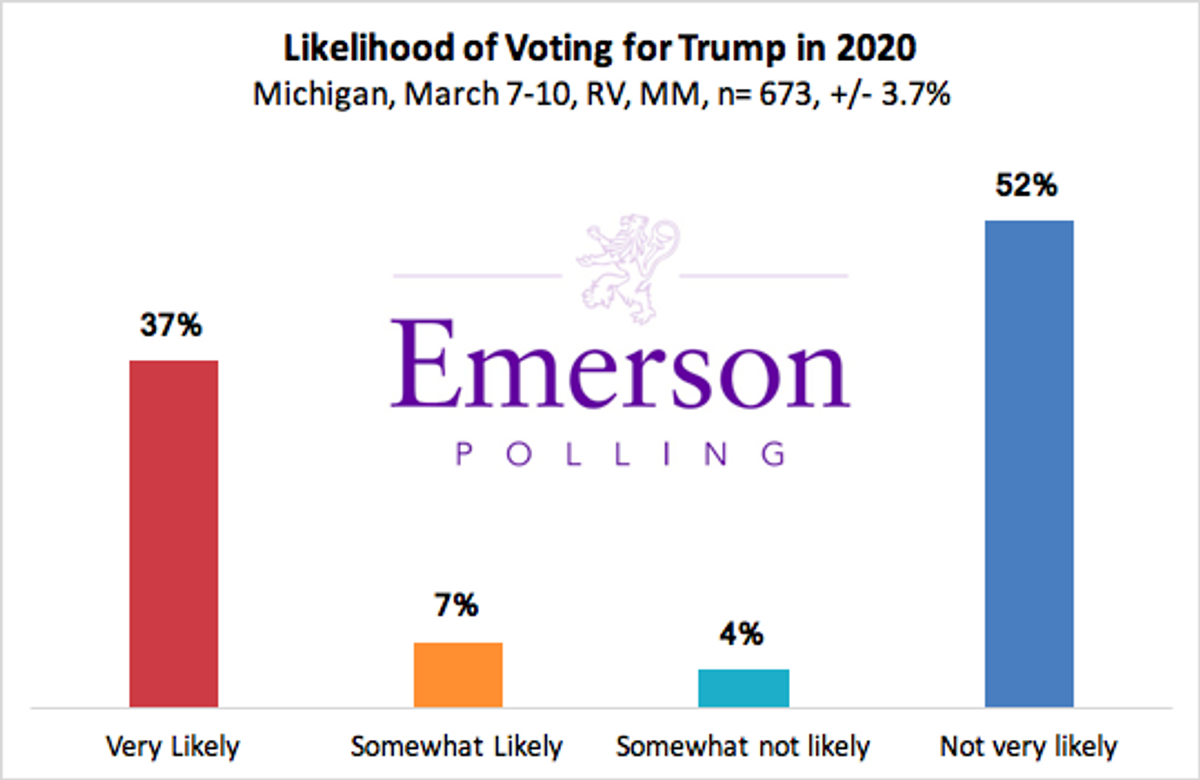 Likewise, voters are generally split on how the President is handling key campaign issues including abortion, immigration, healthcare and foreign and economic policy.(n=673, +/- 3.7%)

A potential bright spot for the President is that 62% of Trump voters in 2016 voted in support of Trump compared with 38% who voted for Trump in opposition to Hillary Clinton. Spencer Kimball, Director of the Emerson Poll, thinks that “once a Democrat is nominated, Trump might be able to boost his own appeal by lowering his opponents through attacks”.

In potential 2020 General Election match-ups, Trump trails the top Democratic candidates, but all are within the poll’s margin of error, except for against Biden where he trails by 8 points. However, significant gender, education and age gaps are emerging as Trump leads with men but trails with women, and Trump leads with less educated voters while Democrats lead with younger voters. Kimball finds that “a larger divide on issues based on age may be playing out in both the primary and general elections. Sanders appears to be the champion of the youth vote in the Democratic primary, while in the general election, older voters are breaking for Trump.”

In a potential US Senate election in 2020, incumbent Democrat Gary Peters is statistically tied with 2018 Republican Senate candidate John James 44% to 43% with 14% undecided. This is the third Emerson poll that suggests incumbent Senators are vulnerable in 2020, with Jeanne Shaheen (D) of New Hampshire and Lindsey Graham (R) of South Carolina both under 50% in potential re-election campaigns.

When asked about the trustworthiness of different media sources, the slogan “as seen on tv” was proven effective as voters ranked television as the most trusted source of information at 28%. Online publications and newspapers each received 14%, radio received 10% and social media received 6%. However, 28% of voters said they do not trust any news sources; a look inside these numbers reveal that 41% of Trump voters do not trust any news source compared to 17% of Clinton voters.

A plurality of voters, 36%, ranked Fox News television as the most trustworthy news source followed by CNN at 19%, 14% each for NBC and MSNBC. ABC came in at 9% and CBS was at 8%. 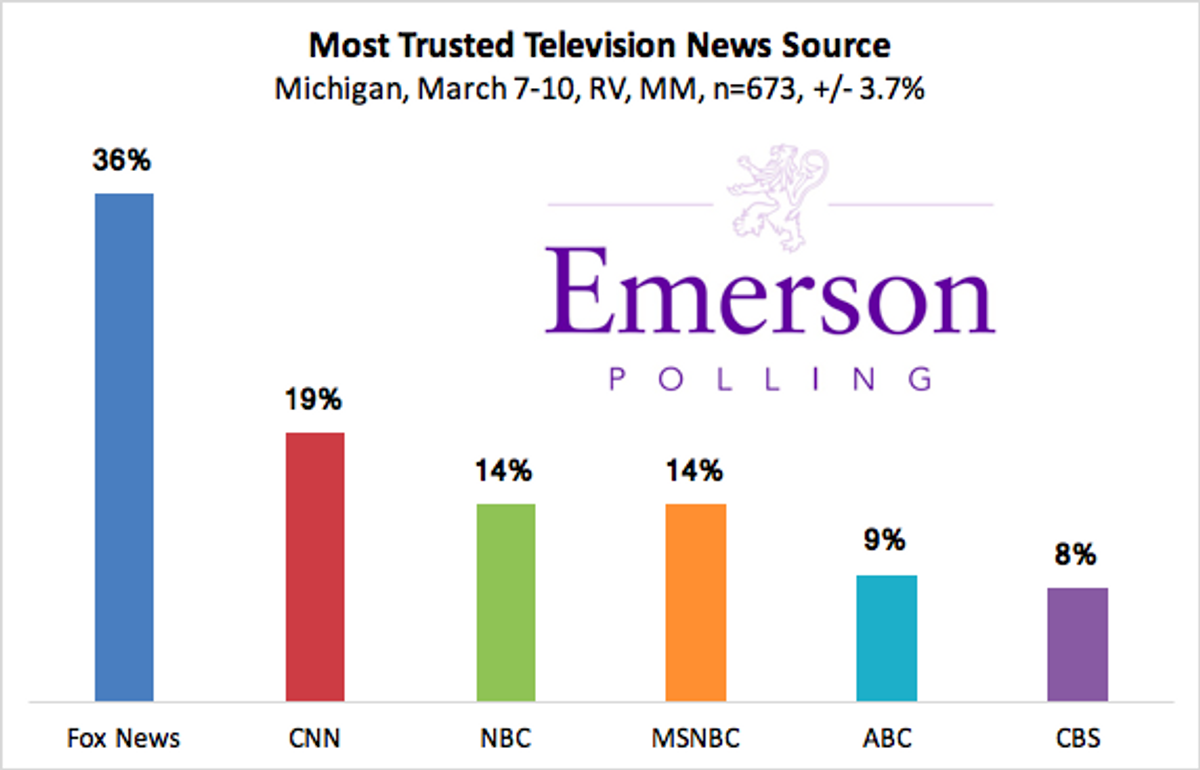 On a follow up study from Schuman and Presser (1977), 12% of voters in Michigan think men are better suited for politics than women. While there was no difference found based on gender, there was a difference between 2016 voters, with 22% of Trump voters agreeing with the statement compared with 3% of Clinton voters.

The Michigan statewide Emerson College poll was conducted March 7-10, 2019 under the Supervision of Assistant Professor Spencer Kimball. The sample consisted of registered voters, n=743, with a Credibility Interval (CI) similar to a poll’s margin of error (MOE) of +/- 3.5 percentage points. The data was weighted based on 2016 voter model, age, ethnicity, gender and region. It is important to remember that subsets based on gender, age, party breakdown, ethnicity and region carry with them higher margins of error, as the sample size is reduced. Data was collected using both an Interactive Voice Response (IVR) system of landlines only (n=520) and an online panel provided by Amazon Turk (n=223). Visit our website at ​ www.emersonpolling.com. 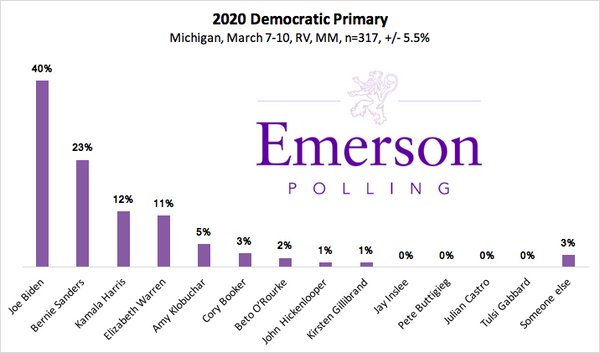 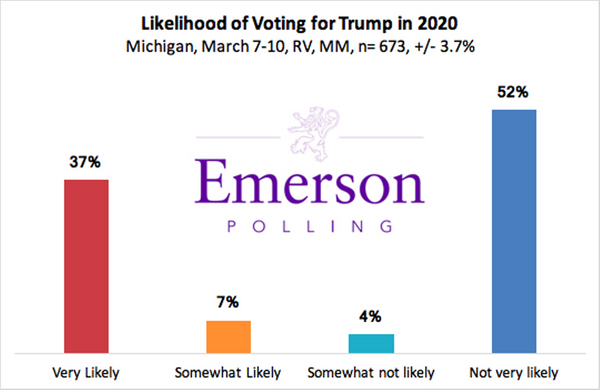 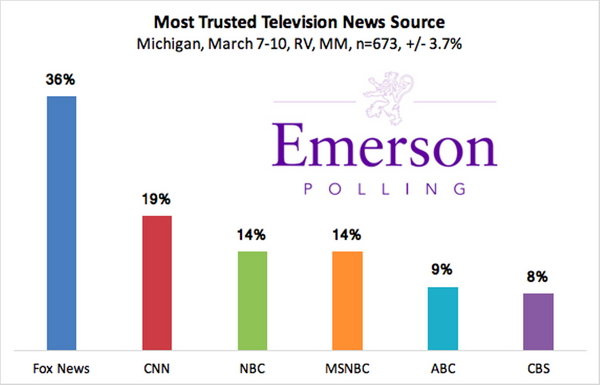 A plurality of voters, 36%, ranked Fox News television as the most trustworthy news source followed by CNN at 19%, 14% each for NBC and MSNBC.
Files