Massachusetts 2020: Kennedy Leading Markey by 16 points in US Senate Race 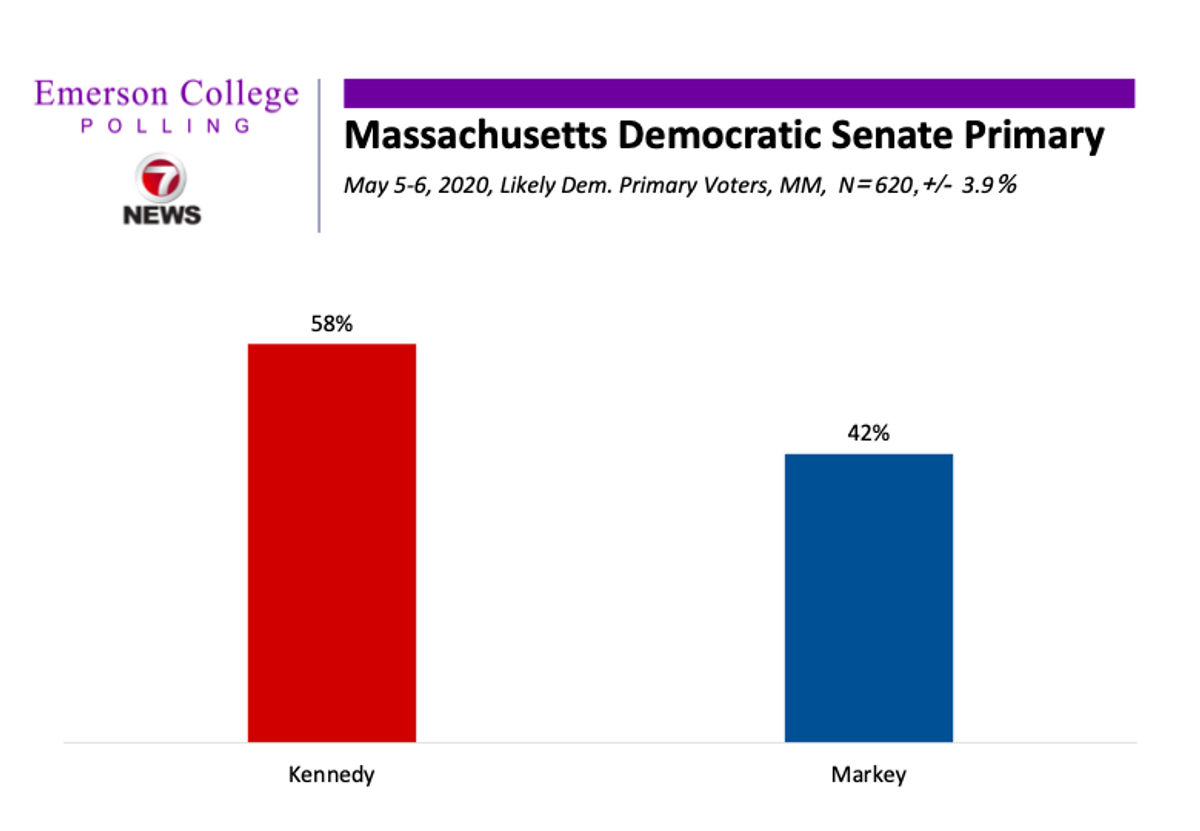 While the lead is significant, 60% of voters said they might change their mind before September. Additionally, with safety concerns due to the coronavirus, a majority (61%) of voters said they would rather vote by mail, while 39% said they still prefer an in-person option to vote.

Spencer Kimball, Director of Emerson College Polling said “Markey has a lot of work to do this summer, especially in the Boston area where Kennedy holds a 30 point lead. With Congresswoman Ayanna Pressley declining to endorse either candidate, Markey appears limited at this time for a game-changer.” 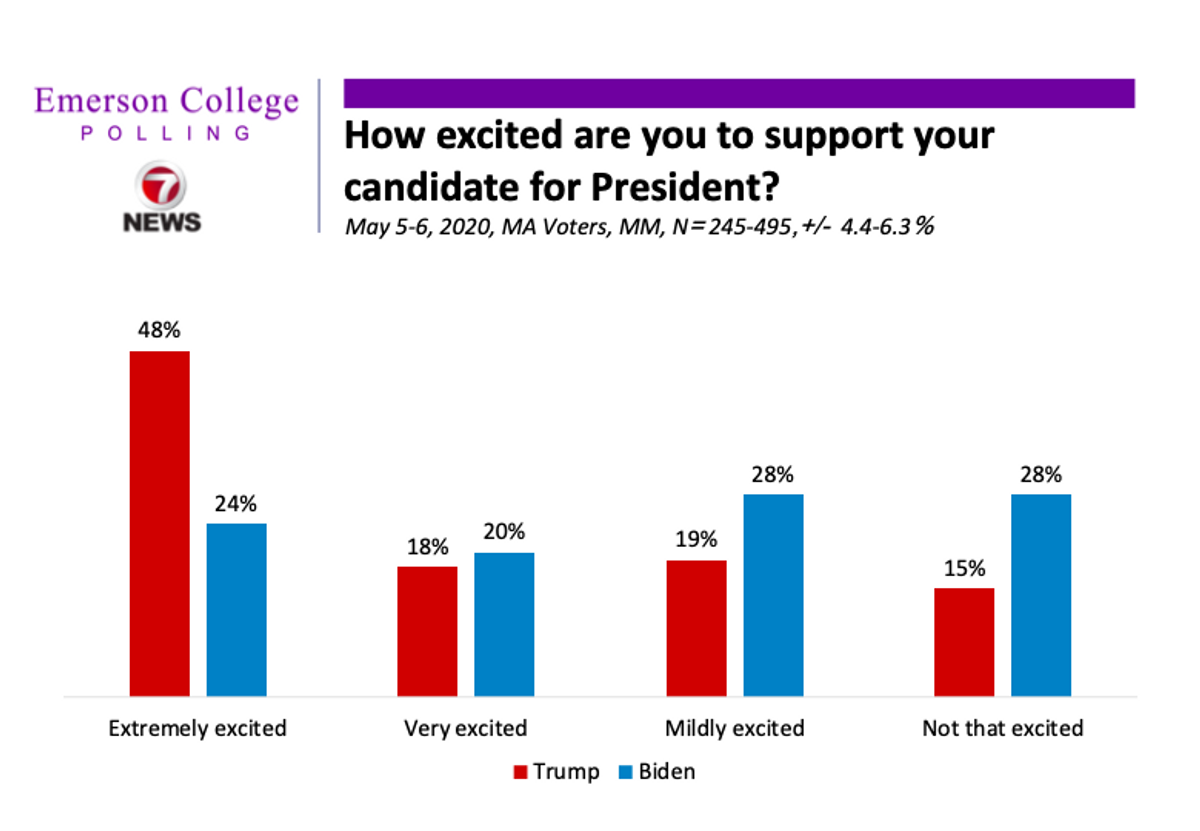 Part of the lack of enthusiasm could be seen in that 49% of Democratic voters would prefer New York Governor Andrew Cuomo as the Democratic nominee, with 51% preferring Biden.

Another concern beyond the lack of enthusiasm for Biden is that only 54% of Massachusetts voters expect him to win the election, despite his holding a 30 point lead in the Commonwealth. 46% believe that Trump will win come November.

The top issue for voters in Massachusetts in deciding who they will vote for is simply “beating Trump” at 36%, followed by 26% reporting the economy as their top issue, and 16% reporting healthcare. On the other end, 9% said re-electing Trump was their most important issue.

There is no consensus in Massachusetts on who Biden should choose as his Vice President. Hometown candidate Senator Elizabeth Warren was the top choice at 29%, followed by Sen. Kamala Harris at 21% and Sen. Amy Klobuchar at 17%. No other candidate was above 6%, while 23% said they would like someone else. 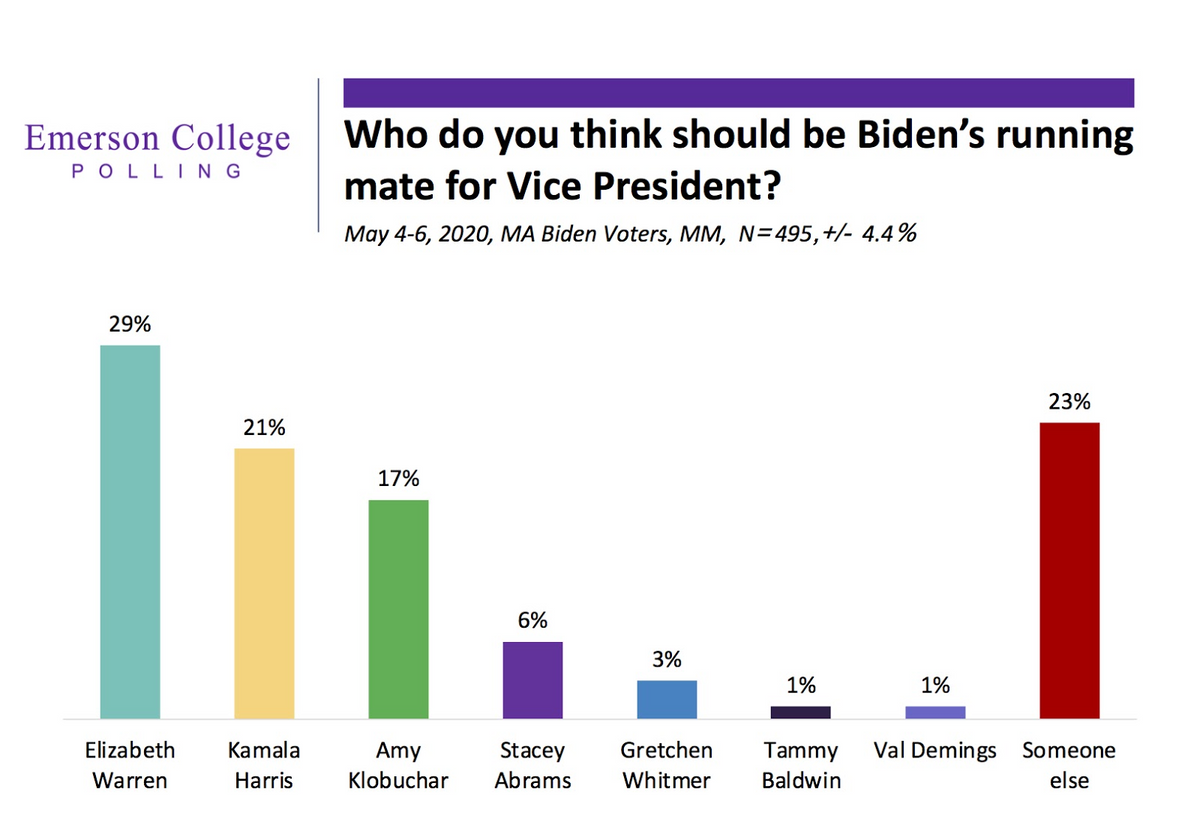 Over a third (36%) of voters in Massachusetts report that either themselves or someone in their household lost their job as a result of the virus. Younger individuals between 18-29 years report the highest rate of job loss (45%), followed by those aged 30-49 (40%). Those who identify as Hispanic or Latino also report higher rates of job loss in the household, at 47%.

Over a third (38%) of Massachusetts respondents said they or someone they know has tested positive for coronavirus.

Starting on May 6th, Governor Baker has mandated that all Massachusetts residents are required to wear face masks or coverings while in public places where social distancing is not possible. This new requirement has been met positively by voters, as 84% say the order is necessary and 15% say it is unnecessary.

The Massachusetts Emerson College/7News poll was conducted May 5-6, 2020. The sample consisted of registered Democratic, Republican, and Independent voters, n=740, with a Credibility Interval (CI) similar to a poll’s margin of error (MOE) of +/- 3.5 percentage points. The data sets were weighted by age, ethnicity, education, party, and region. It is important to remember that subsets based on gender, age, party breakdown, ethnicity, and region carry with them higher margins of error, as the sample size is reduced. Data was collected using an Interactive Voice Response (IVR) system of landlines (n=531) and an online panel provided by MTurk (n=219). 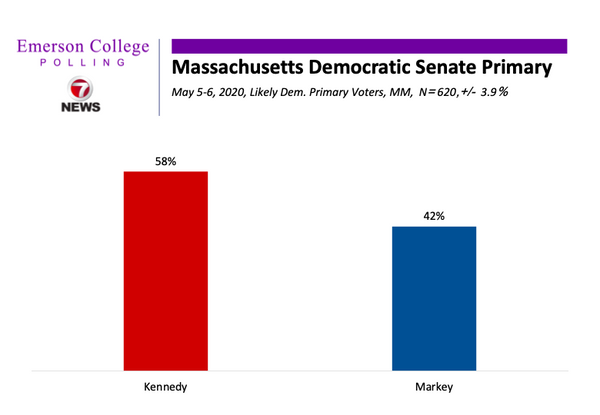 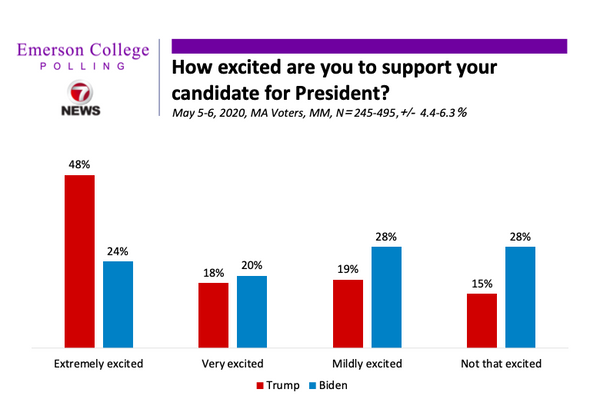 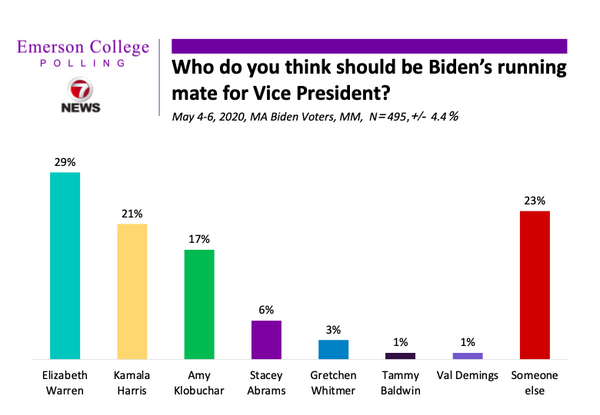