A new Emerson College/Nexstar National Poll finds 70% of respondents very worried, or somewhat worried that they or an immediate family member may catch Coronavirus. Only 22% reported to be not too worried, and 7% are not worried at all. (MM, registered voters, n=1,100, +/-2.9%) 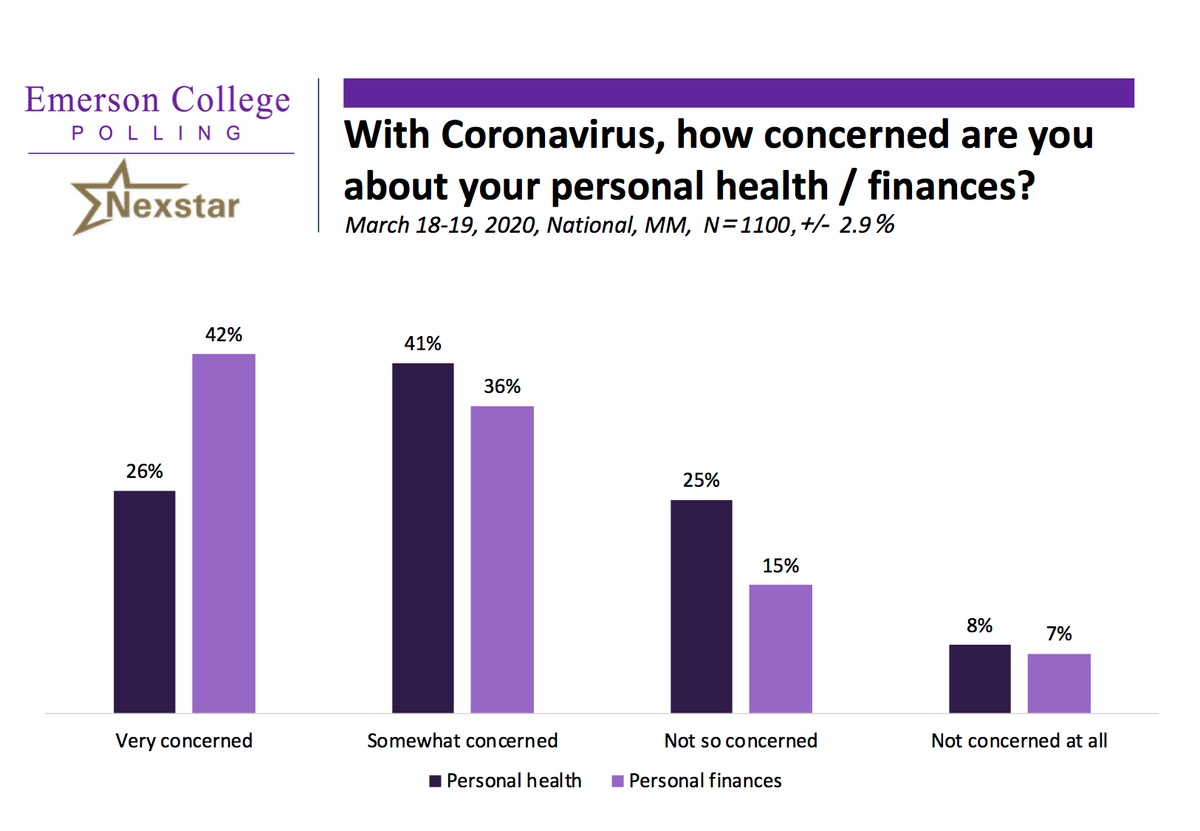 Overall, 46% of Americans approve of the job Donald Trump is doing as President, 45% disapprove, and 9% have no opinion. The approval rating is down from last month when the Emerson Poll had the President's Approval at 48%, and disapproval at 44%.

A plurality (49%) approve of the job that Trump is doing in handling the Federal Government’s response to the outbreak of the Coronavirus, with 41% who disapprove.

Among Democrats, 68% disapprove, and among Republicans, 84% approve of the way he is handling the response. Independents were more split, with 46% who disapprove and 44% who approve.

Spencer Kimball, Director of Emerson College Polling, adds: “voters appear to have a stronger approval for President Trump’s handling of the Coronavirus outbreak than his general approval as President. This suggests during this crisis when voters are looking for strong leadership, the President has an opportunity to win over some of his opposition.”

As COVID-19 spreads across America, a slight majority of the country (51%) believes that the United States is doing everything it can to prevent further cases of coronavirus, while 49% believe more should be done.

A plurality (44%) of voters are somewhat confident in the ability of local hospitals to respond effectively to the virus as compared to 19% who are very confident. In contrast, 29% said they are not so confident; 9% are not confident at all.

Voters were split when asked which presidential candidate they trust more to handle the Coronavirus crisis, 51% said Joe Biden and 49% said President Trump.

The poll also examined the Democratic primary, and found Vice President Joe Biden with a double-digit lead over Senator Bernie Sanders. Biden receives 54% support, compared to Sanders at 42%. The poll also included Rep. Tulsi Gabbard, as it was conducted before she dropped out of the race, and she received 4% support. (MM, registered Democratic Primary voters, n=519, +/-4.3%) 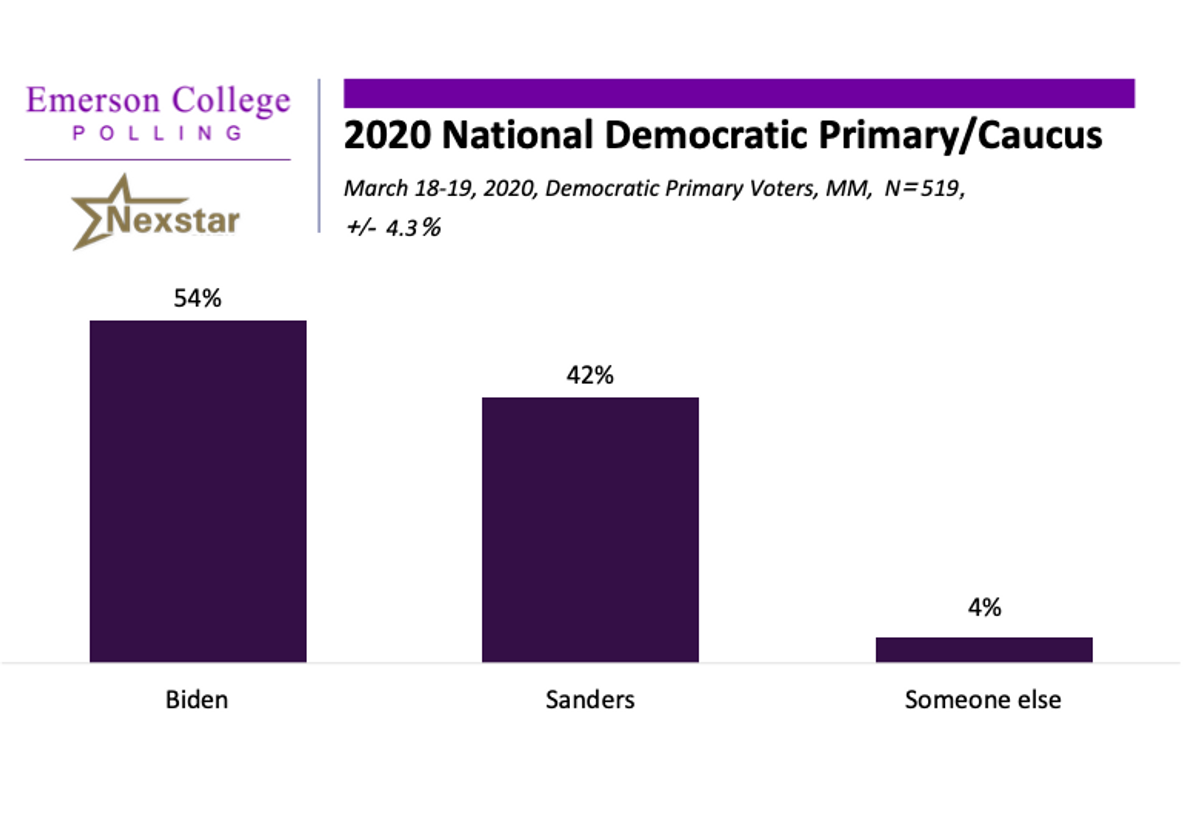 This poll is a bounce-back for Biden, who found himself trailing in the February Emerson poll by seven points.

Candidate support in the primary continues to be driven by a generational divide, as Sanders leads among voters under 50, with 60% support to Biden with 36%. Among voters 50 and older, Biden leads with 76% support, compared to Sanders at 17%.

In head to head general election matchups, Biden and Sanders both lead President Trump 53% to 47%.

The plurality (34%) of voters say that the economy is the single most important issue that factors into their vote decision in the Presidential election, followed by electing someone who will beat Trump (19%), and health care (17%).

When asked what Television media source they trusted the most for information on the Coronavirus, 27% of respondents said cable news, 26% said broadcast news, 22% said public media sources like PBS or CSPAN, and 25% said none of those options.

The March National Emerson College/Nexstar poll was conducted March 18-19, 2020. The sample consisted of registered Democratic, Republican, and Independent voters, n=1,100, with a Credibility Interval (CI) similar to a poll’s margin of error (MOE) of +/- 2.9 percentage points. The data sets were weighted by gender, age, ethnicity, education, and region. It is important to remember that subsets based on gender, age, party breakdown, ethnicity, and region carry with them higher margins of error, as the sample size is reduced. Data was collected using an Interactive Voice Response (IVR) system of landlines (n=645) and an online panel provided by MTurk (n=455). 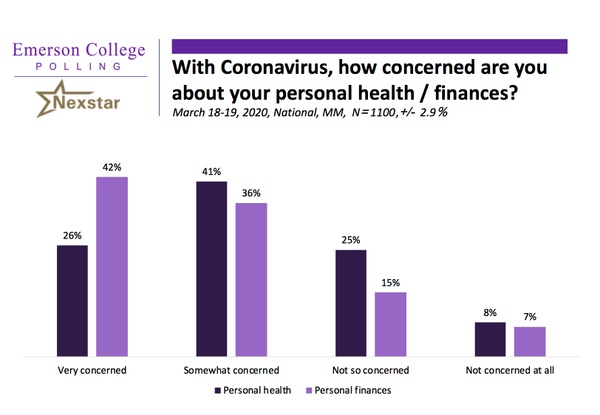 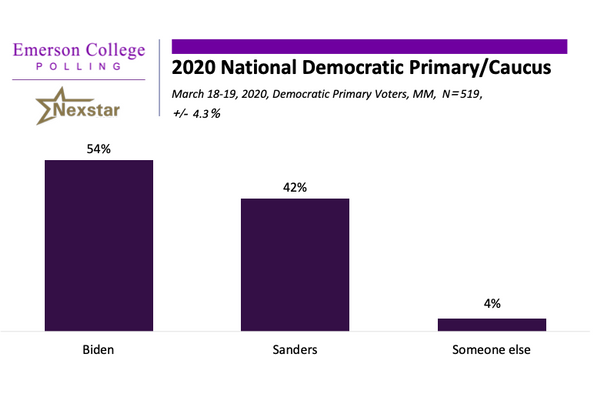