June National Poll: All Eyes on the Democratic Debates; Biden, Sanders and Warren Separate From the Field

A new national poll finds the Democratic field coming into focus as the candidates prepare for this week’s first debates. Joe Biden continues to hold his announcement bounce, and has gained a point since May - now holding 34% of the vote, followed by Senator Bernie Sanders who moved up 2 points to 27%. Senator Elizabeth Warren has broken away from the rest of those running, into 3rd place - improving from 10% of the vote up to 14%. Senator Kamala Harris comes in fourth with 7%, Mayor Pete Buttigieg is in fifth with 6%, and Senator Cory Booker follows in sixth with 3% of the vote. All other candidates poll at 1% or lower. The data was collected June 21-24, and has a margin of error of +/-4.5% for the Democratic primary.

Voters are excited in the lead up to the first Democratic Debates, being held on June 26 and 27th, with 72% saying they plan on tuning in to watch the 20 candidates. The most interest lies with Democratic primary voters, of which 85% plan to watch. 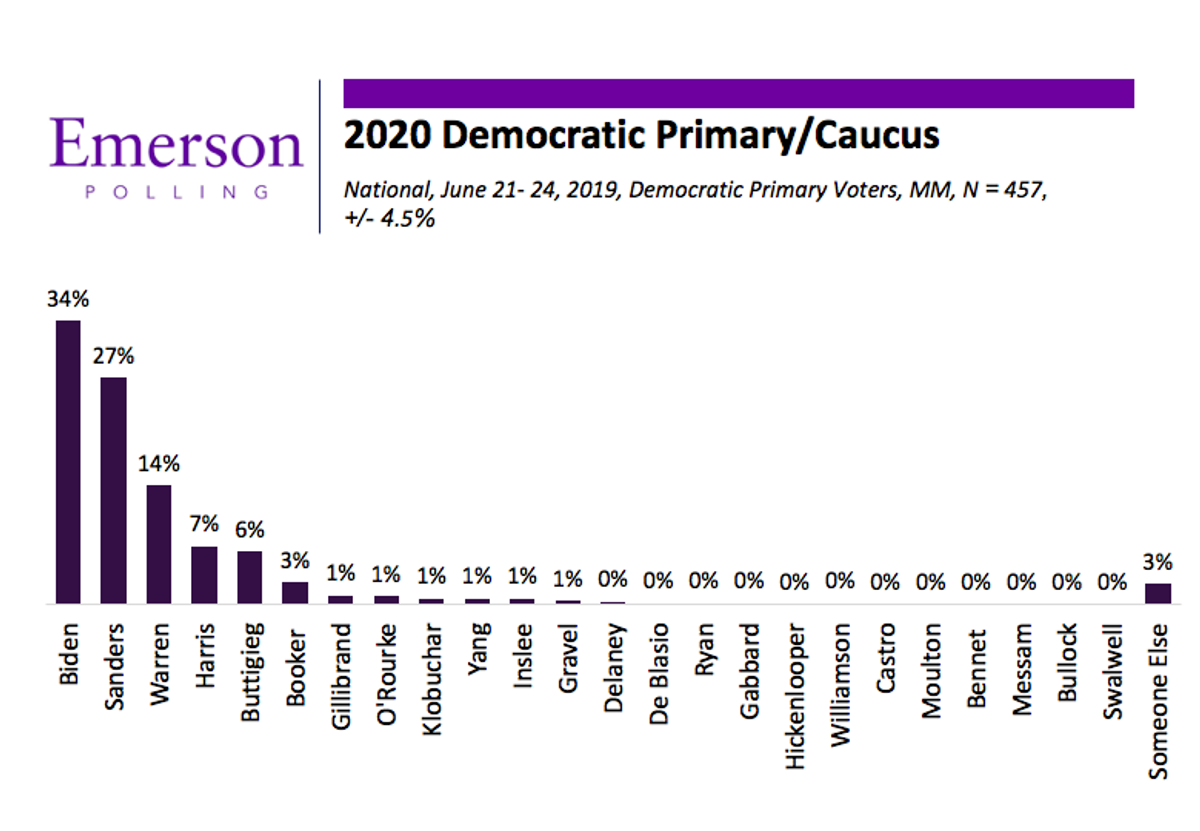 There is still room for movement within the primary race, as a majority of Democratic primary voters, 56%, said there is a chance they could change their mind and vote for someone else. Spencer Kimball, Director of the Emerson Poll, points out that, “similar to our other polls, Biden and Sanders voters are the most loyal with 50% to 55% saying they are set on their candidates. Comparatively, 33% of Warren, 18% of Harris and 17% of Buttigieg voters say they will stick with their current choices, this suggests that about 30% of the Democratic electorate are spoken for and another 30% leaning toward the top two candidates as of now leaves a narrow lane for another candidate to grab a plurality of the vote.”

President Trump maintains a steady approval rating of 43%, while his disapproval has dropped a point since last month to 48%. Their continues to be a gender divide regarding the President: among males 47% approve and 47% disapprove, as compared to females where 49% disapprove and 39% approve. Trump continues to hold a strong lead in the primary match-up against former Governor Bill Weld - 83% to 17% (n=407, +/- 4.9%).

In head to head match-ups, Trump trails all his Democratic opponents with Biden and Sanders holding 10 point leads 55% to 45%, Warren leading by 6, and Buttigieg and Harris leading by 4. 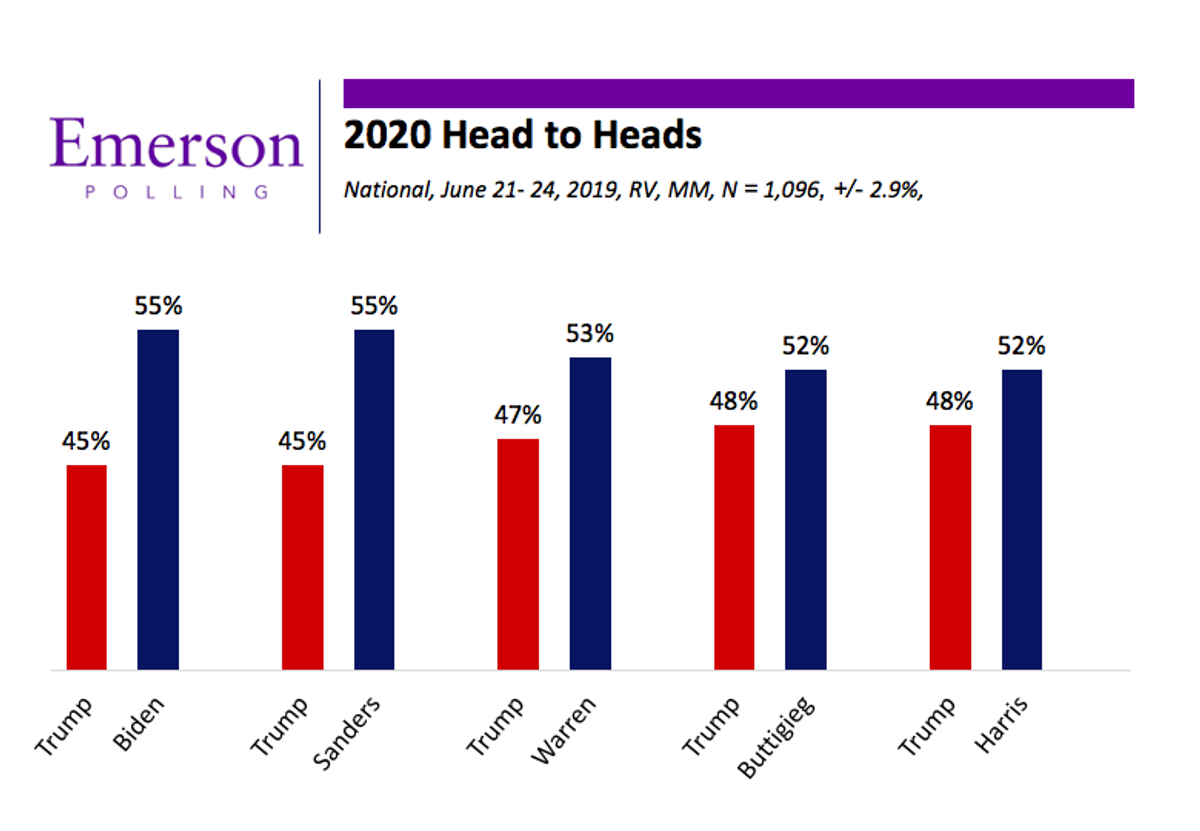 A majority of voters, 57%, said they think the current Presidential primary system should stay the same, with groups of states holding their primary or caucus on different days over the course of several months. 43% would like a change, advocating for a single day in which a national primary is held for all states. The support for the system staying the same varied slightly across all four regions of the country, with the greatest support in the Midwest at 65% and least in the Western states at 53%

Recently, the Democratic frontrunner Joe Biden changed positions on the Hyde Amendment which prohibits federal funds from being used to fund abortions with some exceptions. Overall 55% of voters support the Hyde Amendment, 45% oppose. Among Democrats, 43% support and 57% oppose, as contrasted to 75% of Republicans who support, and 25% who oppose the amendment. However, there is no gender divide on this issue, with 57% of men and 54% of women in support.

The national Emerson College poll was conducted June 21-24, 2019 under the Supervision of Professor Spencer Kimball. The sample consisted of registered voters, n=1,096, with a Credibility Interval (CI) similar to a poll’s margin of error (MOE) of +/- 2.9 percentage points. The data was weighted by age, gender, region, income, and education based on 2016 turnout modeling. It is important to remember that subsets based on gender, age, party breakdown, ethnicity and region carry with them higher margins of error, as the sample size is reduced. Data was collected using both an Interactive Voice Response (IVR) system of landlines only (n=697) and an online panel provided by Amazon Turk (n=399). 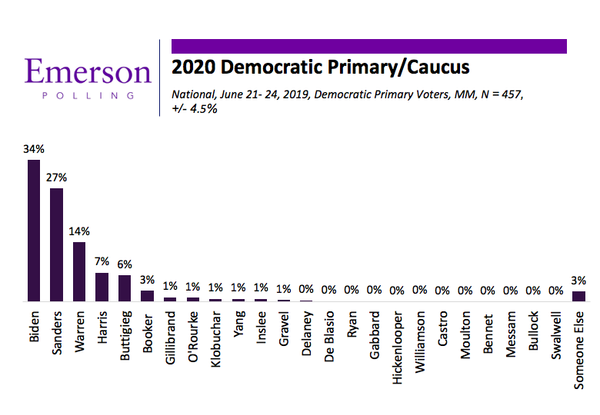 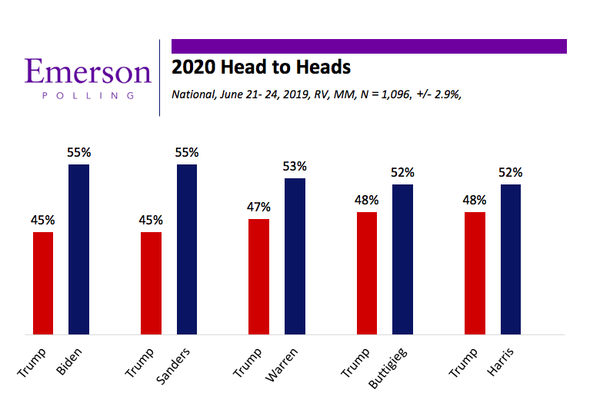