In Emerson’s latest poll, former Vice President Joe Biden continues to lead the Democratic Primary by a significant margin. Biden’s numbers increased slightly to 33% from the last Emerson national poll in which Biden received 30% of the vote. Sen. Bernie Sanders had the largest bounce of any candidate, increasing by 5 points to 20%, Sen. Elizabeth Warren dropped a point to 14% and Sen. Kamala Harris dropped 4 points to 11%. The only other candidates above 3% are Mayor Pete Buttigieg at 6% and former Congressman Beto O’Rourke at 4%. Data was collected July 27-29 of 520 Democratic primary voters, +/- 4.2% margin of error. 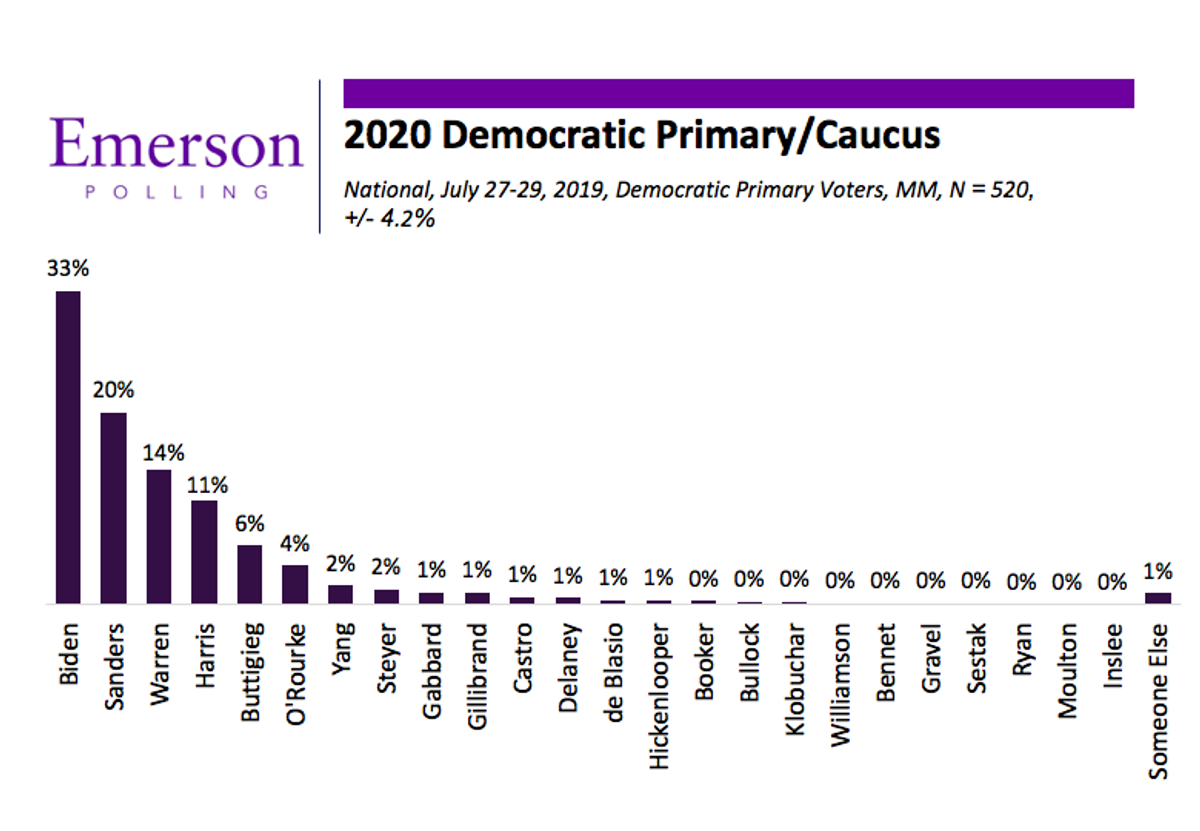 President Trump’s job approval improved slightly from early this month and is now at 45% approval and 46% disapproval. His support within the Republican party continues to be strong as Trump dominates a potential primary against former Massachusetts Governor Bill Weld 91% to 8%. The Republican primary poll was n=467 with a +/-4.5%.

In potential head to head matchups, President Trump runs slightly closer to some of his potential Democratic opponents than in previous Emerson polls. Biden and Sanders each lead Trump by 2 points at 51% to 49%, Warren is tied at 50% with Trump, and Harris and Buttigieg both trail by 4 points, 48% to 52%. Spencer Kimball, Director of the Emerson Poll, notes how “this is the second poll where Biden has seen his general election support dip since the first debate. This may have to do with the more liberal positions he took, but in the last 3 weeks his head to head matchups with Trump have tightened 8 points.” 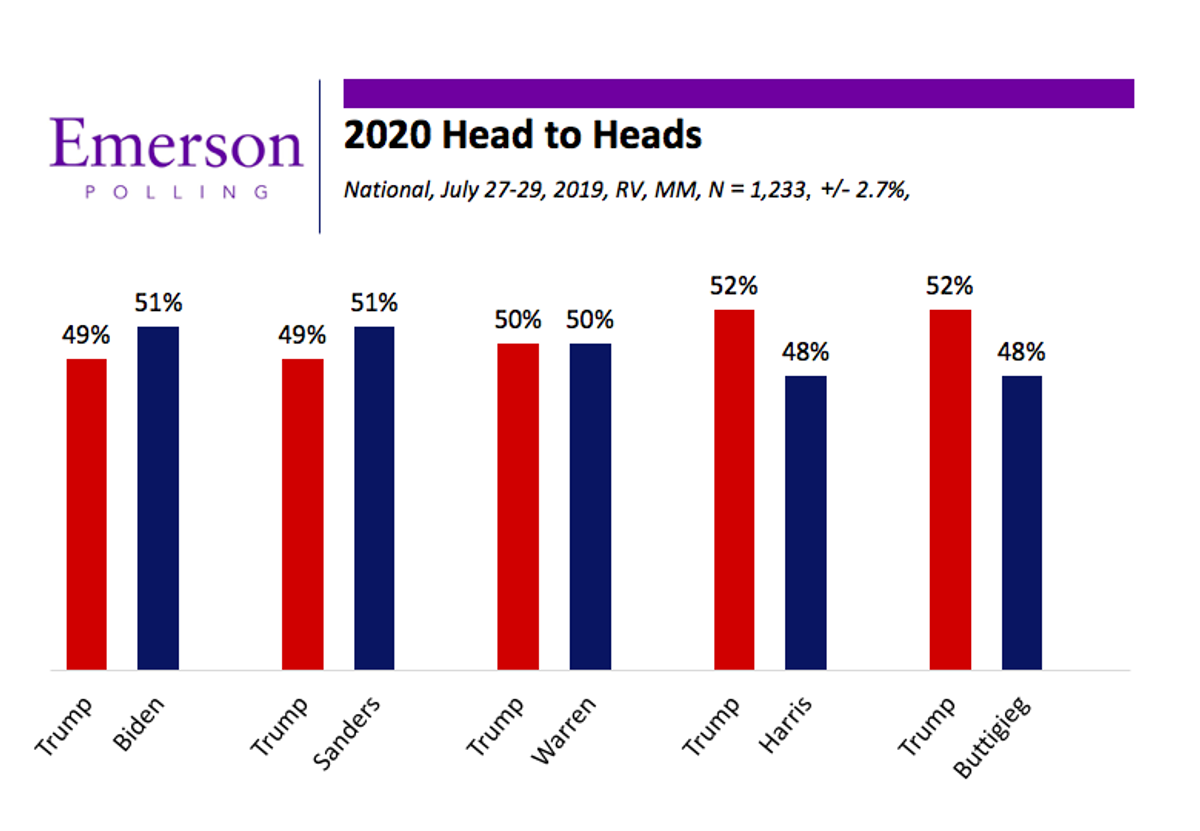 When asked to choose the most important issue in determining their vote for president, immigration tops the list for voters at 24%, followed closely by the economy at 22%. The issue of impeachment jumped from under 5% in the last two Emerson polls to the third most important issue, at 12%.

There is a party divide on this question, as among Republican primary voters, 40% chose immigration as the most important issue, followed by the economy at 31%, and gun control and social issues at 8%. Among Democratic primary voters, impeachment is the most important issue at 19%, followed by healthcare at 16%, and social issues and the economy at 13%.

Among those who voted for Donald Trump in 2016, 41% say their most determining issue for their vote in 2020 is immigration, followed by the economy at 28%, whereas the plurality of Clinton voters say impeachment is the most important issue at 21%, followed by health care at 15%. Kimball notes “the Democrats are taking a gamble with an increased emphasis on impeachment proceedings following the Mueller hearings, considering how effective their Healthcare argument was in 2018. It would seem to make sense to stick with that issue, but now the party seems torn between the two.”

Voters appear less excited for the second set of Democratic debates coming up this week, with 57% of respondents planning on watching some or part of the debates compared to the 72% who planned to watch the June debates.

The national Emerson College poll was conducted July 27-29, 2019 under the Supervision of Emerson Polling Director Assistant Professor Spencer Kimball. The sample consisted of registered voters, n=1,233, with a Credibility Interval (CI) similar to a poll’s margin of error (MOE) of +/- 2.7 percentage points. The data was weighted by age, region, income, and education based on 2016 turnout modeling. It is important to remember that subsets based on gender, age, party breakdown, ethnicity and region carry with them higher margins of error, as the sample size is reduced. Data was collected using both an Interactive Voice Response (IVR) system of landlines only (n=794) and an online panel provided by Amazon Turk (n=439). 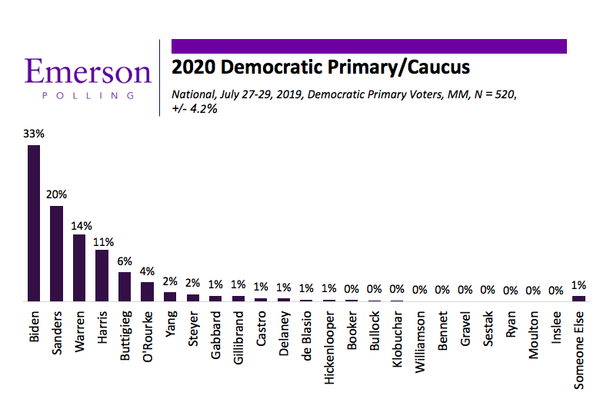 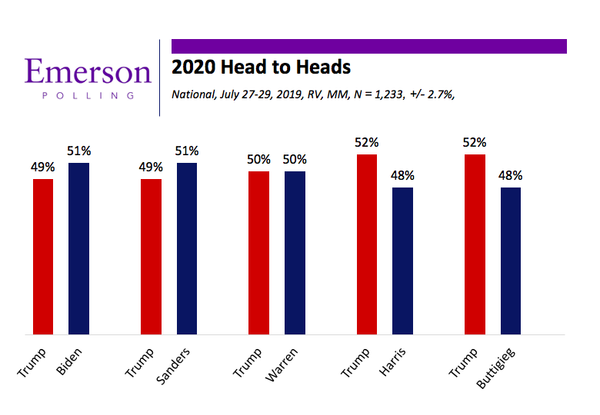