In the latest WHDH 7 News/Emerson College Iowa Poll, former Vice President Joe Biden has maintained his support and lead in the Iowa Caucus with 23% of the vote. Senator Bernie Sanders is the runner up with 22%, followed by Pete Buttigieg with 18% of the vote. Senator Elizabeth Warren has lost ground, receiving 12% support. Amy Klobuchar has seen her popularity grow with 10%, followed by Cory Booker with 4%, and Tom Steyer with 3%. Michael Bloomberg, Tulsi Gabbard, and Andrew Yang received 2% each. The rest of the field had no support. (December 7-10, MM, Democratic Caucus, n=325, +/-5.4%) 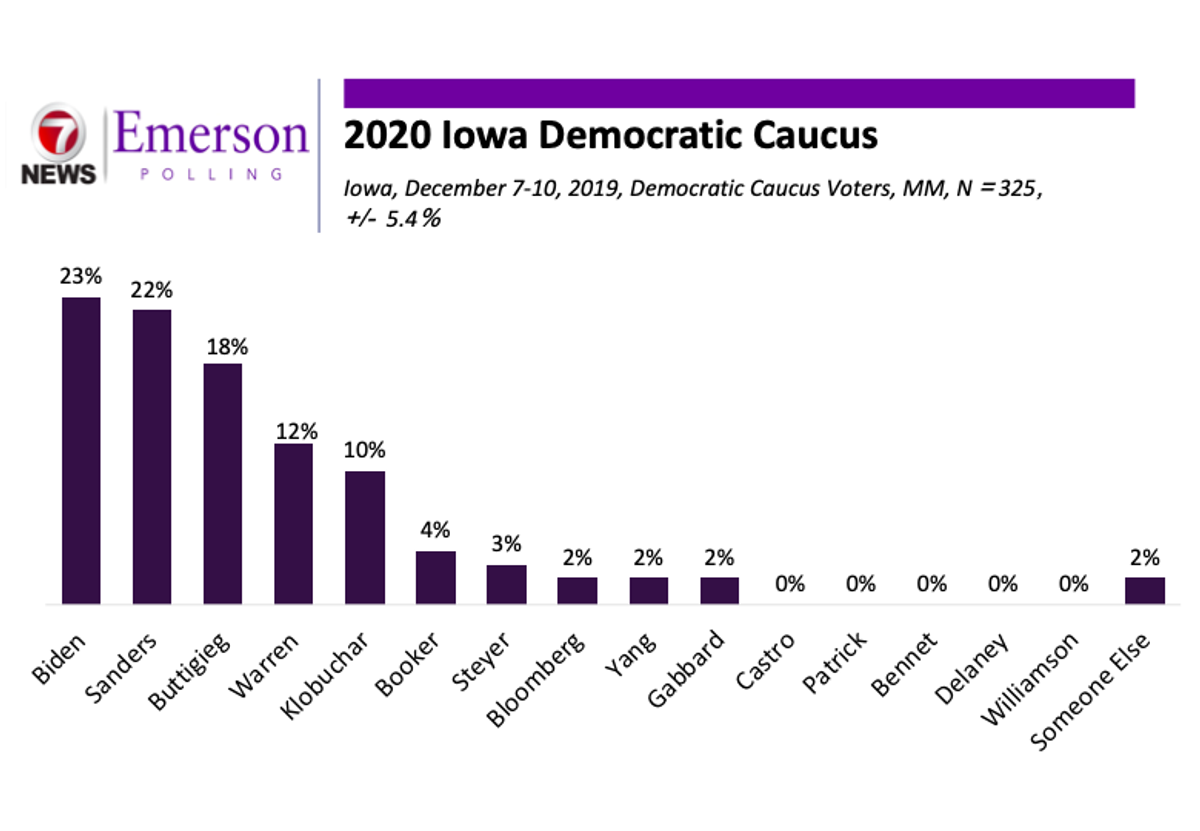 The most movement in this poll, as compared to the last Emerson Poll in October, is Warren’s downward slide from frontrunner status, and Sanders’ subsequent gain. Warren and Biden had 23% each in October. While Biden held his numbers in this poll, Warren fell 11 points. Sanders may have benefited from Warren’s loss of support, surging to 22% from 13% of the vote in October. Buttigieg maintained steady support over the last two months, gaining slightly from 16% in October to his current 18% of the vote. Amy Klobuchar experienced a huge leap from noncompetitive numbers - just 1% in October - to 10%.

Continuing the trend evident in previous Emerson polls, Sanders leads among those under 50 with 32% support. Following him in that group, is Warren with 16%, Buttigieg with 13%, Biden with 11% and Klobuchar with 8%. Among those 50 and over, Biden leads with 36% support, followed by Buttigieg with 23%, Klobuchar with 13%, Sanders with 11% and Warren with 8%.

Respondents were asked to identify their second choice candidate. 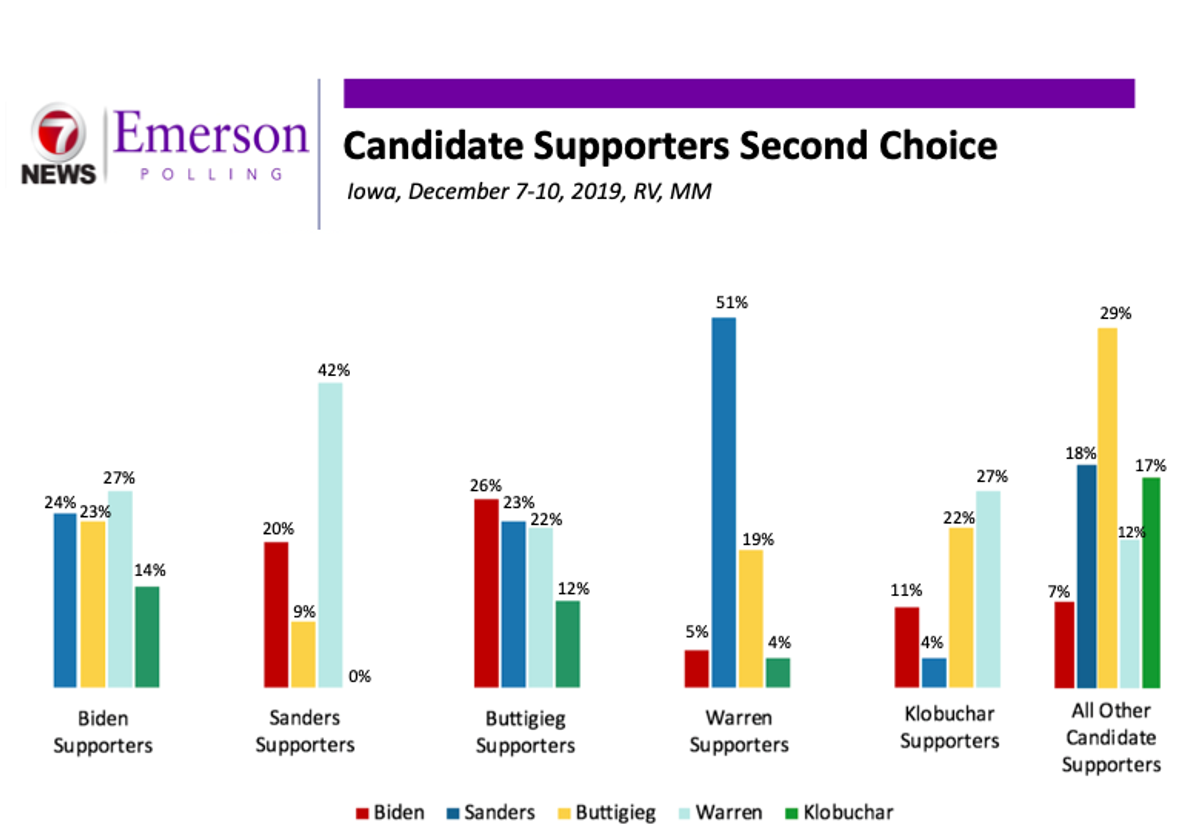 According to Spencer Kimball, Director of Emerson Polling, “the second choice question suggests that Mayor Pete might be in better shape than his 18% because nearly 1 in 3 voters who are initially supporting a less viable candidate breaks towards Pete as their second option.”

A plurality of Democratic primary voters named Sanders as having the best healthcare policy, at 31%. Following him, 19% said Buttigieg has the best policy, 18% said Biden, 13% said Warren, and 9% said Klobuchar. Sanders also held a plurality lead when voters were asked which candidate has the best higher education plan, with 28%, followed by Warren with 20%, Buttigieg with 16%, Biden with 13%, and Klobuchar with 10%.

Mirroring a larger trend in the 2020 Democratic primary, the responses varied significantly by age. More than half of respondents between 18 and 29 years of age said Sanders’ healthcare plan was the best, at 55%. Meanwhile, just 10% of those above 65 years of age had the same opinion of Sanders plan. The same age disparity carried into the higher education plan: 47% of those 18-29 said Sanders’s policy was the best, while just 8% of those 65 and over agreed. 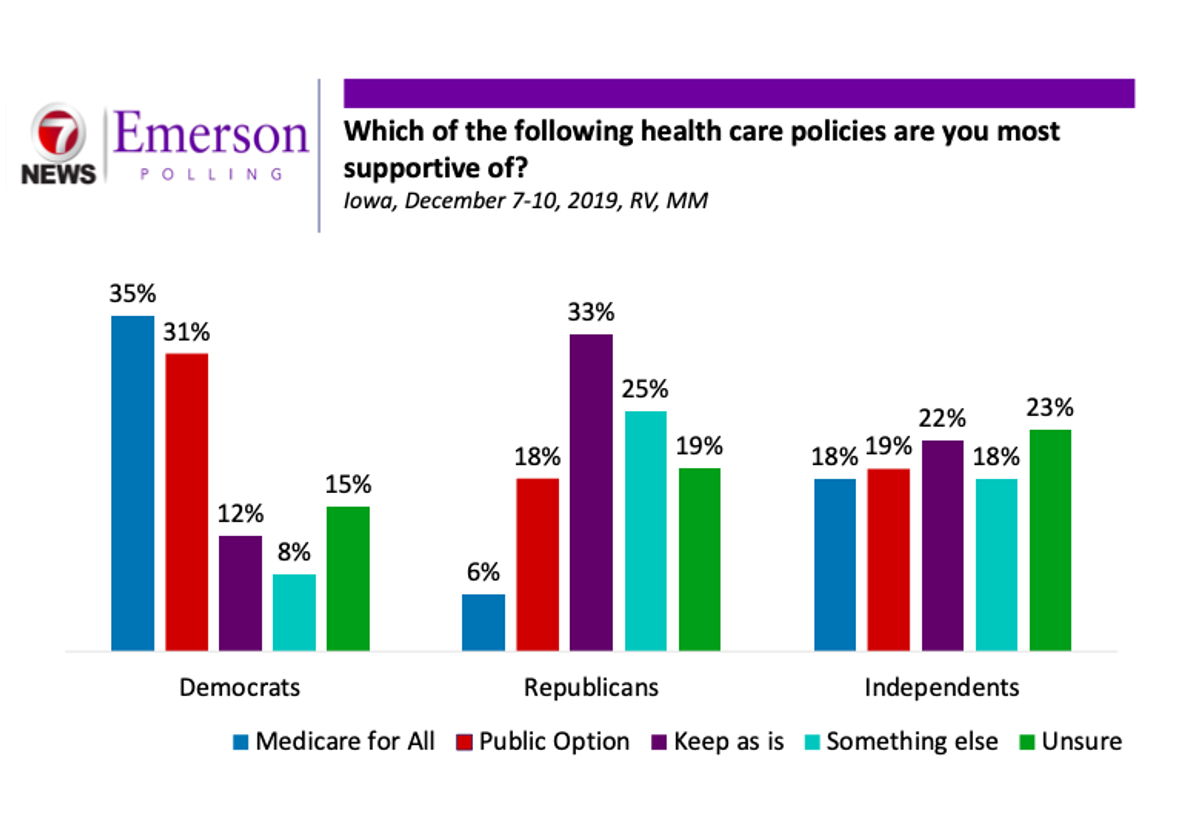 Those who have a union member in their household were split on what health care policy they support: 24% respectively said they support a public option and keeping it as it is, 21% were unsure, and 19% support Medicare for All. 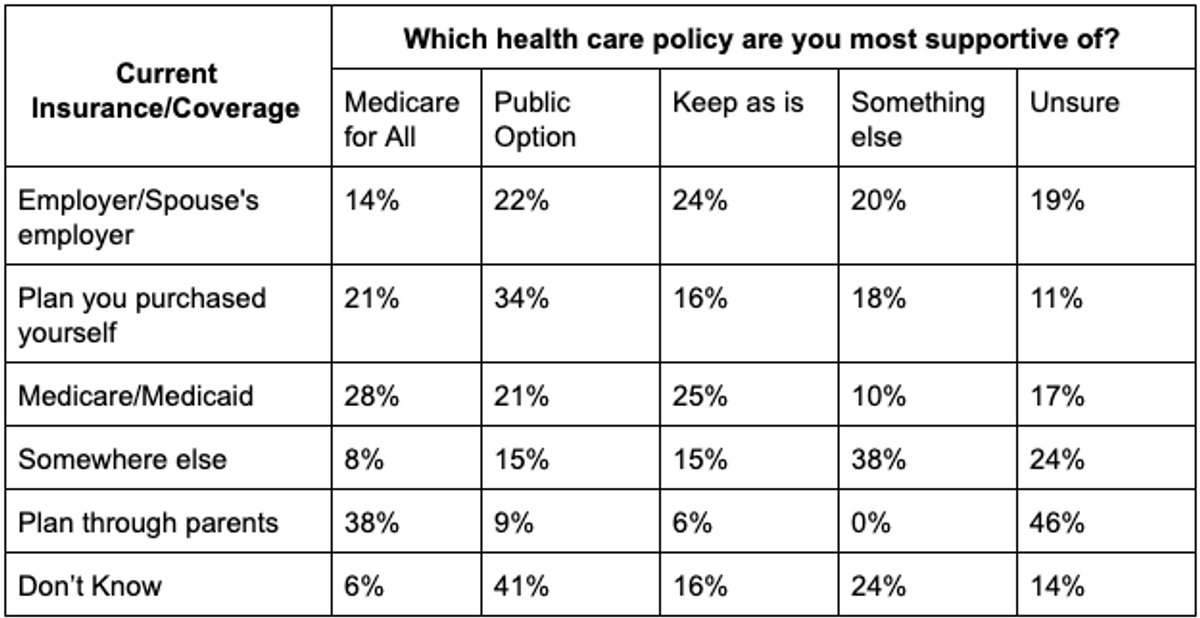 With the impeachment investigations reaching a boiling point in D.C., opposition to impeachment in the Hawkeye state sits at 50% while 38% are supportive of it. 12% of Iowans still have yet to make up their minds about the issue. Despite the recent hearings and pressure from the House Democrats, support for impeachment has dropped slightly since the last Emerson Iowa poll in mid-October when 48% opposed impeachment, 42% supported it, and 10% were unsure.

President Trump leads all potential Democratic opponents in head to head matchups in Iowa. The President leads Buttigieg by a point 46% to 45%. Against Biden, he leads 49% to 45%, and against Sanders and Warren he leads 50% to 43%. This is a shift from the previous Emerson Iowa poll, in which Sanders lead Trump by a point, and Biden and Warren trailed Trump by two points.

Spencer Kimball, Director of Emerson Polling said, “one potential explanation for Trump's improvement in Iowa is the Democrats’ inability to make the impeachment issue resonate more with voters as we saw a drop in both importance and support since October”.

The Iowa Emerson College poll was conducted December 7-10, 2019. The sample consisted of registered voters, n=1,043, with a Credibility Interval (CI) similar to a poll’s margin of error (MOE) of +/- 3 percentage points. The data was weighted based on 2016 voter model of congressional district, gender, age, education, party affiliation. It is important to remember that subsets based on gender, age, party breakdown, ethnicity and region carry with them higher margins of error, as the sample size is reduced. Data was collected using both an Interactive Voice Response (IVR) system of landlines only (n=684) and an online panel provided by Dynata and MTurk (n=359). 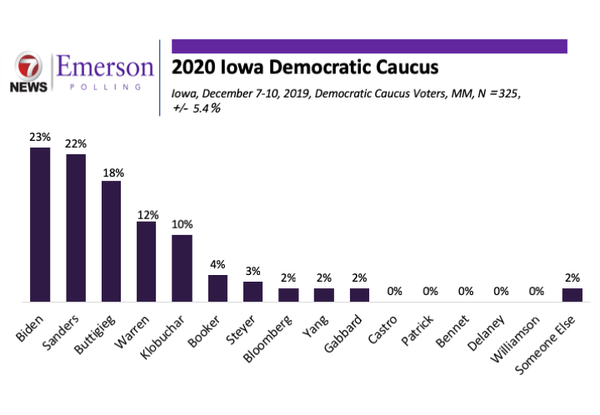 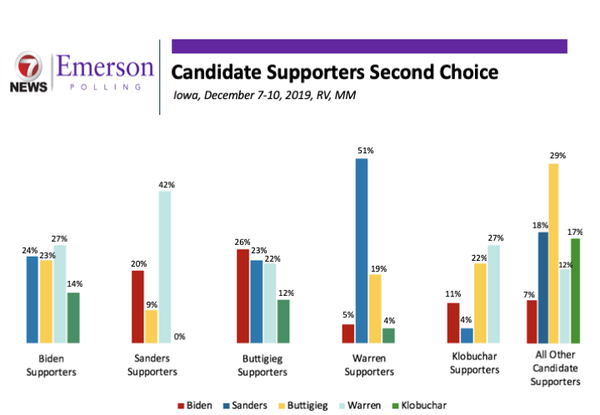 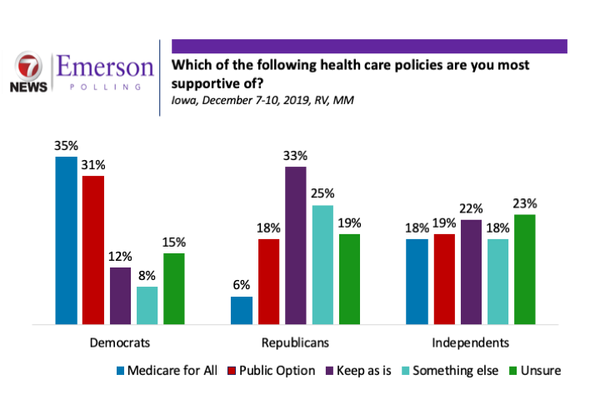 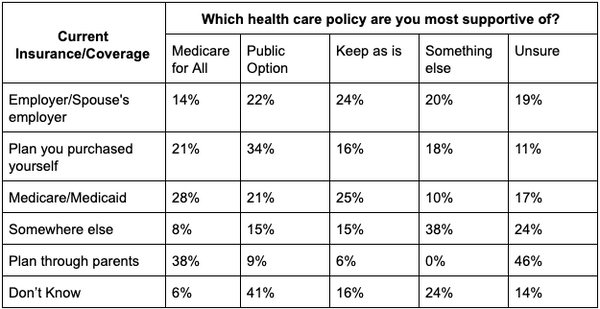