A new Emerson College/7 News Poll finds Senator Bernie Sanders leading the Iowa Democratic Caucus with 30% support, followed by former V.P. Joe Biden at 21%. Minnesota Senator Amy Klobuchar has surged to third place with 13% while Senator Elizabeth Warren and former Mayor Pete Buttigieg are the other candidates in double digits - Warren with 11% and Buttigieg with 10%. Data was collected January 23-26, mix mode, n=450, margin of error of +/- 4.6%. 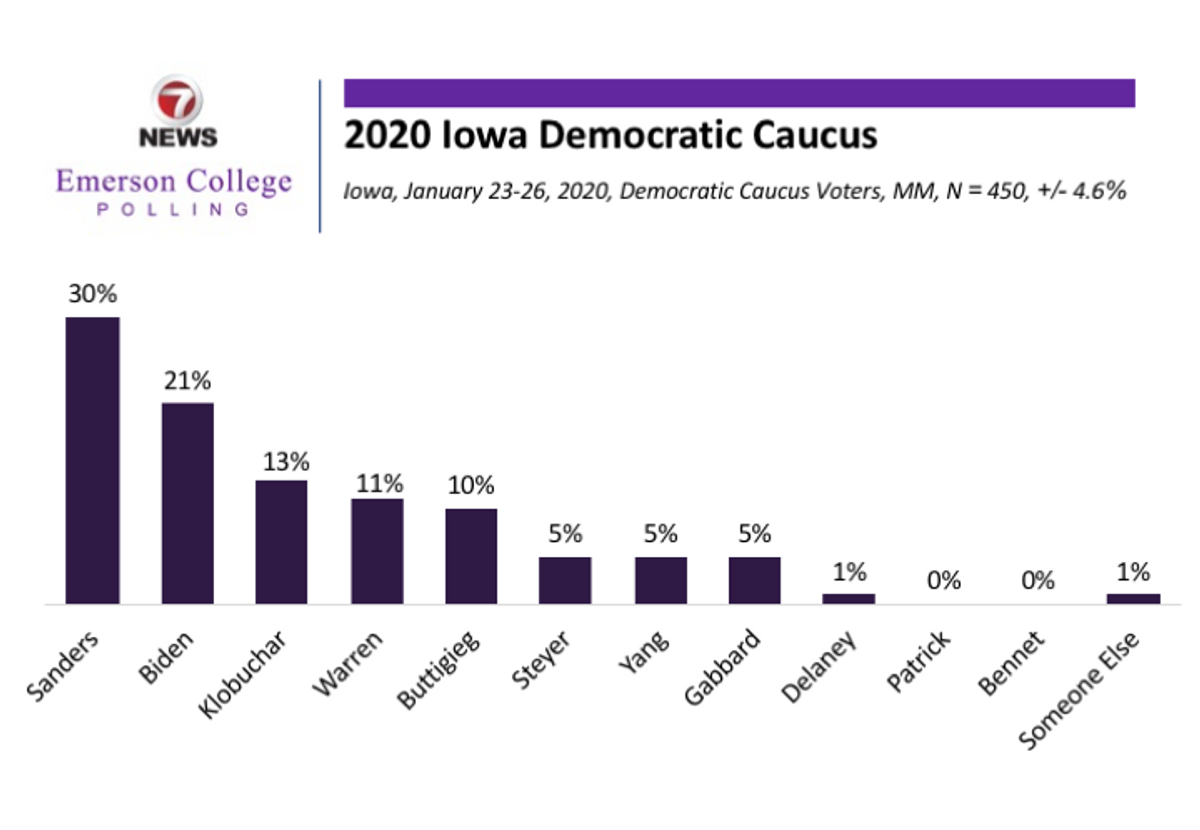 Compared to the Emerson Poll of Iowa in December, Sanders has picked up the most support, rising eight points. Biden has lost two points, Klobuchar has moved up three points, and Warren has dropped one point. Buttigieg has lost the most support, falling eight points. Yang and Gabbard have each risen by three points, and Steyer has moved up two points.

Spencer Kimball, Director of Emerson College Polling, points out that “currently, only two candidates are above the 15 percent threshold. This means that at the caucus, the second and third-tier candidate supporters will have an impact on the eventual winner, even if the winner is not their first choice.”

However, Kimball cautions that “there is still over a week until the Caucus and as we saw in 2016 with Trump ahead a week out but losing the final vote to Cruz, that is enough time to see significant changes in the race.”

Over the past year, Biden has witnessed a slow downward trajectory in the Emerson Polls of Iowa voters, and this is the first time the former VP has not been in the lead. Klobuchar has gained the most in support in the last two polls. Sanders is the only candidate to hit 30% in any Emerson poll of Iowa during the past year. 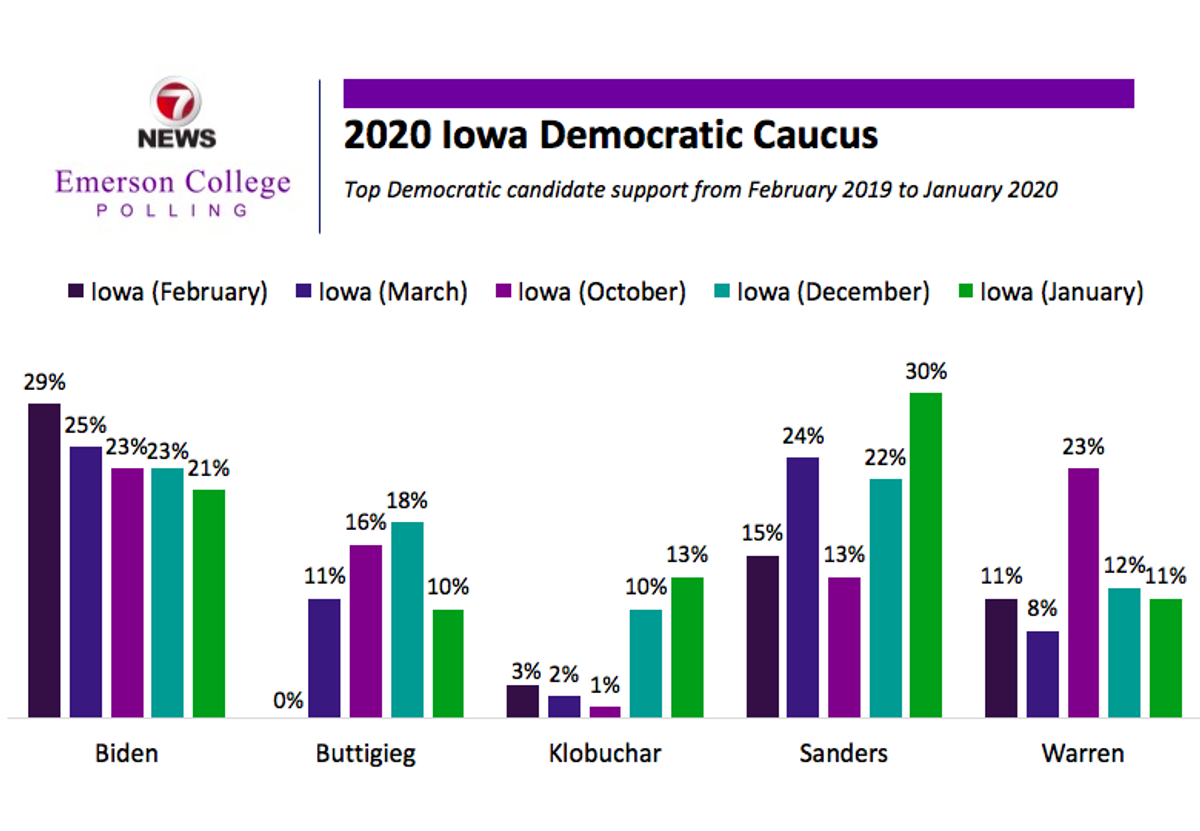 Spencer Kimball, Director of Emerson College Polling, said “younger voters have coalesced around Sanders, but older voters seem to be having cold feet on Mayor Pete and are taking a serious look at Amy Klobuchar. This is Pete’s lowest level of support since he surged onto the Iowa stage in March.”

Sanders also holds a strong lead with “very liberal” voters, as he garners 46% support in this group. Warren follows at 17%, Buttigieg at 14%, and Biden at 8%. Among “somewhat liberal voters”, Sanders also leads with 36%, with Biden at 19%, Klobuchar 15%, and Warren 13%. Among “moderate” or “conservative” voters, Biden leads with 29%, followed by Sanders and Klobuchar with 15%, and Buttigieg with 12%.

Iowa voters are finalizing their caucus decision, with 62% saying they will definitely vote for their candidate, whereas 38% indicate there is still a chance they could change their mind and vote for someone else. Sanders supporters are the most committed to their candidate, with 69% followed by 68% of Biden and Warren supporters, and 63% of Buttigieg supporters. In contrast, 43% of Klobuchar supporters said that they will definitely support the Minnesota Senator as their first-choice candidate.

When Iowa voters were asked about which candidate had the best healthcare policy, 35% said Bernie Sanders followed by Biden with 21%, Warren with 14%, Buttigieg with 13%, Klobuchar at 9% and someone else at 8%. 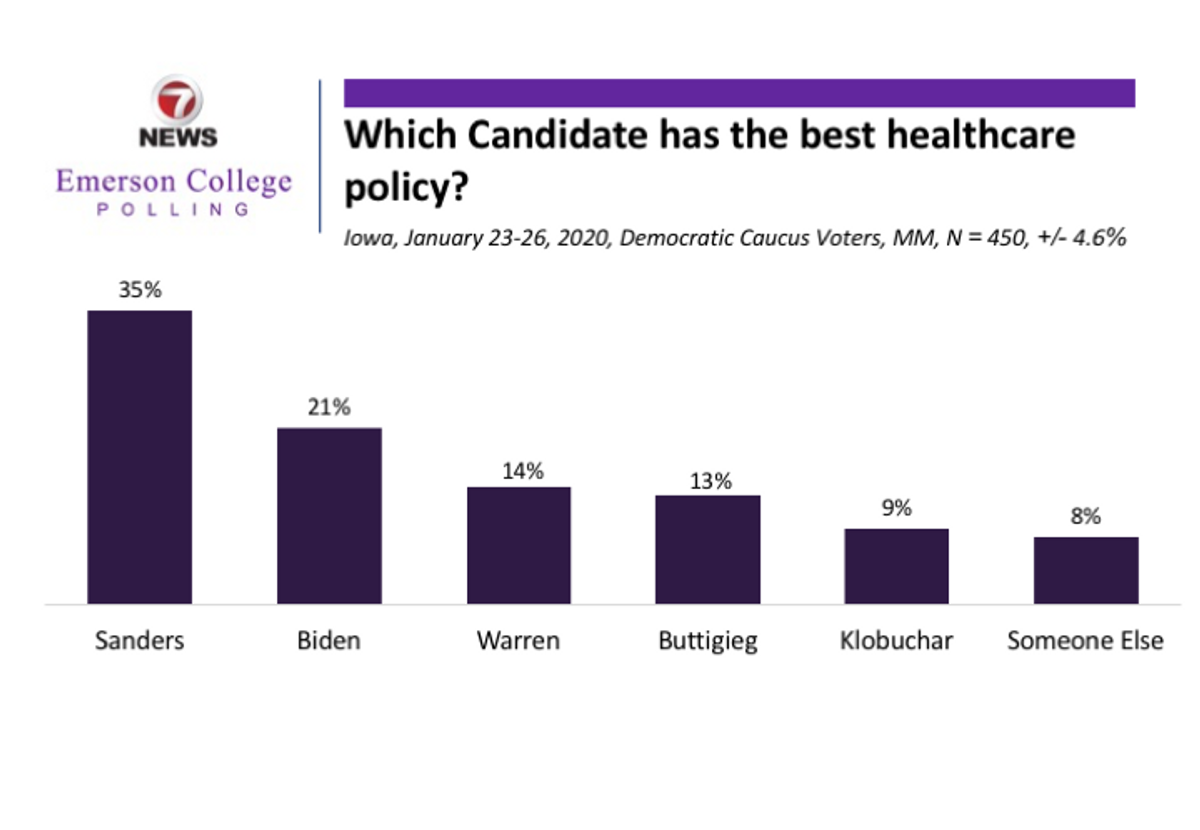 A strong majority, 75%, of Iowa voters said that they will vote for the Democratic nominee in November, even if their preferred candidate does not earn the nomination. Only 3% said that they would not support the nominee, and 21% said that it depends on who is the eventual nominee is. 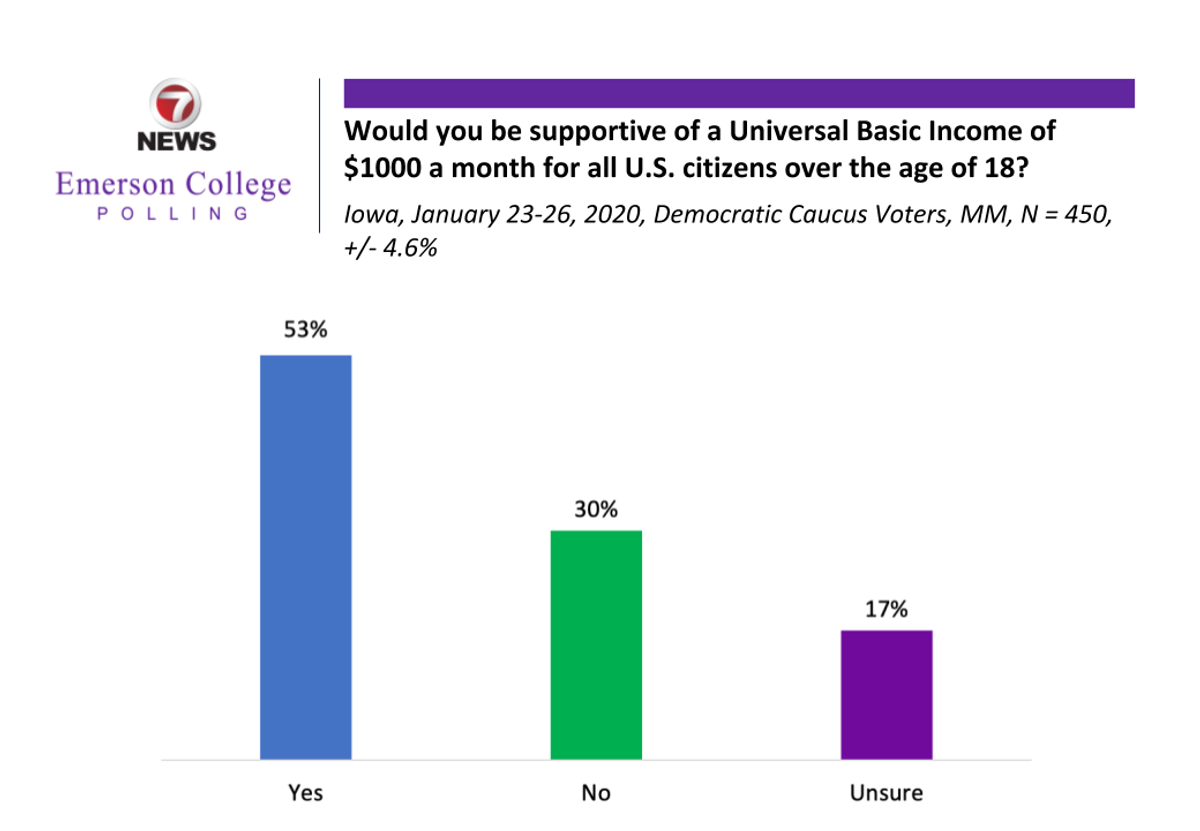 Voters are fairly split on supporting a candidate who advocates decriminalizing illegal border crossings. 36% favor decriminalization as compared to 28% who oppose, and 36% who are unsure. Sanders and Warren's supporters have a higher level of support for this policy: Sanders’ supporters at 45%, and Warren’s supporters at 40%. Much lower levels of support were seen in Biden voters, who said yes at 28%, no at 22%, and 49% were largely unsure.

Iowa Democratic caucus voters were asked if the Senate should vote to remove President Trump from office. A strong majority, 79%, think Trump should be removed, 13% think he should not, and 8% were unsure.

Fifty-five percent (55%) of Iowa Democratic Caucus goers were unsure of their position on the new US-Mexico-Canada Agreement (USMCA) that replaces the current North American Free Trade Agreement (NAFTA). Twenty-eight percent (28%) support the USMCA, and 17% said they oppose it.

The Iowa Emerson College poll was conducted January 23-26, 2020. The sample consisted of registered Democratic and Independent voters, n=450, with a Credibility Interval (CI) similar to a poll’s margin of error (MOE) of +/- 4.6 percentage points. The data was weighted based on gender, age, education, region, and based on 2016 turnout model. It is important to remember that subsets based on gender, age, party breakdown, ethnicity and region carry with them higher margins of error, as the sample size is reduced. Data was collected using both an Interactive Voice Response (IVR) system of landlines only (n=218) and an online panel provided by Dynata and MTurk (n=232). 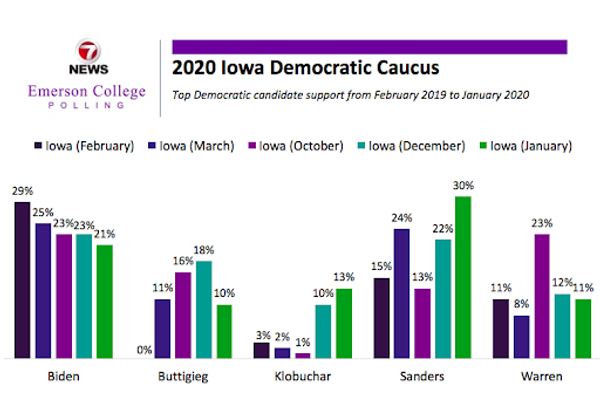 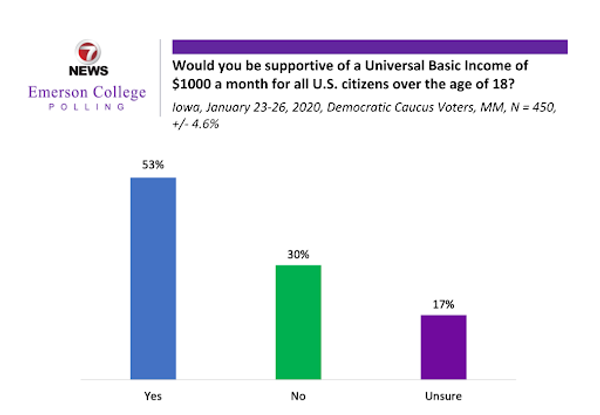 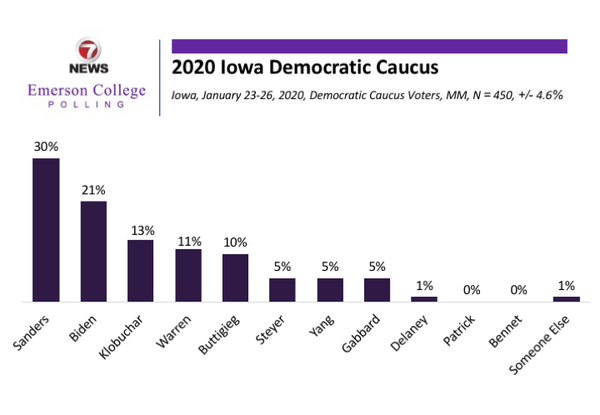 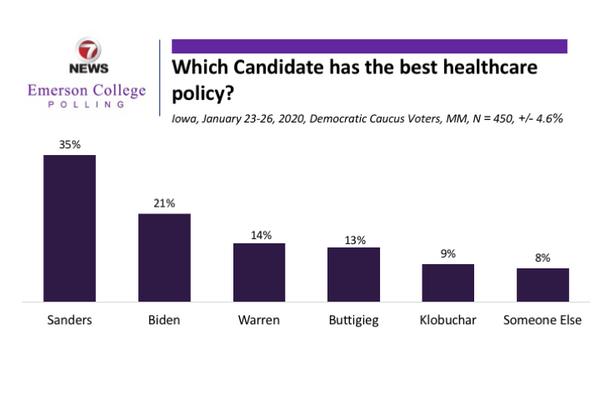