The final Emerson College/7 News Iowa poll finds Senator Bernie Sanders with a solid lead going into Monday’s caucus with 28% support. Former Vice President Joe Biden follows with 21%, former South Bend Mayor Pete Buttigieg is at 15%, Senator Elizabeth Warren is at 14%, and Senator Amy Klobuchar is the only other candidate in double digits with 11%. Data was collected from January 30 - February 2, 2020, mixed-mode, n=853, margin of error of +/- 3.3%. 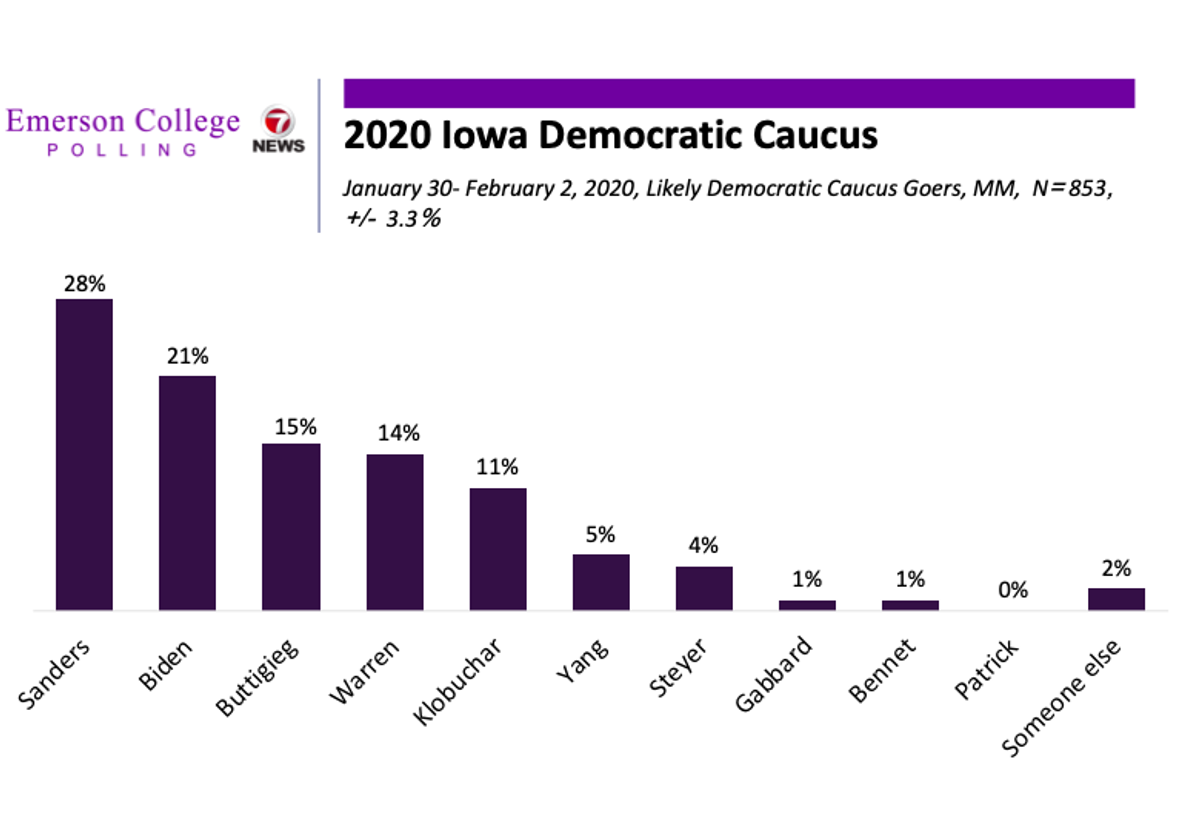 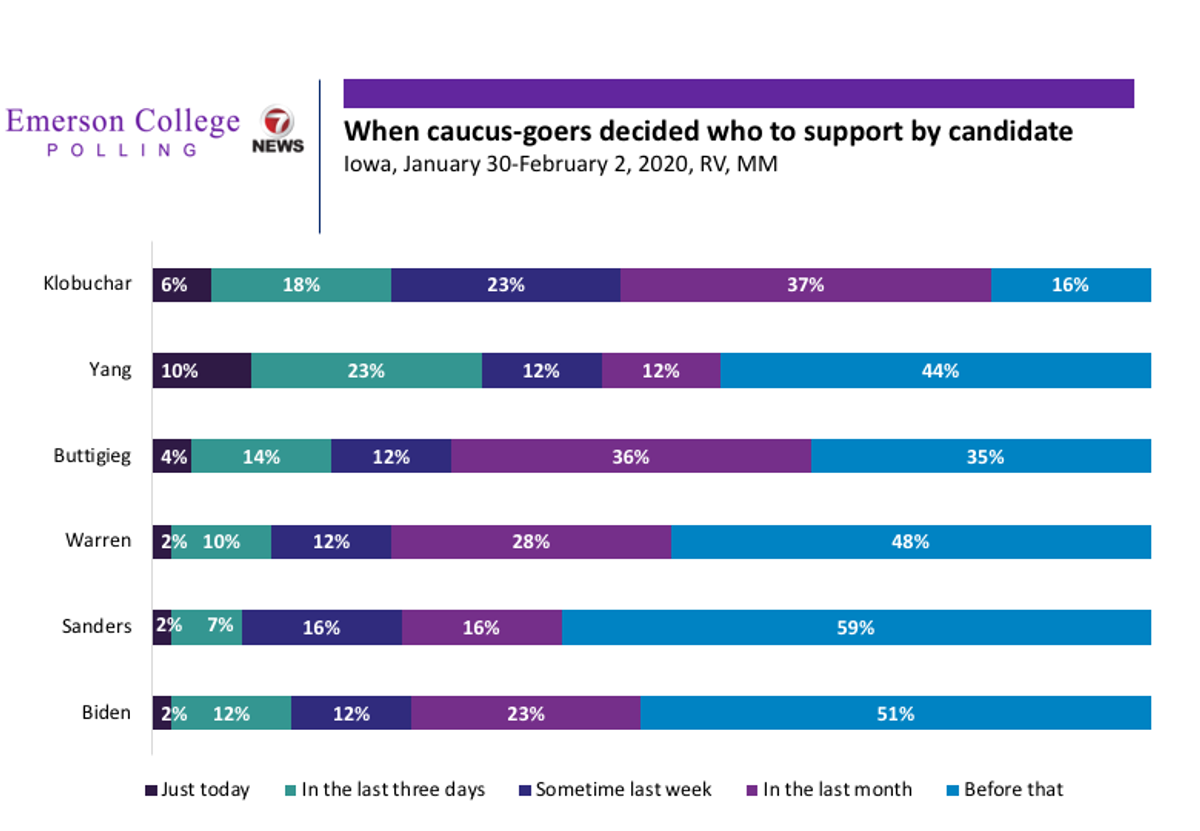 The key to Sanders's lead is his overwhelming support among young voters, as he garners 45% support among 18-49-year-olds. Following Sanders is Buttigieg and Warren with 15% and 14% respectively, and Biden with 7%. Among voters 50 and over, Biden leads with 33% support, followed by Klobuchar at 18%, Buttigieg at 14%, Warren at 13% and Sanders at 12%. 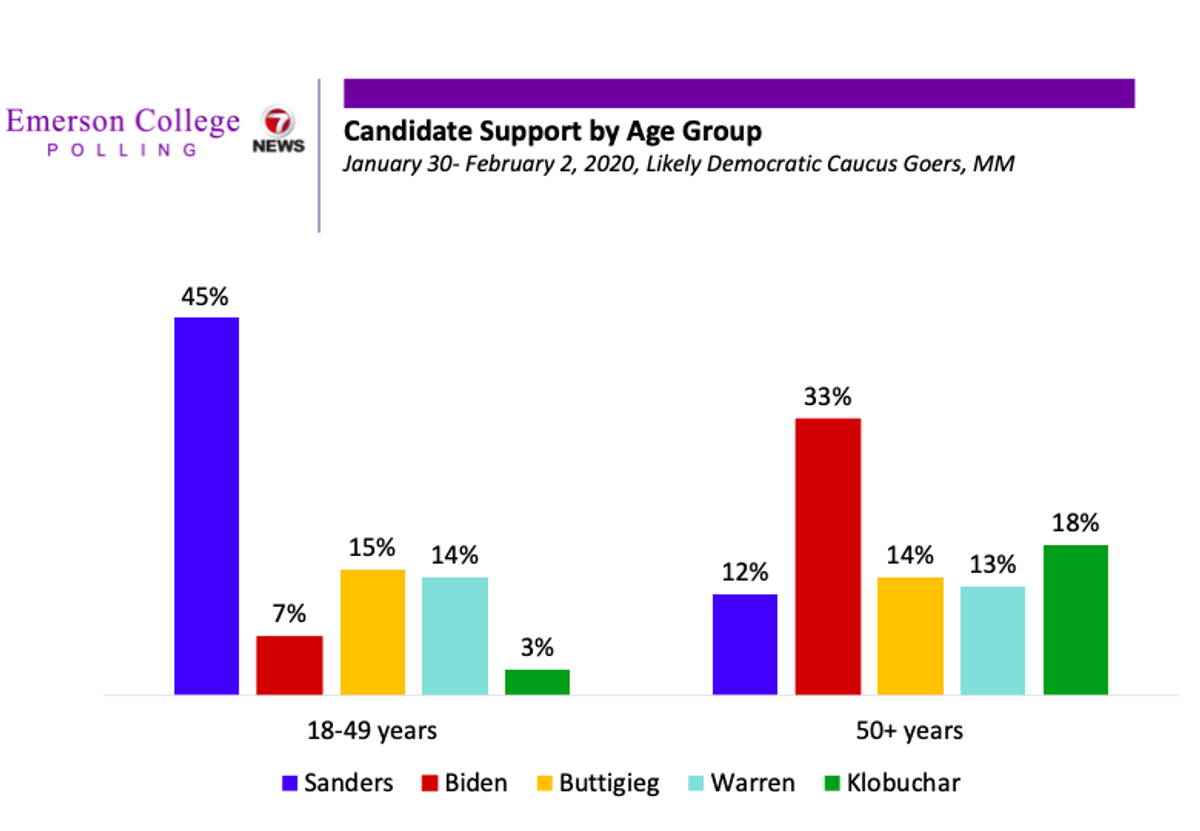 Another factor in Sanders’ lead is his strength among “very liberal” voters. He leads that group with 46%, followed by Warren at 21% and Biden at 12%. Sanders has a smaller lead among “somewhat liberal” voters with 25%, compared to Biden at 20%, Buttigieg at 19% and Warren at 17%. Biden holds a lead among “moderate” and “conservative” voters with 28% support, following him is Sanders at 18%, Buttigieg at 15% and Klobuchar at 13%.

Research Assistant Brendan Kane notes that “an important thing for Sanders’ campaign is how Warren’s support varies across the state. Sanders is the second choice of nearly half of Warren supporters, and she is right on the edge of the 15% viability threshold in the first, second and third congressional districts, compared to the fourth district where she is at just 6%.”

The most important issue among those polled is health care at 32%, followed by social issues and the environment with 17%, the economy with 14%, and impeachment with 7%.

Sanders was seen as the candidate with the best environmental policy by 32% of respondents, followed by Warren at 16%, Biden at 13%, and Buttigieg at 11%.

The Iowa Emerson College poll was conducted January 30-February 2, 2020. The sample consisted of registered Democratic and Independent voters, n=853, with a Credibility Interval (CI) similar to a poll’s margin of error (MOE) of +/- 3.3 percentage points. The data was weighted based on gender, age, education, region, and based on 2016 turnout model. It is important to remember that subsets based on gender, age, party breakdown, ethnicity and region carry with them higher margins of error, as the sample size is reduced. Data was collected using an Interactive Voice Response (IVR) system of landlines only (n=288), online panels provided by Dynata and MTurk (n=310), and cell phone (n=255) only responses via opt-in text message. 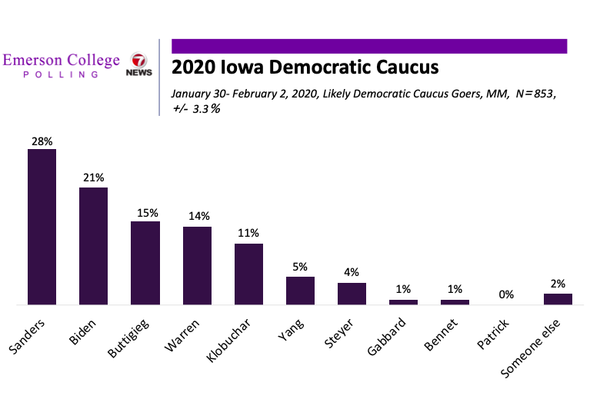 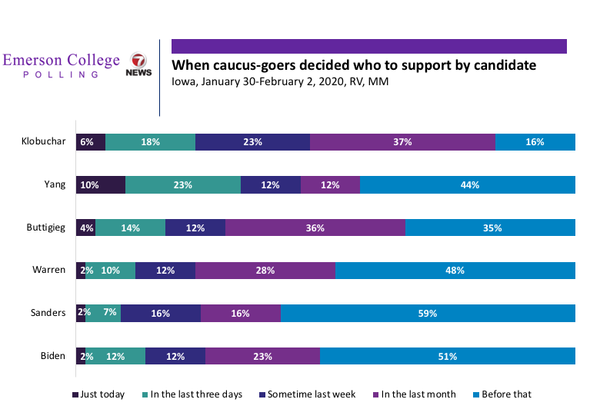 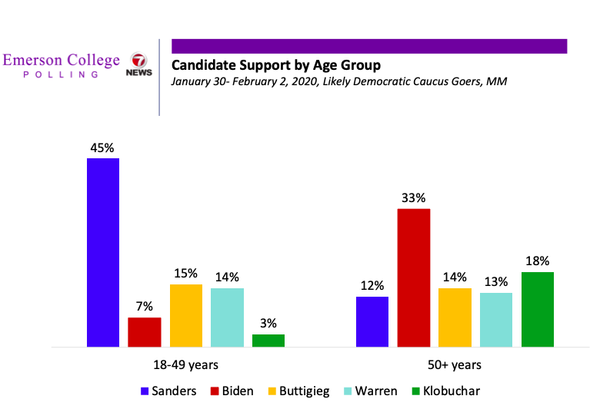