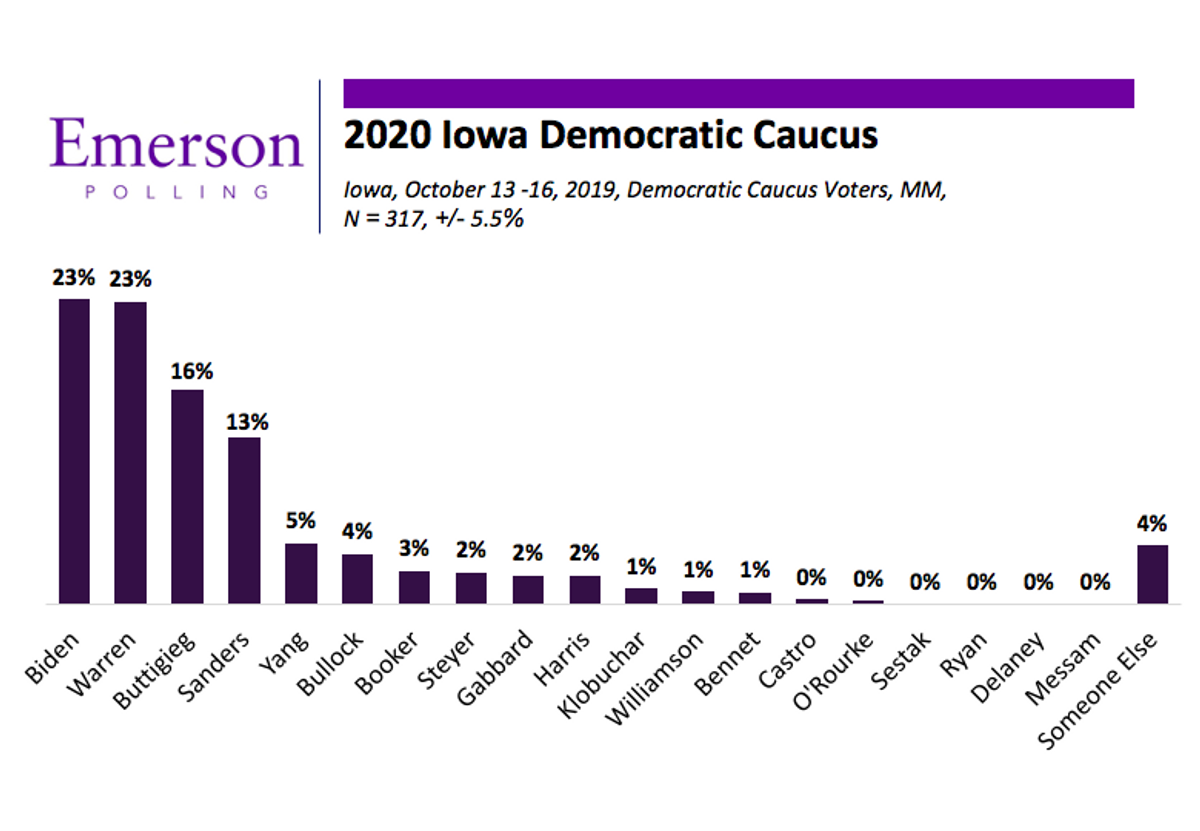 According to Spencer Kimball, Director of Emerson Polling, “The good news for Biden is he did not lose much ground since March’s poll that had him at 25% of the vote. It appears that Warren has been the beneficiary of Sanders’s drop from 24% to 13%; Mayor Pete appears to have solidified his base in Iowa, going from 0% in February, to 11% in March, and now 16% in the Hawkeye state.”

Warren has also overtaken Sanders among voters under the age of 50. 21% of those under 50 support Warren followed by Sanders at 18%. Biden continues to lead with those over 50 - receiving  33% support from this cohort, followed by Warren at 24%. 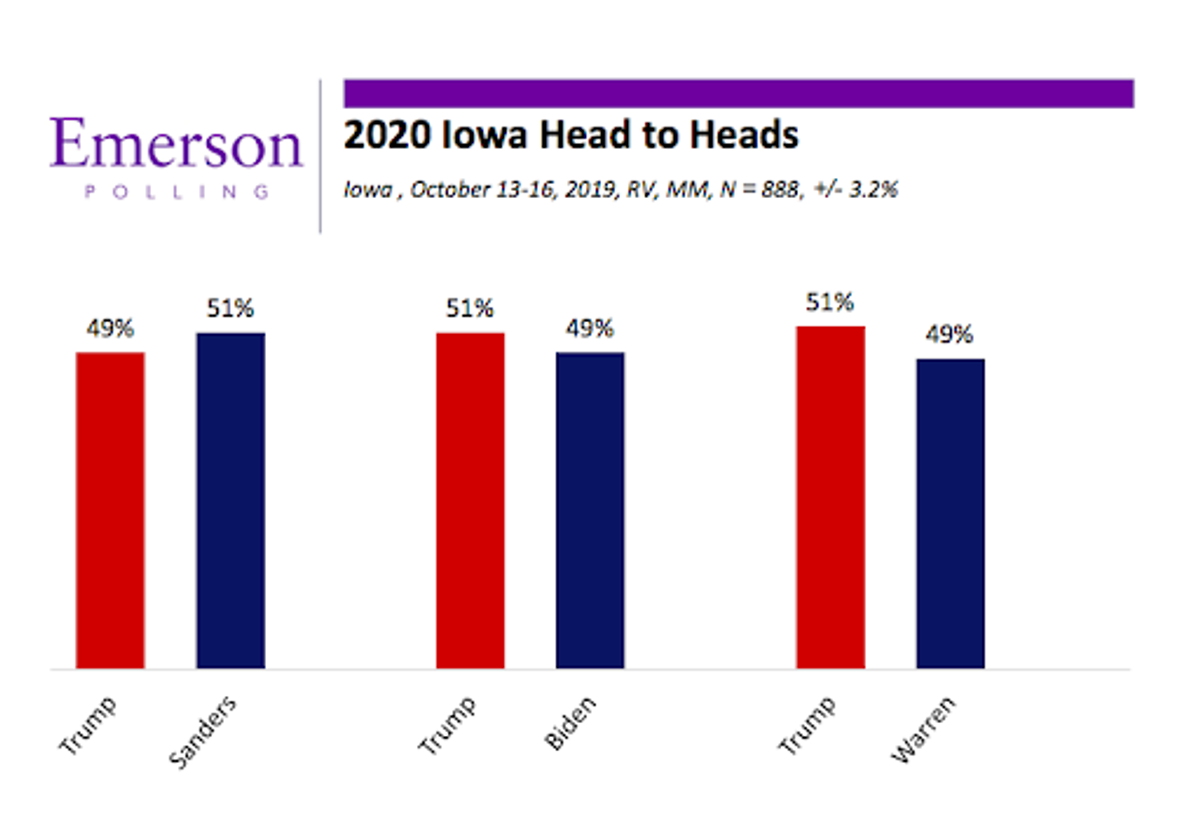 “The Democrats have some work to do in Iowa convincing voters that impeachment is a top priority of Congress;  67% of Democrats in Iowa support impeaching the president, but only 10% identify it as the most important issue in deciding their vote for president,” added Kimball.

One in four voters (25%) said they have seen a presidential candidate in person, and, as expected, Democratic primary voters were more likely to have seen a candidate at 34%.

It is important for Iowans to be the first state in the Presidential nomination process to vote, 69% said it was important, while 31% said it was not important. There was no significant difference based on party affiliation and attitude toward the historic first in the nation caucus.

The Democratic Primary for US Senate is wide open with no clear frontrunner  - 74% of Democratic primary voters are still undecided. Theresa Greenfield is at 11%, Michael Franken and Eddie Mauro are both tied at 6% while Kimberly Graham is at 4%.

In a potential head to head matchup against Sen. Joni Ernst, Greenfield trails 47% to 40% with 14% undecided.

The Iowa Emerson College poll was conducted October 13-16, 2019 under the Supervision of Emerson Polling Director and Assistant Professor Spencer Kimball. The sample consisted of registered voters, n=888, with a Credibility Interval (CI) similar to a poll’s margin of error (MOE) of +/- 3.2 percentage points. The data was weighted by gender, age, education, region and mode based on 2016 turnout modeling. It is important to remember that subsets based on gender, age, party breakdown, ethnicity and region carry with them higher margins of error, as the sample size is reduced. Data was collected using both an Interactive Voice Response (IVR) system of landlines only (n=571) and an online panel provided by Amazon Turk and Dynata (n=317). 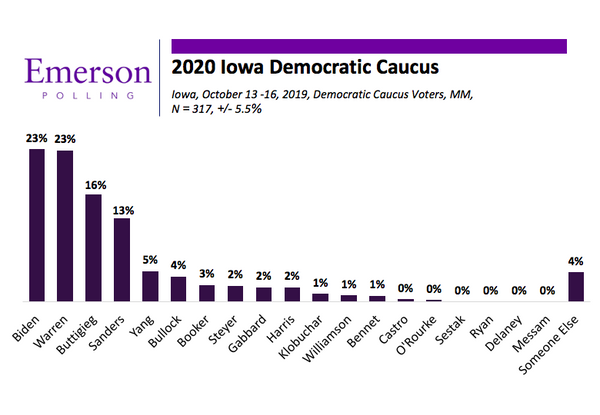 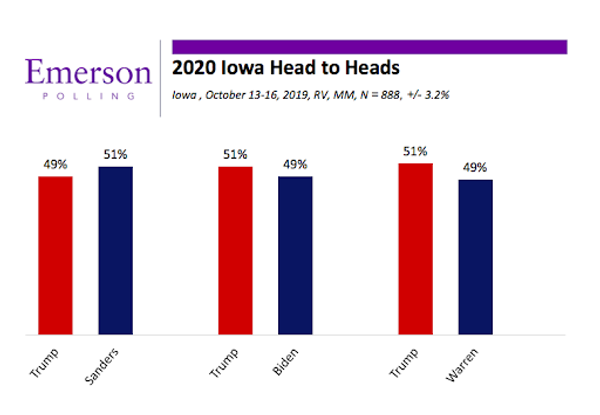