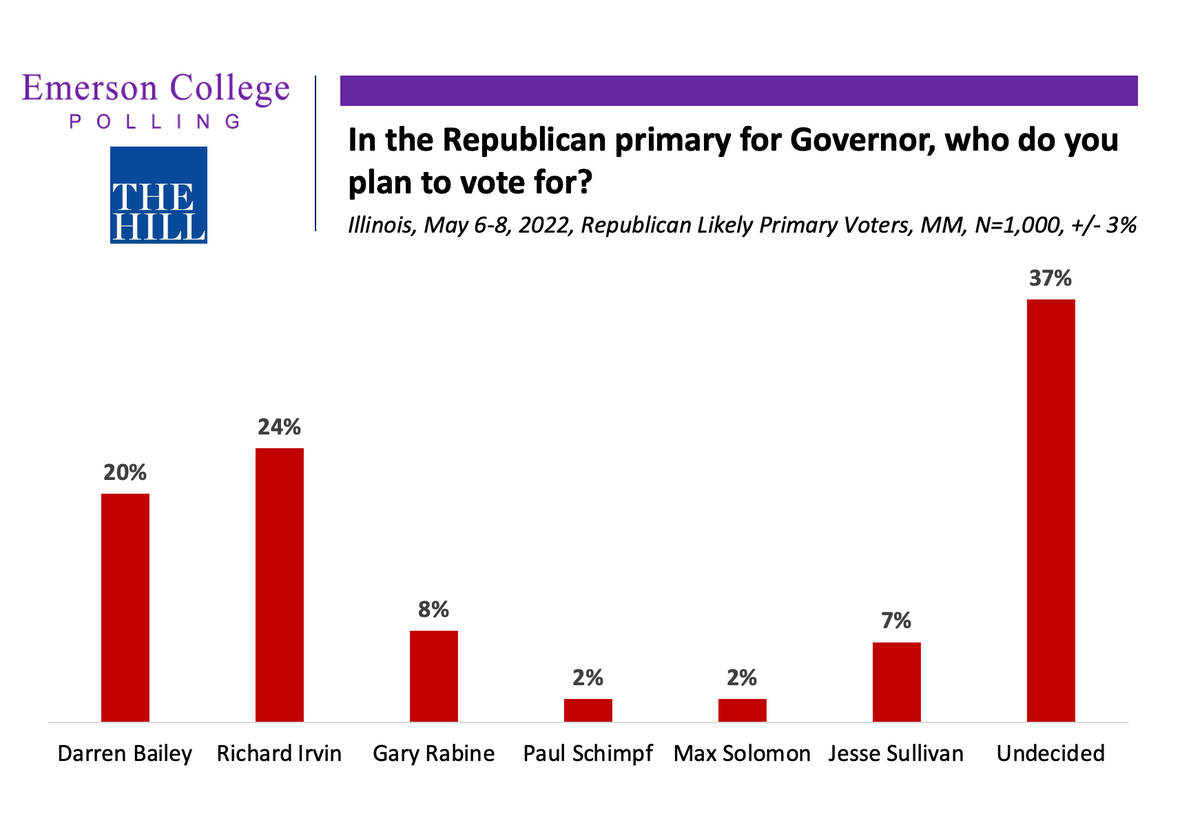 ﻿Spencer Kimball, Executive Director of Emerson College Polling noted, “The Republican gubernatorial primary has a clear education divide: Irvin leads Bailey among those with a college or postgraduate degree 30% to 17%, while Bailey leads Irvin among those without a college degree 23% to 18%.”

Irvin holds a significant lead over Bailey in the urban and city areas of the state, 32% to 10%, whereas Bailey nearly doubles Irvin’s support in the rural areas, 30% to 16%. Suburban voters are more split: 25% support Irvin and 20% support Bailey.

A majority, 57%, of Republican primary voters say they are more likely to support a candidate if former President Donald Trump supports them.

In the race to face incumbent Senator Tammy Duckworth in November, there is no clear frontrunner in the Republican primary, a 72% majority are undecided. Candidates are all under 10%, including Peggy Hubbard at 7%, Bobby Piton at 6%, and Kathy Salvi at 5%.

Thirty percent (30%) of Republican primary voters say they think Richard Irvin is best suited to tackle crime in Illinois, while 20% say Darren Bailey, and 33% are undecided. On which candidate would best handle the economy, voters are more split: 22% trust Bailey while 21% trust Irvin; 35% are undecided.

“These sentiments are reflected in the ballot test and most important issue question,” Kimball continued, “voters who say the economy is the most important issue are split between Bailey at 28% and Irvin at 27%, whereas those who say crime is the top issue break for Irvin 29% to Bailey’s 11%.”

The Emerson College Polling Illinois poll of Republican primary voters was conducted May 6-8, 2022. The Republican primary sample consisted of somewhat and very likely voters, n=1,000, with a Credibility Interval (CI) similar to a poll’s margin of error (MOE) of +/- 3 percentage points. The data sets were weighted by gender, age, education, race, and region based on 2022 turnout modeling. It is important to remember that subsets based on gender, age, ethnicity, and region carry with them higher margins of error, as the sample size is reduced. Data was collected using a cellphone sample of SMS-to-web, an Interactive Voice Response (IVR) system of landlines, and an online panel provided by Amazon MTurk. 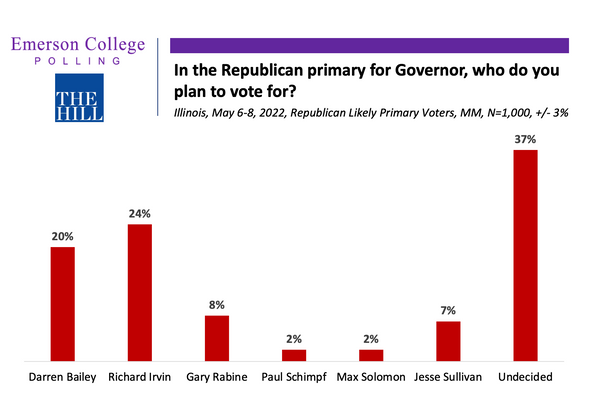