Georgia 2020: Showdown in Presidential and US Senate Races

A new Emerson College/NewsNation poll finds a statistical dead heat between President Donald Trump and former Vice-President Joe Biden, with Trump at 48% and Biden at 47% among likely voters in Georgia. Five percent (5%) of voters are voting for someone else and 1% are undecided. 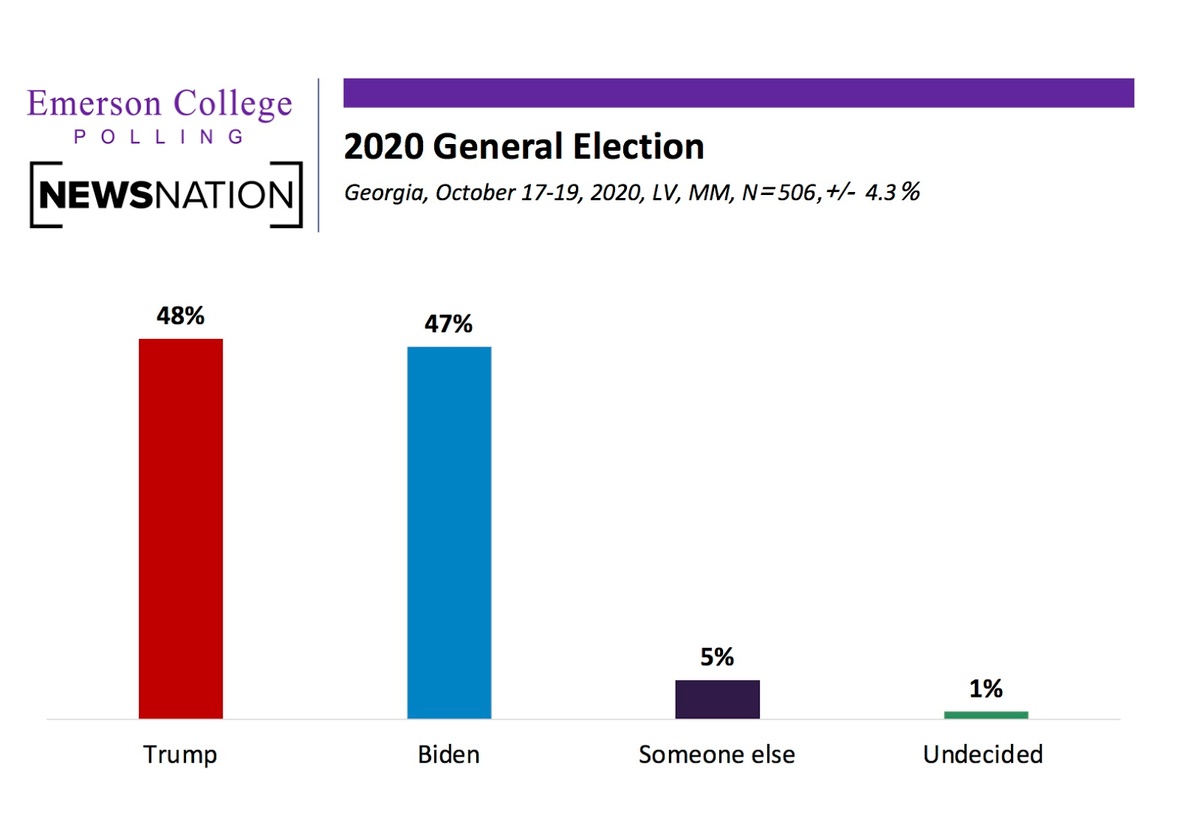 Spencer Kimball, Director of Emerson College Polling notes, “with just two weeks until the election, Trump is underperforming his 2016 numbers in Georgia, but he may benefit from competitive Senate races and generally greater enthusiasm among his voters.”

Biden’s strength in the state lies with younger voters 18-29, who break for him 55% to 38%, and with college educated voters who break for Biden at 55% as well. Trumps’ strength is with white voters where he leads 64% to 30% and with less-educated voters where he leads 52% to 42%. There is less of a gender divide in Georgia than what was seen in other states like Michigan, with males in Georgia breaking for Trump 49% to 44% while females break for Biden 49% to 47%.

Georgia voters are split on President Trump’s job performance with 49% approving and 48% disapproving.

In one of two US Senate races in Georgia, Republican Senator David Perdue is statistically tied with Democratic candidate Jon Ossoff, 46% to 45%. Three percent (3%) are voting for someone else and 6% are undecided. 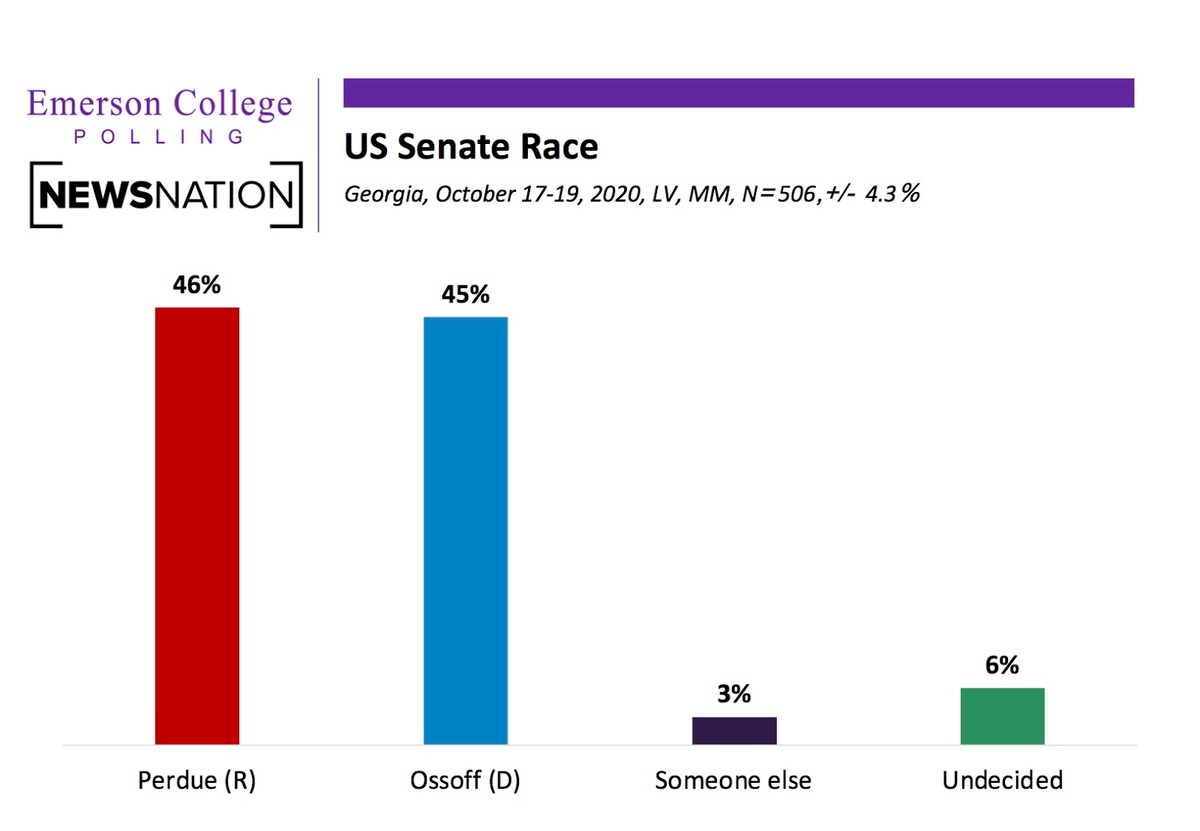 In the US Senate special election, a splintered field of 5 candidates is being led by Republican Rep. Doug Collins and Democrat Raphael Wornack, who are tied at 27% each, followed by current US Senator Kelly Loeffler, who is at 20%. If no candidate surpasses 50%, then a run off with the top two vote getters is scheduled for January 5th, 2021. 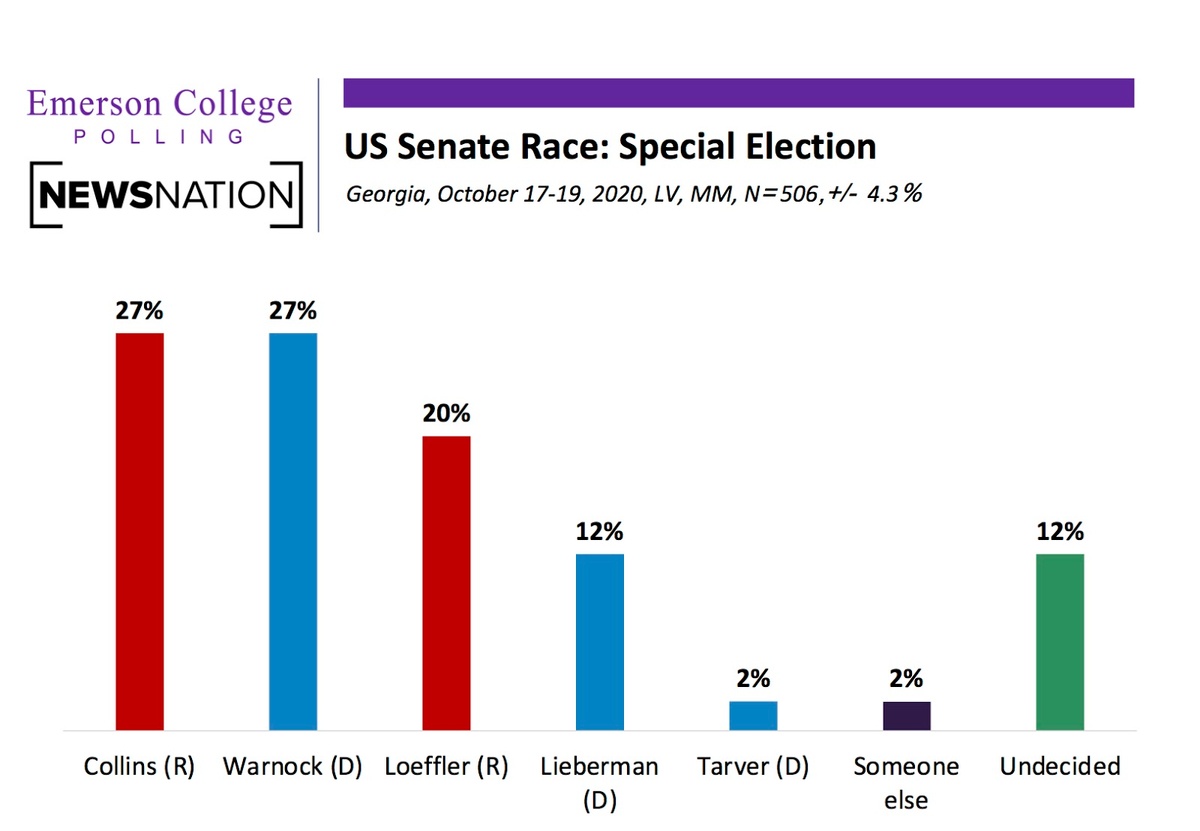 The most important issue for voters is the economy at 36%, followed by the COVID-19 response at 18%, social justice at 15%, and healthcare at 14%. Among Trump voters, 64% say the economy, while Biden voters are split between healthcare (25%), the COVID-19 response (24%), and social justice (22%) on what issue is the most important in deciding their vote.

The Georgia Emerson College poll was conducted October 17-19, 2020. The sample consisted of likely Democratic, Republican, and Independent voters, n=506, with a Credibility Interval (CI) similar to a poll’s margin of error (MOE) of +/- 4.3 percentage points. The data sets were weighted by gender, age, education, race and region based on 2016 voter turnout modeling. It is important to remember that subsets based on gender, age, party breakdown, ethnicity, and region carry with them higher margins of error, as the sample size is reduced. Data was collected using an Interactive Voice Response (IVR) system of landlines (n=186), SMS-to-web texts (n=107), and an online panel provided by MTurk (n=213).\ 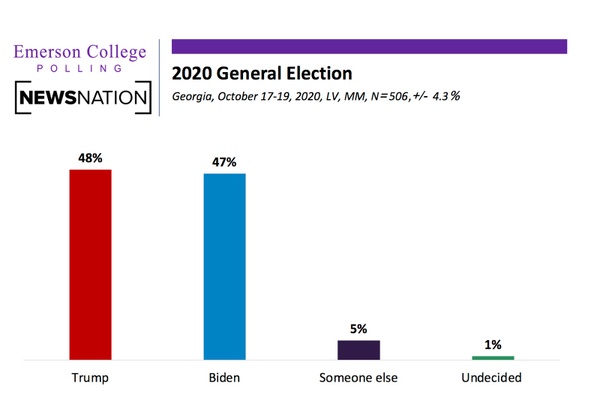 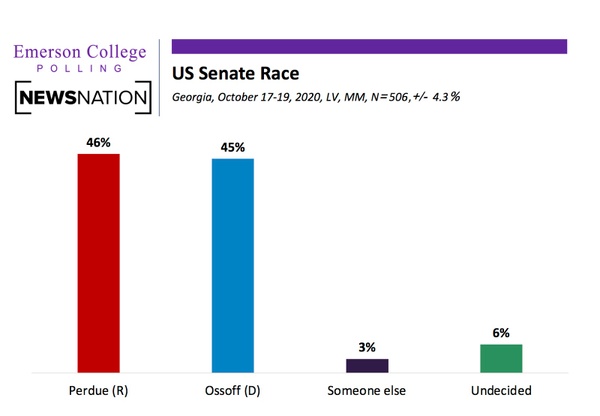 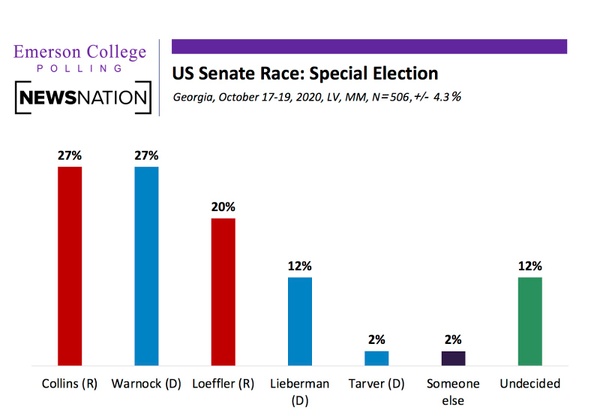