In the two US Senate run-off elections in Georgia, Republican incumbents David Perdue and Kelly Loeffler hold nearly identical 51% to 48% advantages over Democratic challengers Jon Ossoff and Raphael Warnock. The winners of these contests will determine which political party will control the U.S. Senate. 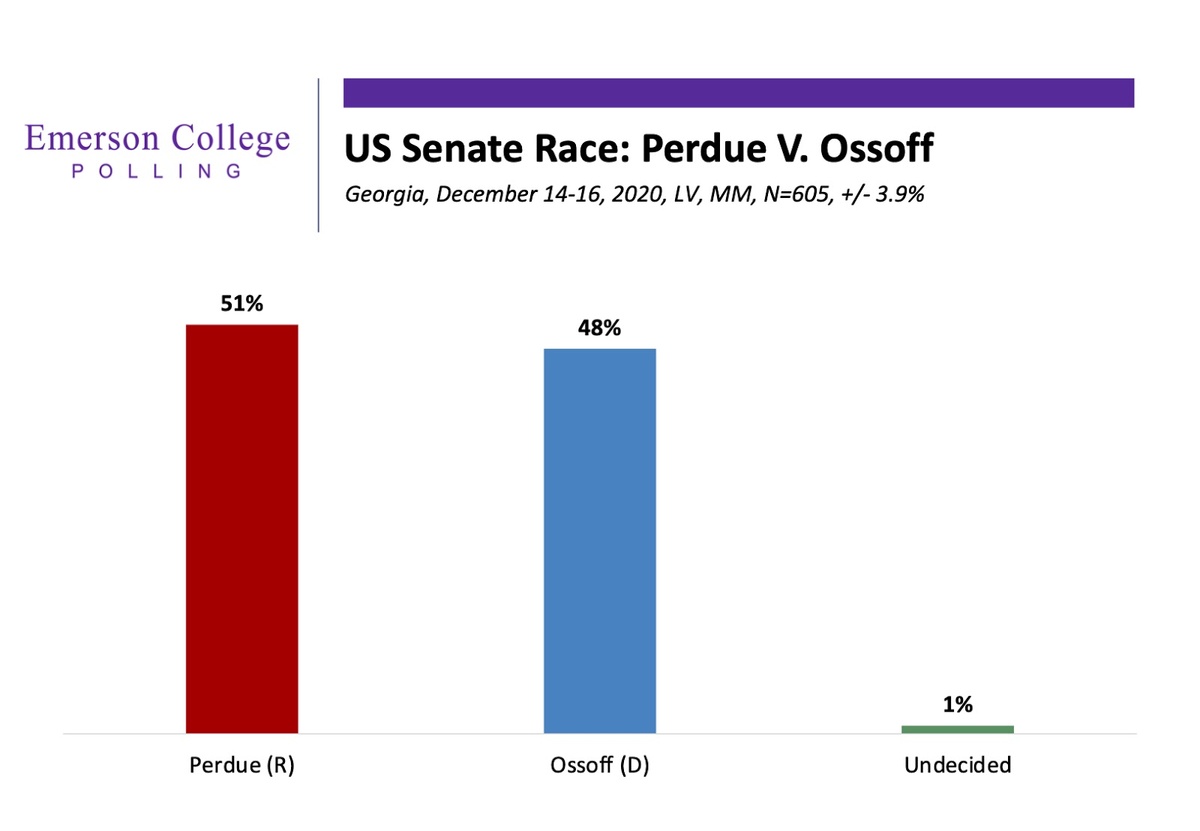 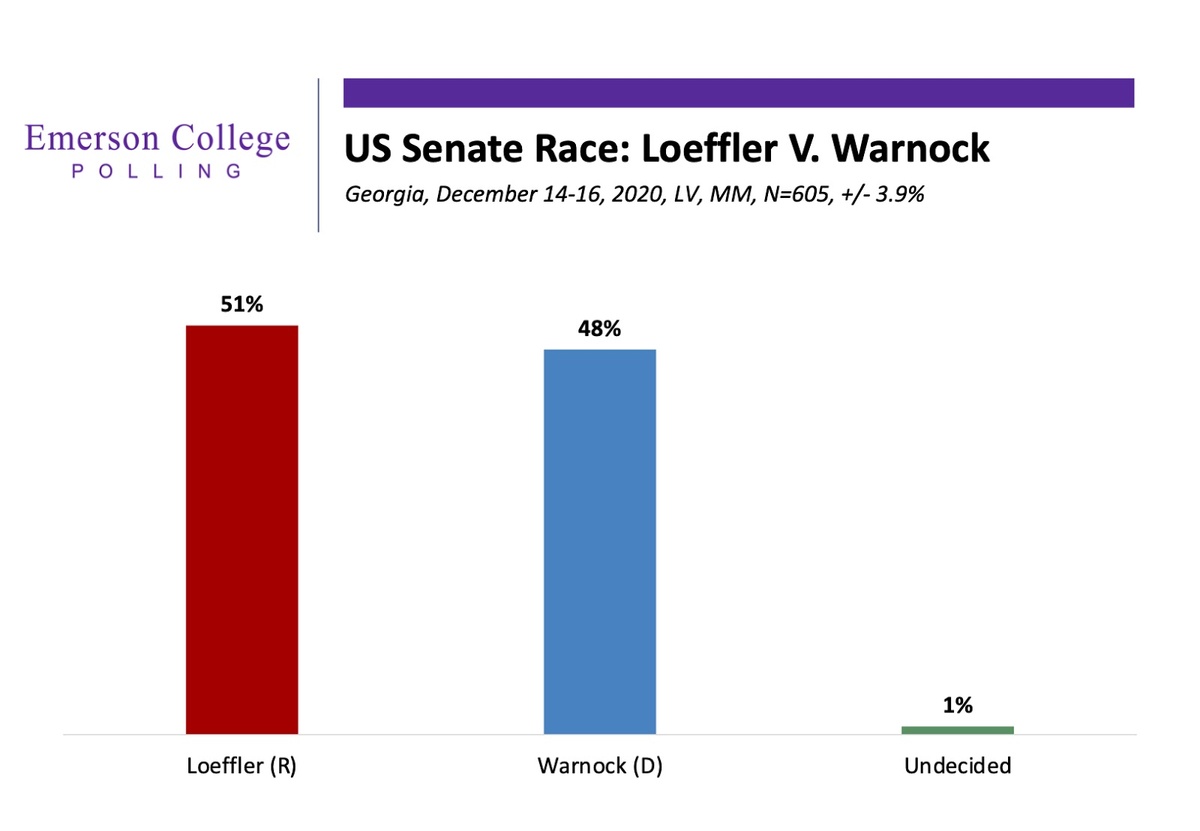 Spencer Kimball, Director of Emerson College Polling concludes that “the data revealed there is little crossover support, which suggests one party should win both seats.”

The Democratic base of support lies with 18-29-year-olds, who are breaking for Warnock with 71% of the vote, and similarly for Ossoff with 70% of the vote. The race tightens among 30-44-year-olds, as Ossoff leads Perdue 50% to 47%, and Warnock and Loeffler each receive 49% within this age cohort. Republicans gain an advantage with older voters in the Peach State, with 45-64-year-olds breaking for Perdue 57% to 42%, while also breaking for Loeffler 58% to 42%. Voters over 65 support Republican candidates by the largest margin: Perdue leads Ossoff 59% to 41% and Loeffler leads Warnock 60% to 40%. 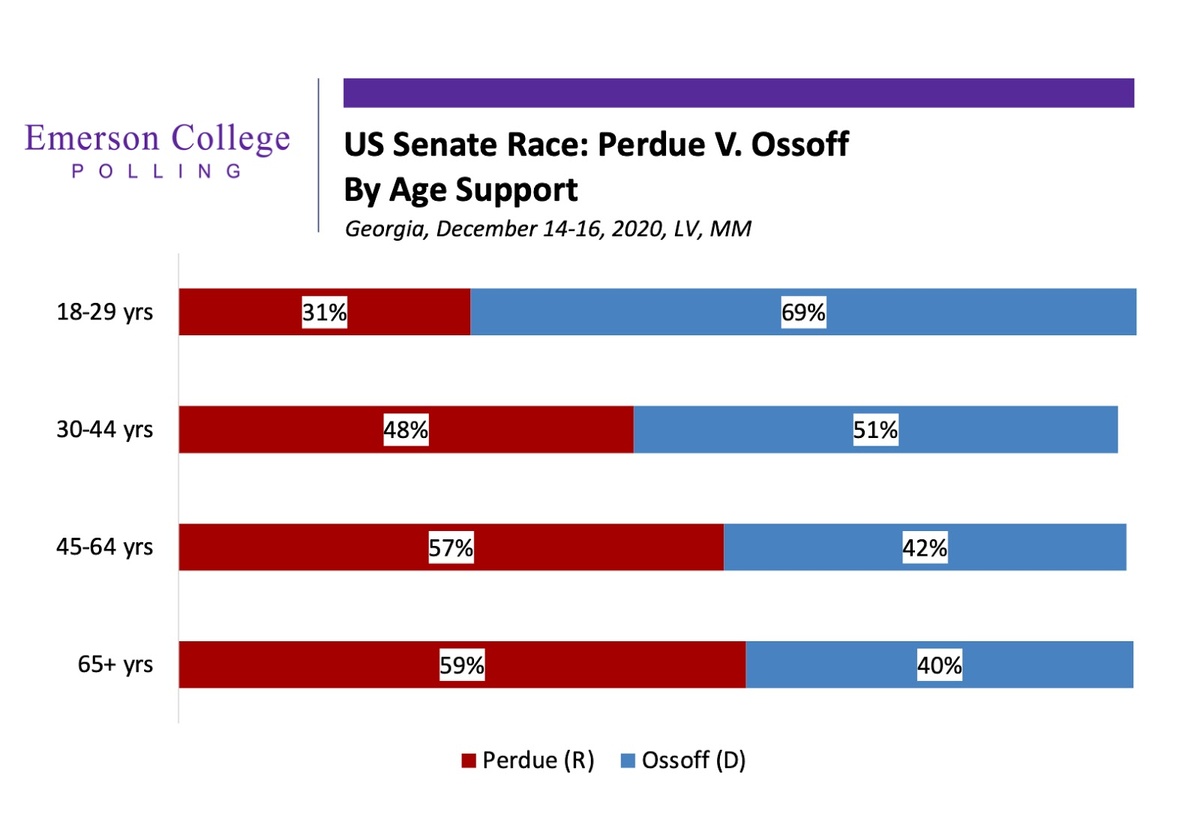 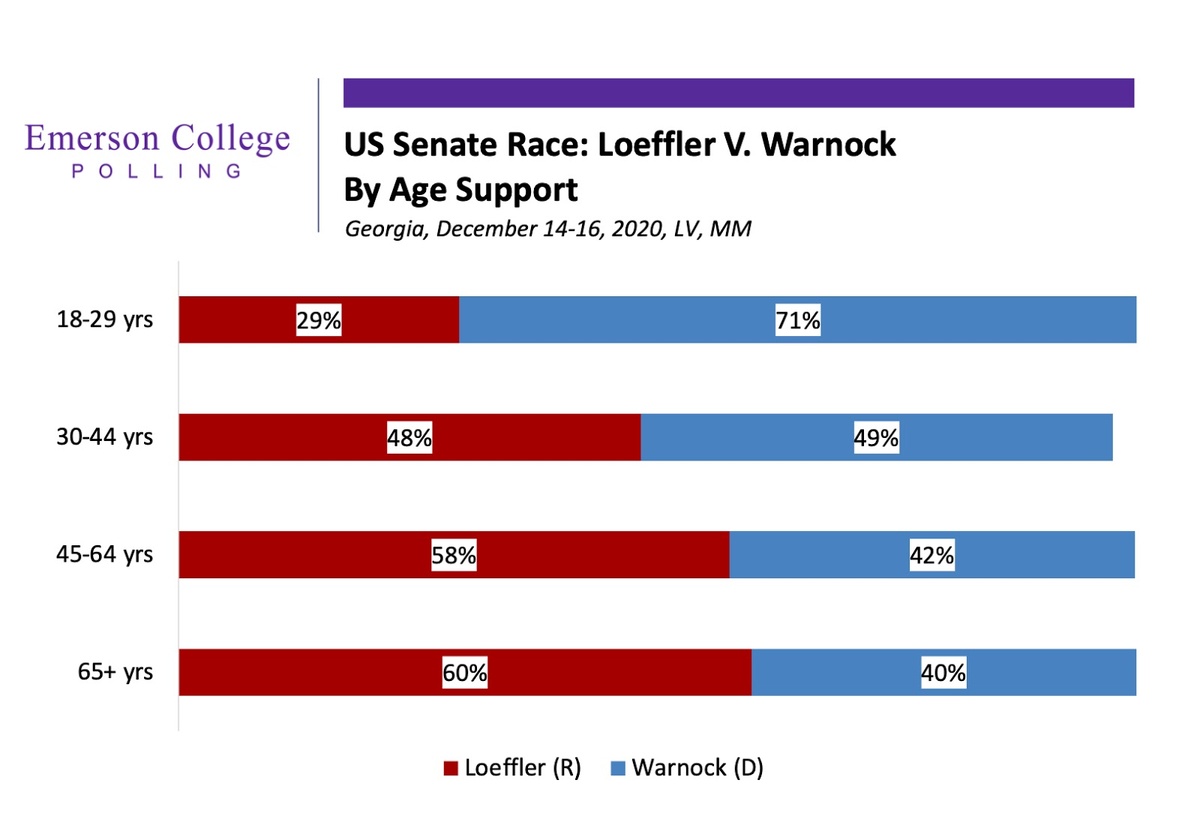 Those planning on voting early are split, with Perdue and Ossoff each receiving 49%. In the other contested election, Warnock is at 50% with Loeffler at 49%. Sixty-one percent (61%) of those who have already voted break for Ossoff and Warnock, with 39% supporting the Republican candidates. Election day voters are breaking for the Republicans, with 68% support for Perdue and 70% for Loeffler.

Perdue and Loeffler are strongest in the northern region of the state with over 75% support, and north of Atlanta with 58% support. The two Democrats have strong support in the Atlanta area, with 81% breaking for Warnock and 77% for Ossoff. Republicans lead south of Atlanta with Loeffler performing slightly better with 58% support, as compared with 57% for Perdue. Warnock and Ossoff are strong in the southwest corner of the state with 74% support for Warnock and 69% for Ossoff.

Those with some college or college degrees are split between the candidates, while the Republican candidates have a strong base with those voters having a high school degree or less - garnering 58% of the vote for Loeffler and 57% for Perdue. Those earning postgraduate degrees or higher break for the Democratic candidates, with 55% of the vote each.

The most important issues for voters are the economy (31%) and Covid-19 response (24%), followed by healthcare (15%) and social justice (12%); 9% said something else. The two Republican candidates are leading with voters who identify the economy as their top issue, each garnering 84% of that vote. However, on the next three most important issues, the Democratic candidates lead among those who said COVID-19 response (Ossoff 69% support, Warnock 67%); healthcare (Ossoff 60% support, Warnock 63%) and social justice (Warnock 79% support, Ossoff 77%).

The Georgia Emerson College poll was conducted December 14-16, 2020. The sample consisted of likely Democratic, Republican, and Independent voters, n=605, with a Credibility Interval (CI) similar to a poll’s margin of error (MOE) of +/-3.9%. The datasets were weighted by gender, age, race, education, and region based on 2020 voter turnout modeling. It is important to remember that subsets based on gender, age, party breakdown, ethnicity, and region carry with them higher margins of error, as the sample size is reduced. Data was collected using an Interactive Voice Response (IVR) system of landlines (n=321) and an online panel provided by MTurk (n=284). 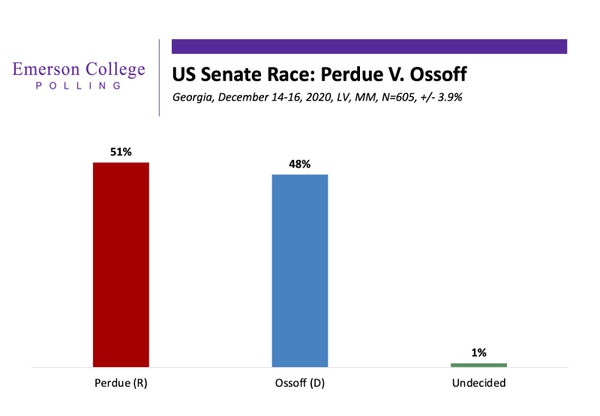 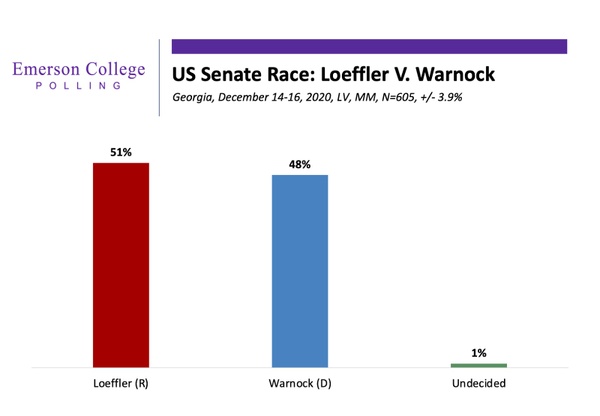 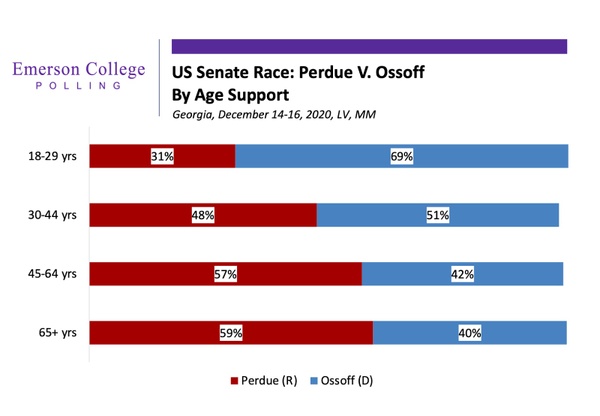 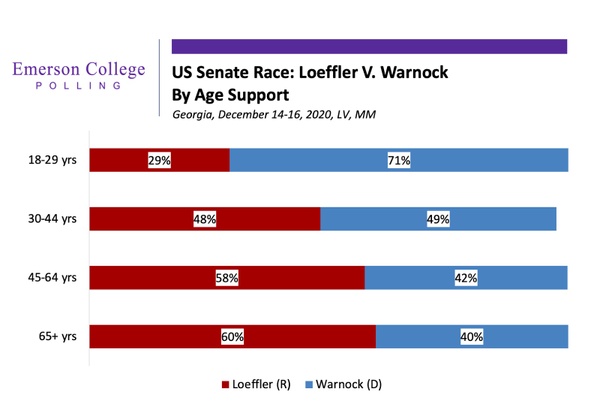