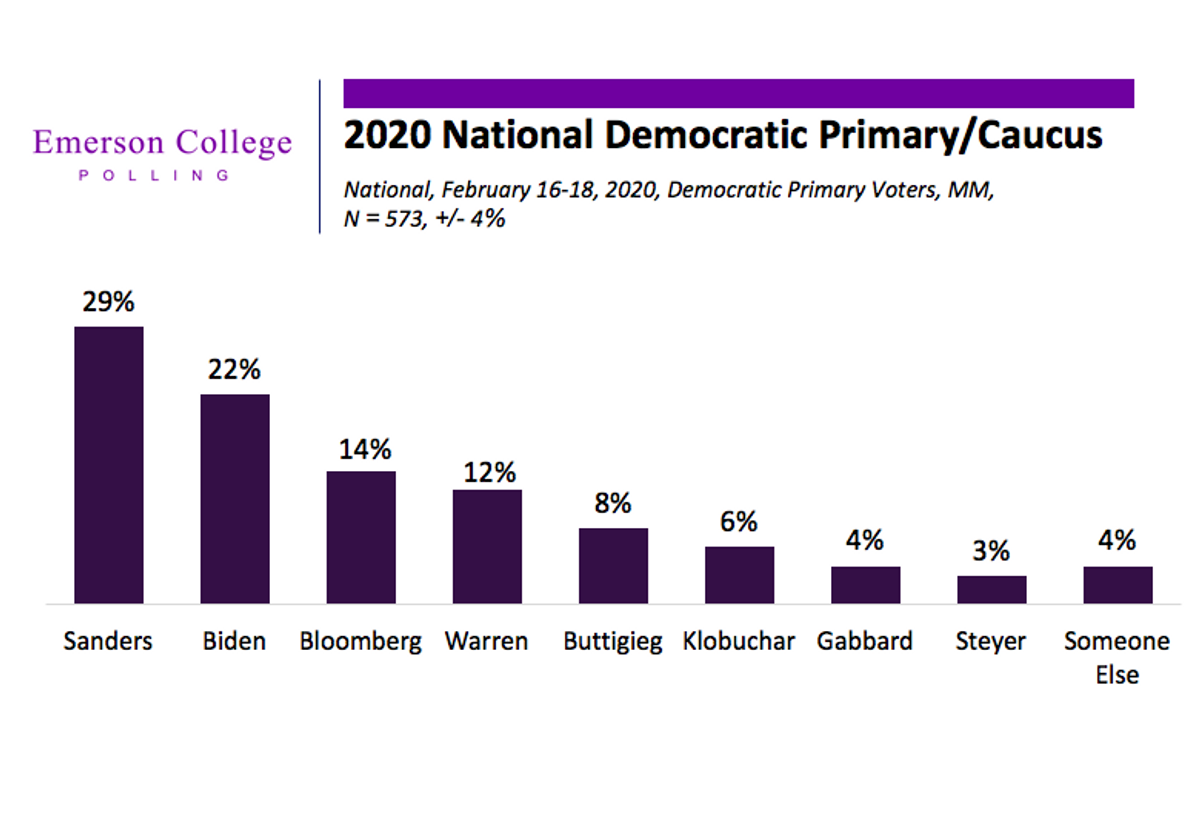 Spencer Kimball, Director of Emerson College Polling finds "Sanders continues to build upon his base and has solidified his position as the frontrunner. Biden has lost support, especially among African-Americans, which now opens the door for Bloomberg, maybe Buttigieg or even Klobuchar to win over the moderate voter and become the alternative to Sanders going into Super Tuesday."

Sanders continues to draw his base of support from younger voters as he garners 39% support among voters under 50. Following him in that group is Biden at 16%, Warren at 15%, and Bloomberg at 9%. Among voters 50 and over, Biden leads with 31% support, followed by Bloomberg at 20%, Sanders at 15%, Klobuchar at 9%, and Buttigieg at 8%. 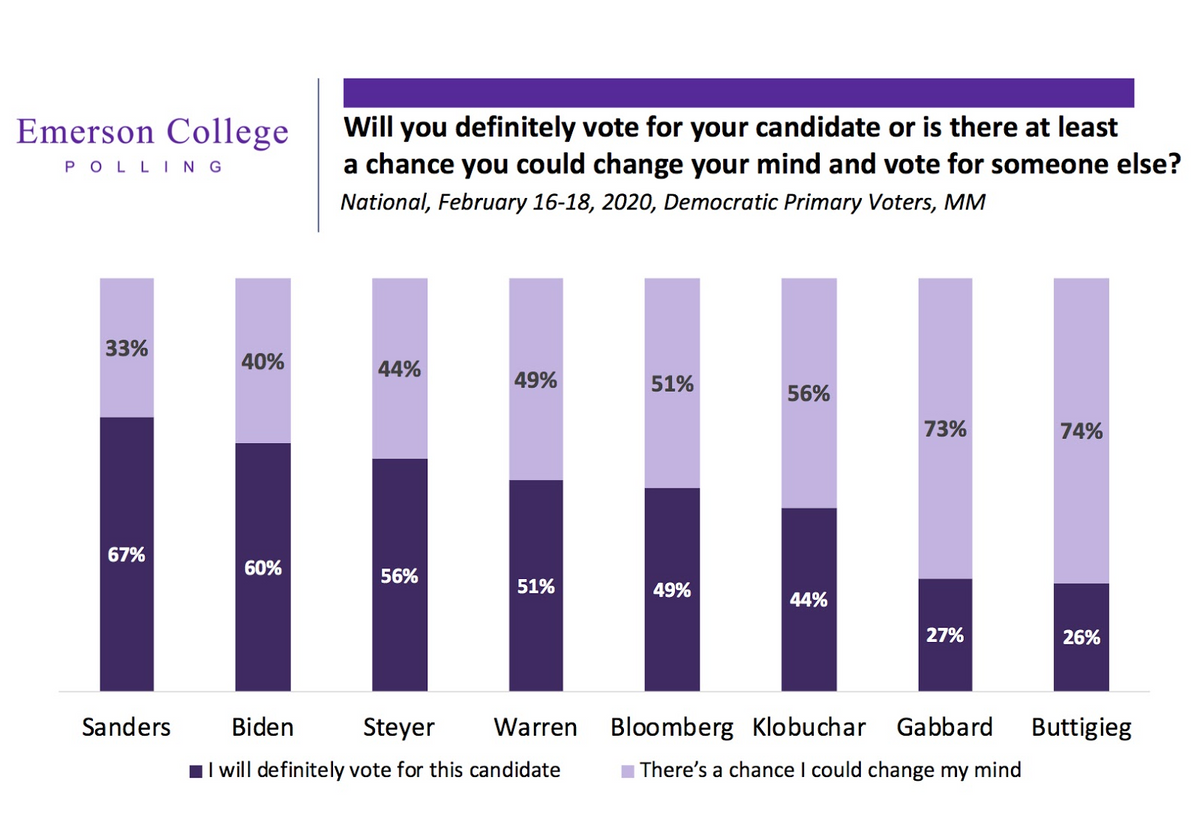 When asked whether they will support the Democratic nominee in the general election even if their preferred candidate does not get the nomination, 79% of Democratic primary voters said yes, 8% said no, and 13% said it depends on who the nominee is.

Respondents were also asked who they think will be the nominee, regardless of who they support. Sanders also lead in this question with 33%, followed by Biden with 22%, Bloomberg with 16%, Buttigieg with 8%, Klobuchar with 6% and Warren with 5%.

Democratic primary voters are split on which candidate would be the best to debate President Trump. Twenty-five percent (25%) said Sanders would be the best, followed by Biden at 23%, Bloomberg at 17% and Warren at 14%, the only candidates in double figures.

Democratic primary voters are also split on who they see as the best pick for Vice President with California Senator Kamala Harris as the top choice among 20% of Democratic primary voters, Entrepreneur Andrew Yang followed at 18% and Former Secretary of State Hillary Clinton was third at 16%. Stacey Abrams was picked by 8% of respondents, Former Rep. Beto O’Rourke got 6%, Ohio Senator Sherrod Brown received 5%, Andrew Gillum was chosen by 3% and Rep. Ilhan Omar was selected by 1% of respondents. A plurality of voters, 23%, said they would like to see someone other than the eight candidates listed in the question to be Vice President. 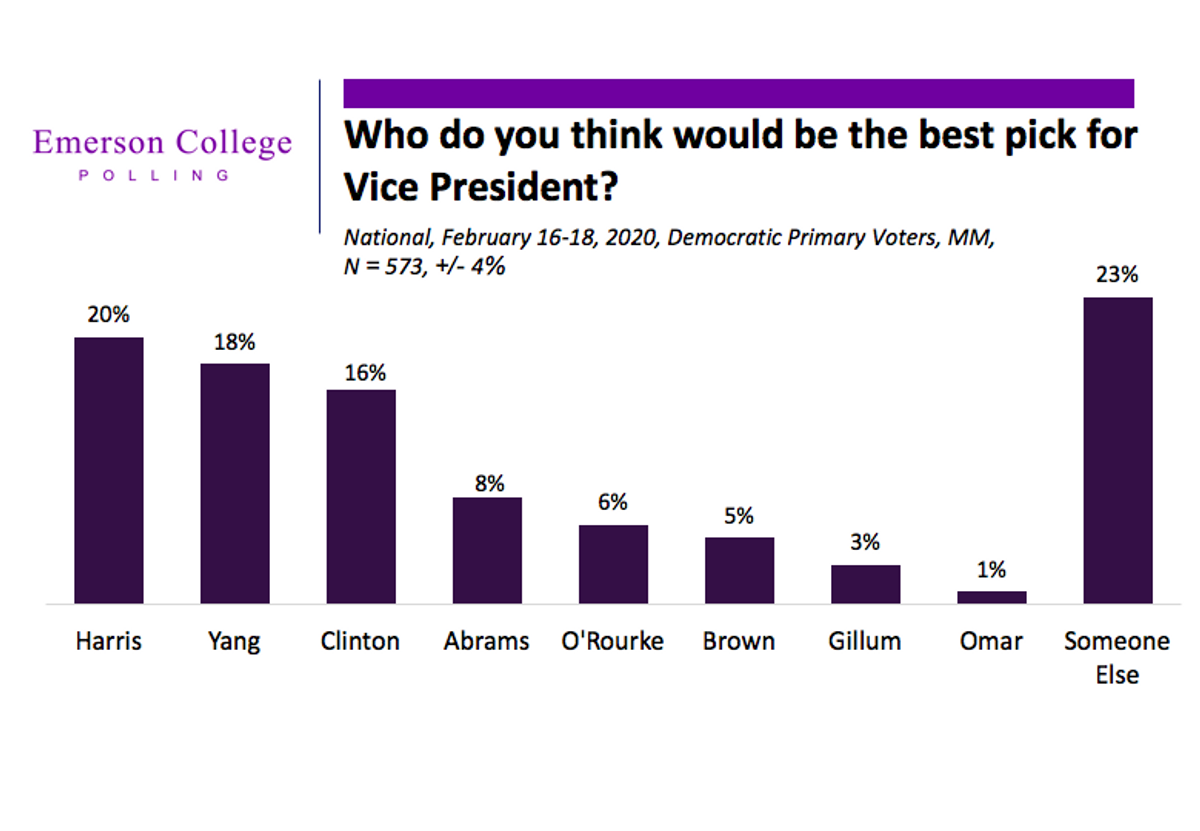 President Trump’s job performance rating of +4 points is the highest it has been since he took office. This month’s poll finds him at 48% approval and 44% disapproval, up from last month’s 47% approval and 48% disapproval. Emerson College Polling found Trump at 48% approval in December 2019, November 2019, and February 2017 as well but his disapproval numbers are lower now than they’ve ever been before. It also appears that there is no appetite within the GOP for a different nominee, as 91% said they would vote for Trump for the nomination in 2020.

In potential head-to-head match-ups, Trump leads 4 of his 5 democratic rivals, trailing only against Sanders 51% to 49%. The President leads Biden 52% to 48% and leads Bloomberg, Buttigieg, and Klobuchar 51% to 49%. 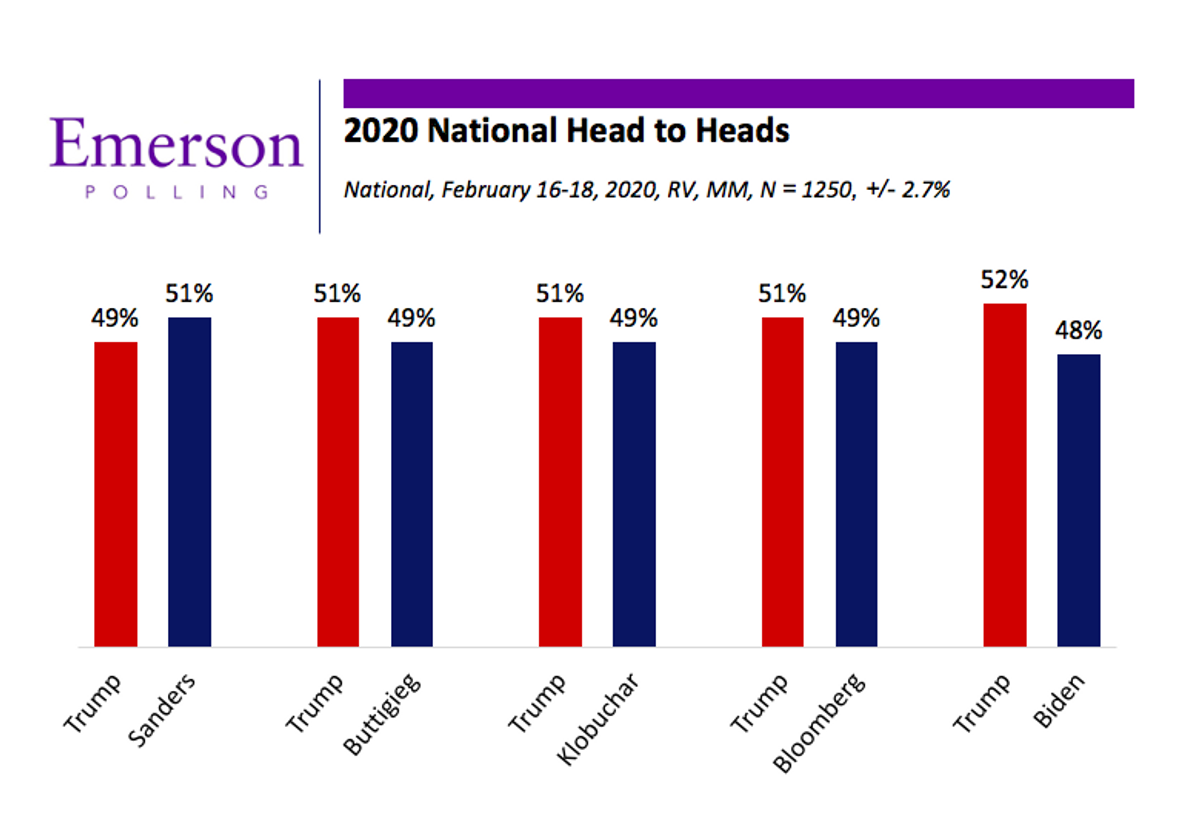 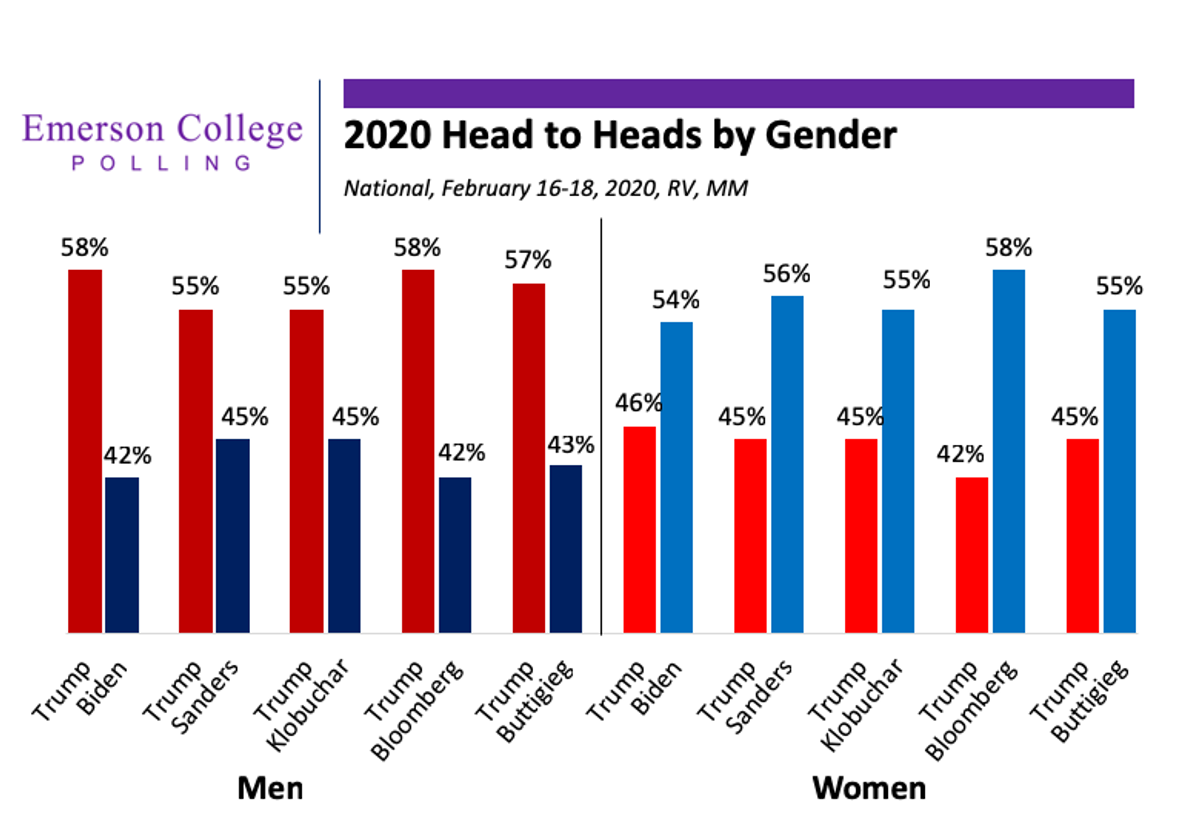 A slight majority, 53%, said they would take a vaccine for Coronavirus if it existed while 19% said they would not and 28% were unsure. About a third of voters, 33% said the federal government should have the surgeon general announce a warning, put in travel restrictions, and create mandatory quarantines and vaccines. Nearly 26% said just a travel restriction would be enough, 17% said the Surgeon General Announcement/guidance would be appropriate. Twelve-percent (12%) would like mandatory quarantines while 6% would like mandatory vaccines. About 7% said none of these actions should be taken.

The most important issue for voters is the economy at 29%, followed by healthcare at 20%. Social issues came in third at 12%, the Environment was at 9% and Immigration rounded out the top 5 at 8%.

The National Emerson College poll was conducted February 16-18, 2020 under the supervision of Assistant Professor Spencer Kimball. The sample consisted of registered voters, n=1,250, with a Credibility Interval (CI) similar to a poll’s margin of error (MOE) of +/- 2.7 percentage points. The data was weighted based on 2016 voter model of gender, education, age, mode, party registration, ethnicity, and region. It is important to remember that subsets based on gender, age, party breakdown, ethnicity and region carry with them higher margins of error, as the sample size is reduced. Data was collected using both an Interactive Voice Response (IVR) system of landlines only (n= 772) and an online panel provided by Amazon Turk (n= 478). 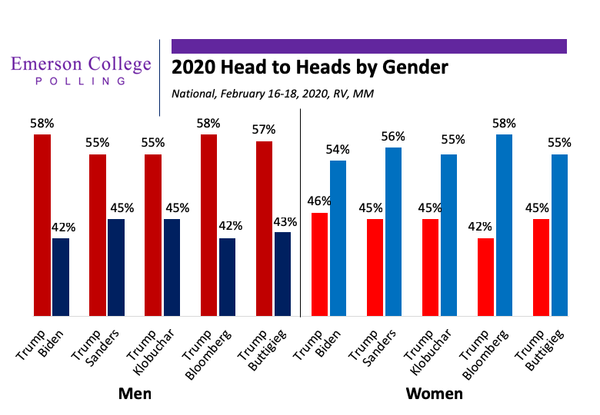 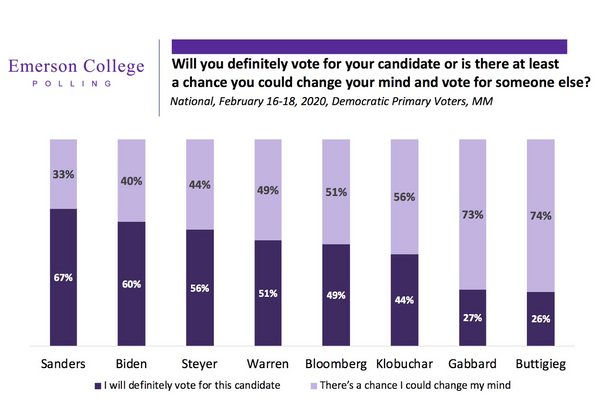 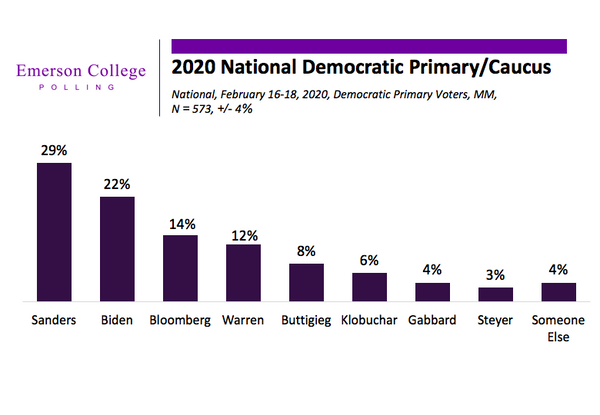 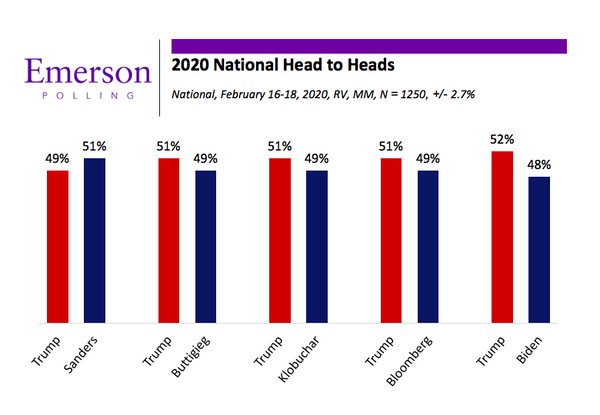 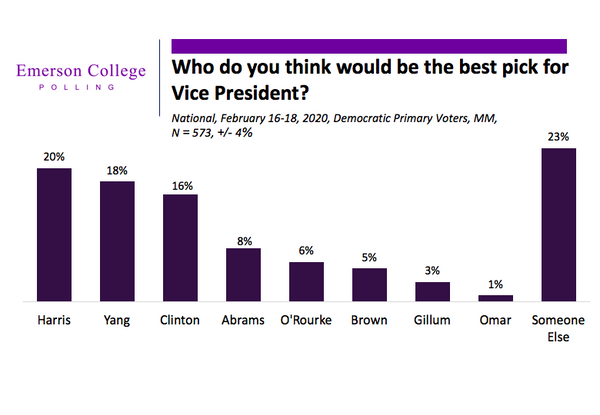