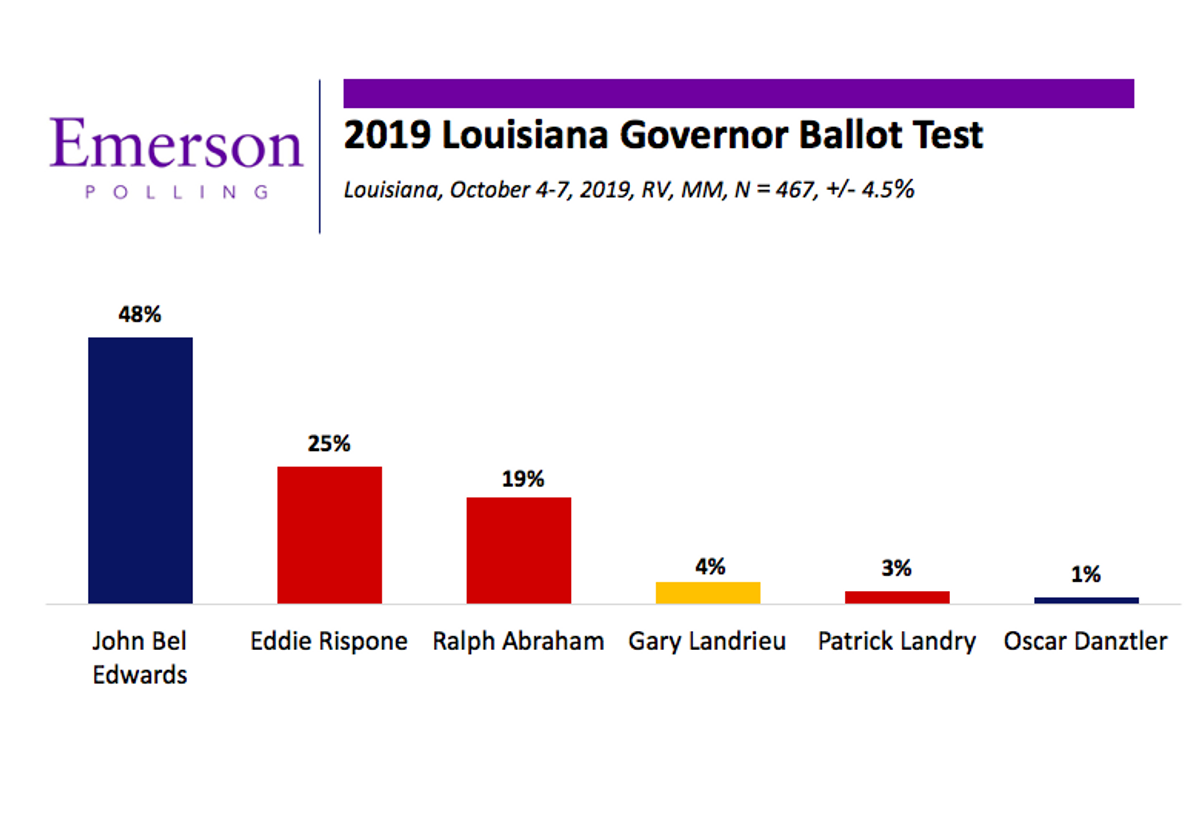 Spencer Kimball, Director of the Emerson Poll points out:  “the poll shows incumbent Governor Edwards with a chance to win the race outright. However, if he does fall short of 50%, there is a competitive race to watch between Rispone and Abraham to determine who will challenge Edwards on November 16th.”

Kimball went on to say that “this race is close enough that one of the third tier candidates winning just a few percentage points could pull enough of the vote to keep Edwards from clearing the 50% threshold, on the flip side a melt of support could put Edwards over the top.”

Respondents were first asked their vote preference with an option of undecided, of which 5% of voters said they were still undecided. These voters were then asked a follow up question asking which candidates they leaned toward at this time, Edwards took 43% of the undecided vote, which combined with his base vote moves him from 46% to 48%. Both Rispone and Abraham’s vote share increase by one percent, when the undecided voters are added to their total.

Edwards approval rating as Governor also falls at 48% approval, with 38% disapproval and 14% undecided.

Edwards’s base support is in the Eastern part of the state from New Orleans to Baton Rouge. Kimball suggests focusing on “ the 2nd, 5th and 6th congressional districts to see Edwards returns; If he exceeds expectations in those parts of the state, he has a real chance of winning 50% of the vote and winning the election outright.”

The Louisiana Emerson College poll was conducted October 4-7, 2019 under the Supervision of Emerson Polling Director Assistant Professor Spencer Kimball. The sample consisted of likely voters, n=467, with a Credibility Interval (CI) similar to a poll’s margin of error (MOE) of +/- 4.5 percentage points. The data was weighted by gender, party affiliation, age, and ethnicity based on 2016 turnout modeling. It is important to remember that subsets based on gender, age, party breakdown, ethnicity and region carry with them higher margins of error, as the sample size is reduced. Data was collected using an Interactive Voice Response (IVR) system of landlines only (n=248), an online panel provided by Amazon Turk (n=171) and cell phone (n=48) only responses via opt-in text message . 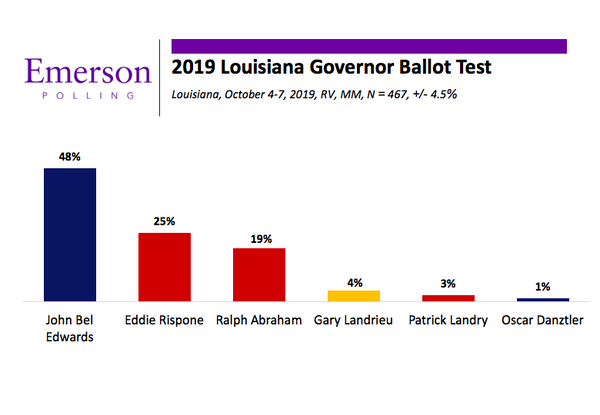