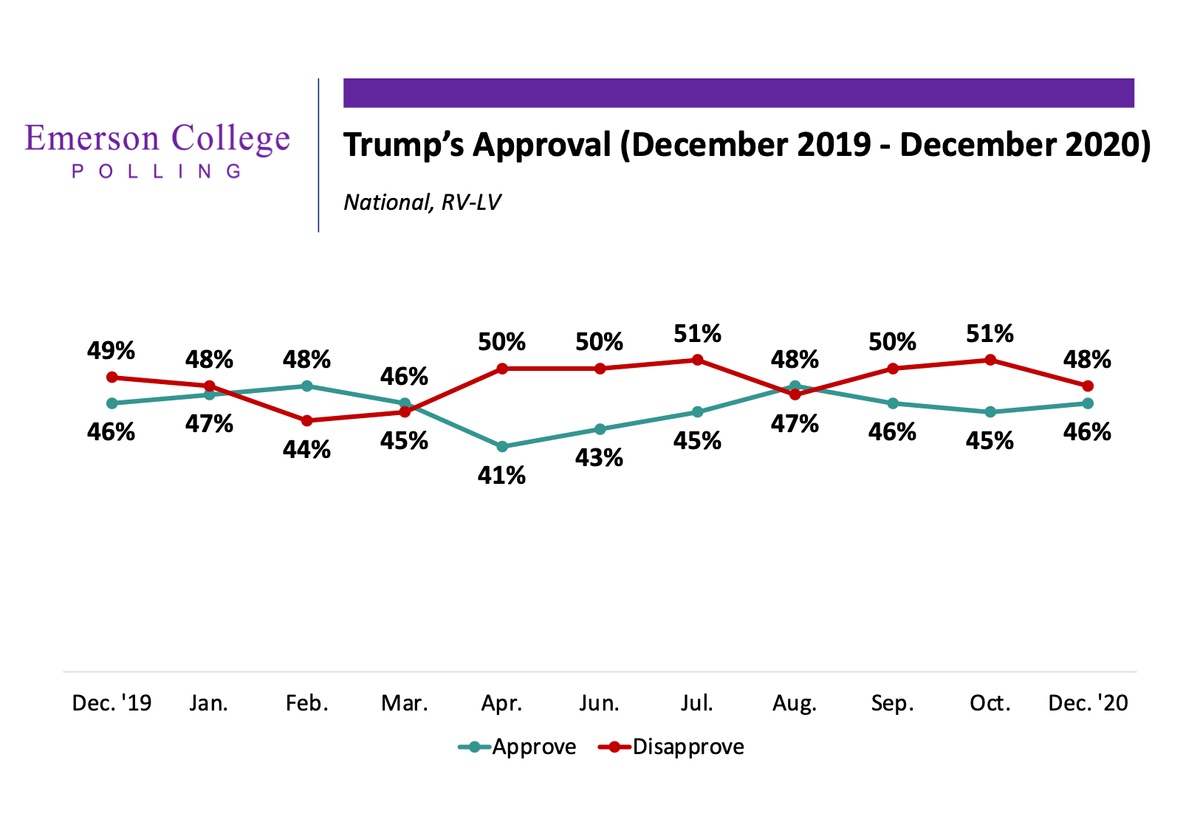 Spencer Kimball, Director of Emerson College Polling, said “it is surprising that after everything that has happened in this country over the last year, President Trump's popularity has remained virtually unchanged.”

Voters were asked to weigh in on Santa Clause’s naughty or nice list for this year. When asked about President Trump, 53% said he had been naughty, 36% said nice, and 11% were not sure. When asked about Joe Biden, 47% said he had been nice, 38% said naughty, and 15% were unsure. While voters' attitudes about Trump and Biden often just reflected their party affiliation, all voters agreed that they themselves have been good this year, 74% of Republicans reported themselves as nice, as compared to 70% of Democrats and 67% of Independents who reported themselves as nice. 71% of voters said Santa would rate them on the nice side, while 14% said they were naughty this year.

On a more serious note, nearly half of voters, 49%, said that the COVID-19 outbreak has negatively impacted their financial ability to buy gifts for their household this holiday season. The highest impact has been on Black/African American voters, as 61% report having less money for gifts this year, followed by 58% of Hispanic voters, 46% of White voters and 40% of Asian voters.

Voters overwhelmingly (76%) support a second payment of up to $1,200 for individuals earning under $99,000 as part of another stimulus package. Support for the stimulus checks cuts across party and geographical lines. Voters with postgraduate degrees or more, are the least supportive at 64%.

Spencer Kimball, Director of Emerson College Polling, notes that “it is clear some voters are struggling financially this holiday season and are looking toward the government for relief; it will be interesting to see if this relief is provided in the form of a second stimulus check.”

While the economy continues to be the top issue for a plurality of voters at 28%, COVID-19 response has seen steady growth in importance, and is the second most important issue at 25%, followed by social justice at 13%, healthcare at 12% and climate change at 8%. Ten percent (10%) of those polled said something else ranked as their top issue.

A majority (54%) of voters think COVID-19 is a major public health crisis, a six-point increase from 48% in October. Women are more likely to see COVID-19 as a major threat than men, 59% to 48%. Party affiliation also impacts the perception of risk, as 71% of Democrats said COVID-19 is a major risk, compared to 55% of Independents and just 33% of Republicans.

As 2020 comes to a close, 60% of voters think the United States is generally headed in the wrong direction, while 40% think the country is on the right track.

The December National Emerson College poll was conducted December 6-7, 2020. The sample consisted of Democratic, Republican, and Independent voters, n=1,277, with a Credibility Interval (CI) similar to a poll’s margin of error (MOE) of +/- 2.7 percentage points. The data sets were weighted by gender, age, education, race and region. It is important to remember that subsets based on gender, age, party breakdown, ethnicity, and region carry with them higher margins of error, as the sample size is reduced. Data was collected using an Interactive Voice Response (IVR) system of landlines (n=508) and an online panel (n=769). 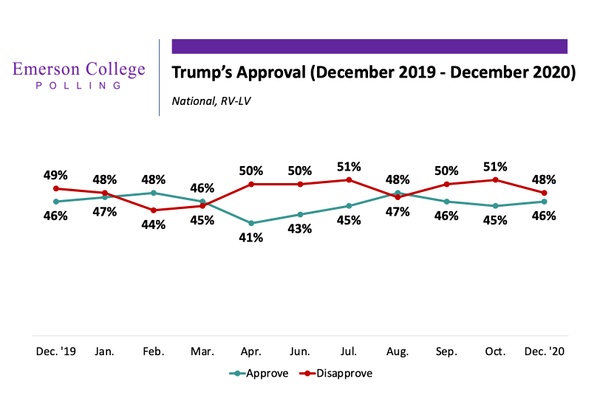 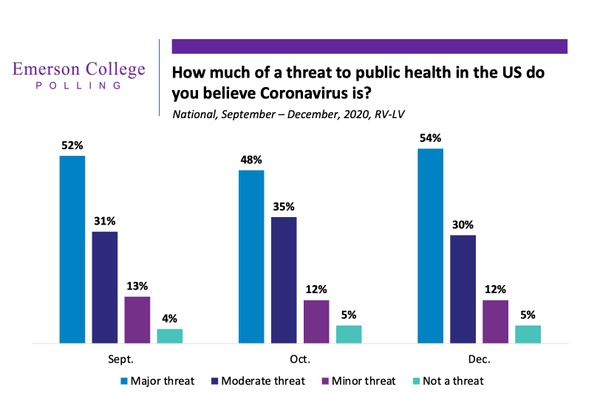