December National Poll: Biden and Sanders Pull Away from the Pack as Warren Falls

In the latest Emerson College/WHDH National Poll of the Democratic Primary, former Vice President Joe Biden leads at 32%, followed by Senator Bernie Sanders at 25%. Senator Elizabeth Warren comes in third at 12%, followed by Mayor Pete Buttigieg at 8%, and entrepreneur Andrew Yang at 6% is rounding out the top 5 (n=525, +/- 4.2%). 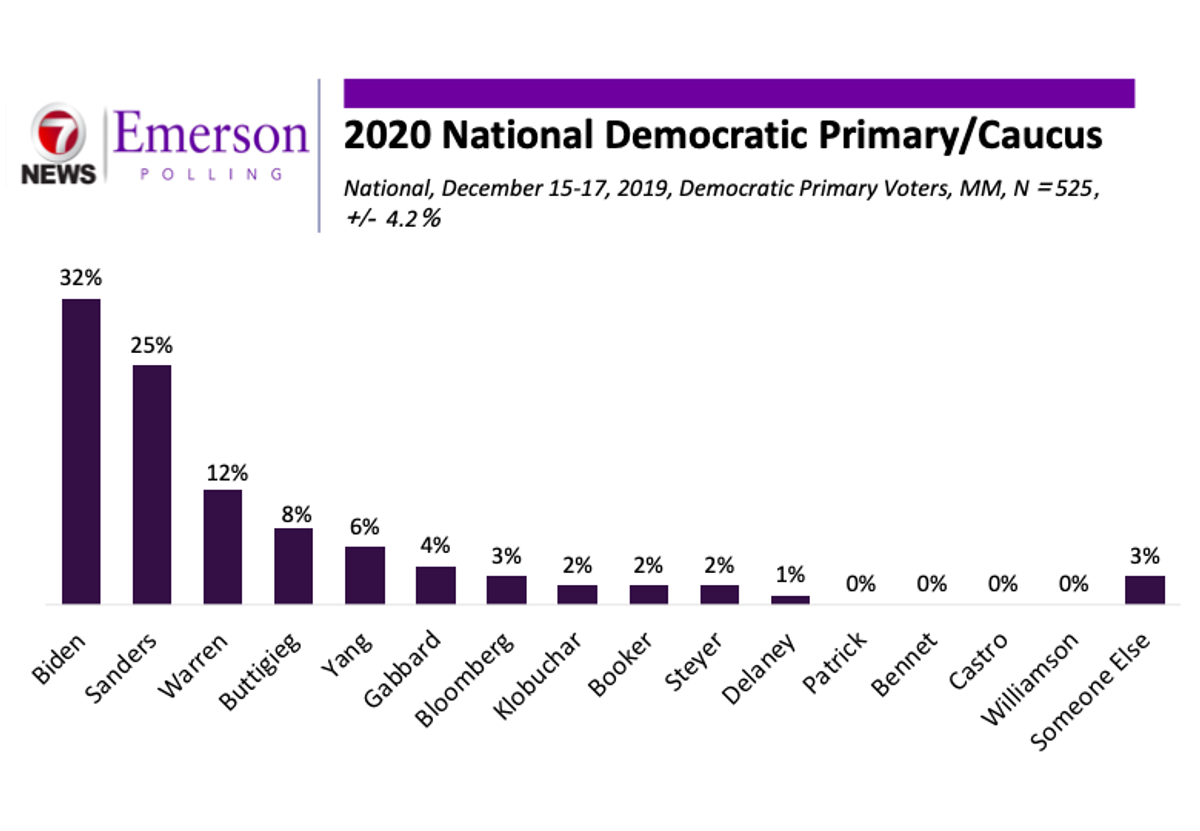 Since the Emerson November poll, Biden has increased his support by 5 points, Sanders has lost 2 points, and Warren has dropped 8 points.

The base of Sanders support is younger voters; he receives 36% support from voters under 50. Following him among this group is Biden with 22%, Warren with 12%, and Yang with 10%. With voters 50 and over, Biden has a commanding lead with 45%, followed by Warren with 14%, and Sanders and Buttigieg with 10%.

Director of Emerson Polling Spencer Kimball notes that “Warren appears to be losing to Sanders with younger voters, and losing to Biden with older voters, making it difficult for her to secure a base. With less than 50 days until the Iowa caucus, this strategy of waiting for Sanders or Biden to fall is looking shaky.”

Research assistant Brendan Kane notes that “the fact that Pete Buttigieg garners absolutely no support among African-American and Hispanic voters is a major problem for his campaign as he will struggle to compete in the early states beyond Iowa and New Hampshire unless that changes.”

Democratic voters are not completely set on a particular candidate: 49% say there’s a chance they could change their minds; however, Sanders supporters are the most set: 71% saying they will definitely vote for him, similarly 57% of Biden voters definitely will vote for Biden. On the flip side, 29% of Buttigieg and 28% of Warren voters indicated they plan to stick with their candidate.

If Hillary Clinton entered the race, 26% of Democratic voters said they would vote for her instead of their current choice. Clinton pulls her hypothetical vote primarily from Biden (35%) and Warren (26%) voters.

President Trump’s approval rating slightly decreased from 48% in November to 46% now, with his disapproval moving up from 47% to 49%. This increase in Trump's disapproval ratings is despite the approval of the announcement of the USMCA trade deal between the US, Canada, and Mexico, which 44% of voters approve and only 10% disapprove. Trump also continues to dominate his potential GOP primary opponents with 90% of the vote.

Voters continue to remain divided on the impeachment of Trump at 45% support to 45% oppose, a slight tick up from November when support for impeachment was at 43% and opposition was at 45%.

Looking at the general election, Trump is now trailing three of his major potential rivals and is tied at 50% with Buttigieg. Biden and Sanders lead 52% to 48% and Warren leads 51% to 49%. This is a change from the November national poll, where Trump led against Biden and Buttigieg and was tied with Warren. 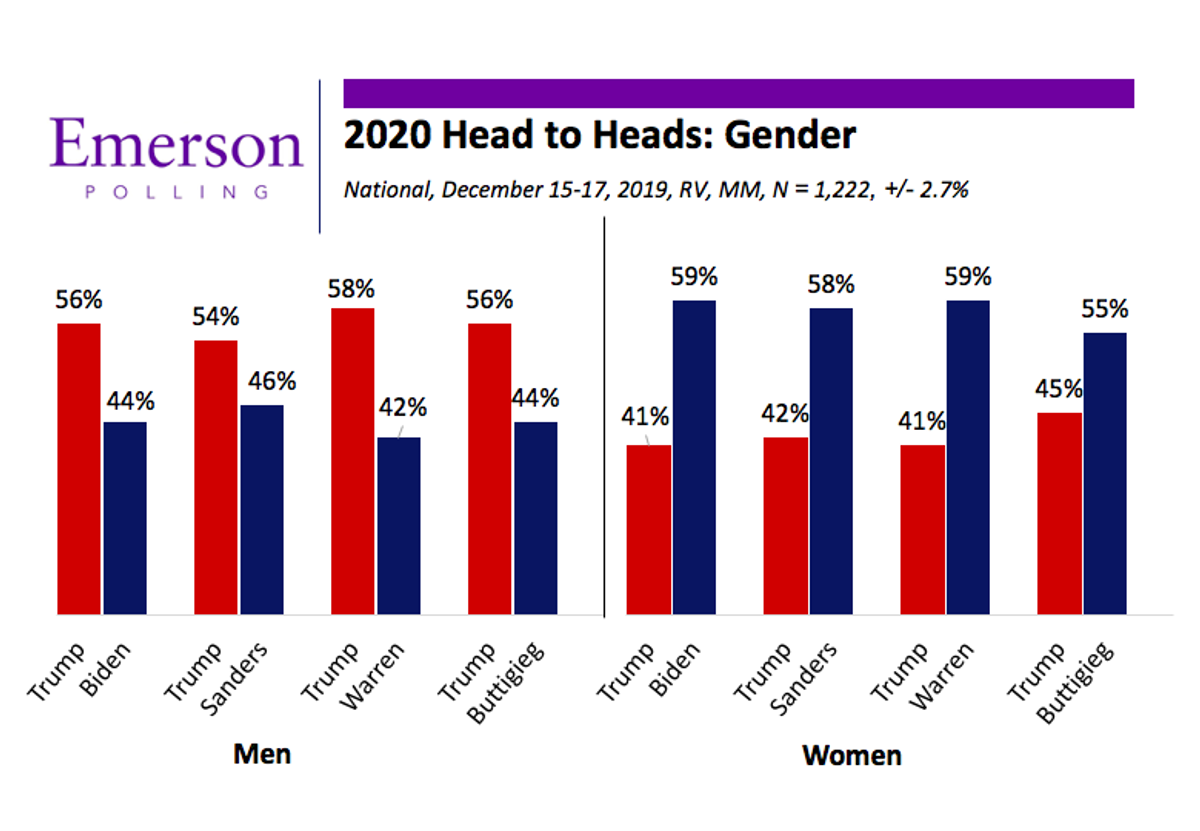 Voters are split regarding which healthcare proposal they most support: Medicare for all has a plurality of support at 32%, both the public option and keeping the current system are equally popular at 26% each, with 16% undecided. However, on which policy voters least support, Medicare for All was at 42%, keeping the current system is at 27%, the public option is at 10%, with undecided at 21%. 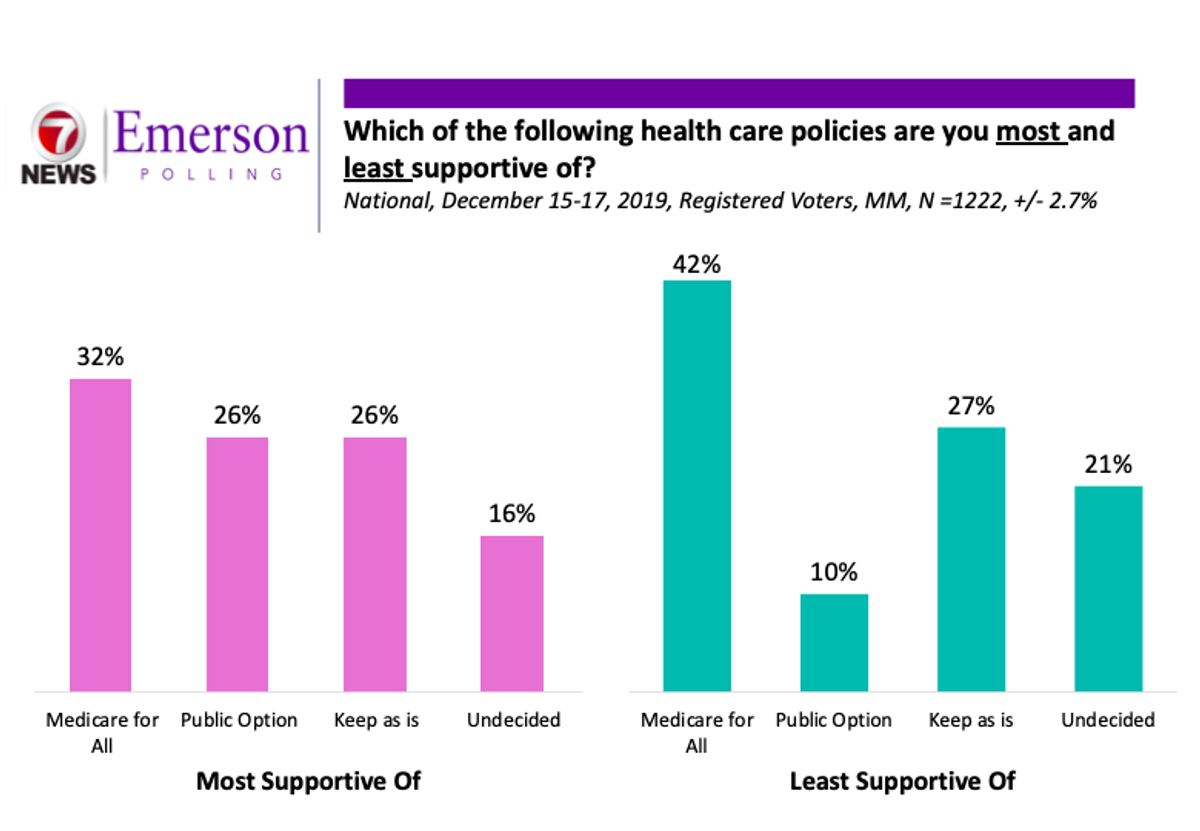 When greeting people this holiday season, “Merry Christmas” is the preference of a majority of voters at 65% while Happy Holidays is preferred by 27%.

A plurality of voters, 37% think this decade was worse than the previous decade, 32% thought it was better. However, voters are optimistic about the decade ahead, with 38% thinking it will be better than this decade and 25% saying it will be worse.

The National Emerson College poll was conducted December 15-17 2019 under the supervision of Assistant Professor Spencer Kimball. The sample consisted of registered voters, n= 1,222, with a Credibility Interval (CI) similar to a poll’s margin of error (MOE) of +/- 2.7 percentage points. The data was weighted based on 2016 voter model of gender, education, age, mode, party registration, ethnicity, and region. It is important to remember that subsets based on gender, age, party breakdown, ethnicity and region carry with them higher margins of error, as the sample size is reduced. Data was collected using both an Interactive Voice Response (IVR) system of landlines only (n= 809) and an online panel provided by Amazon Turk (n= 413). 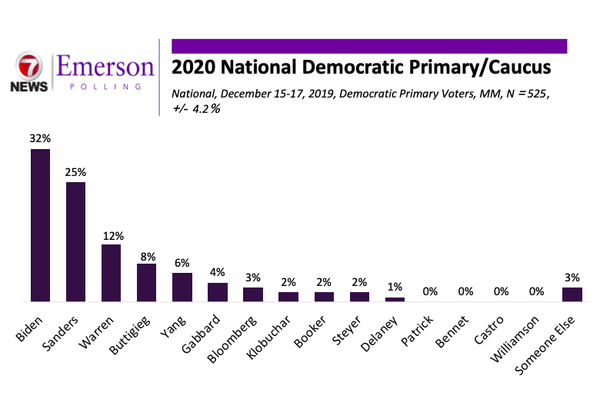 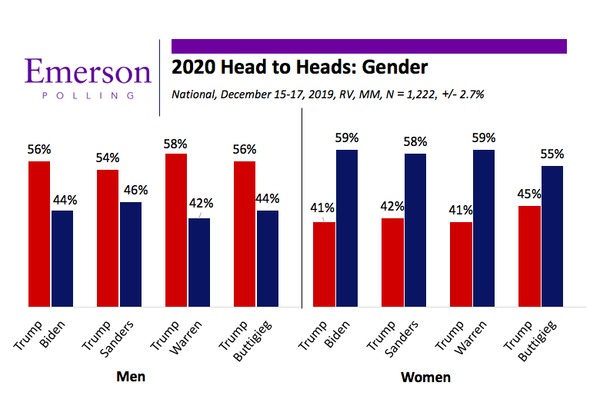 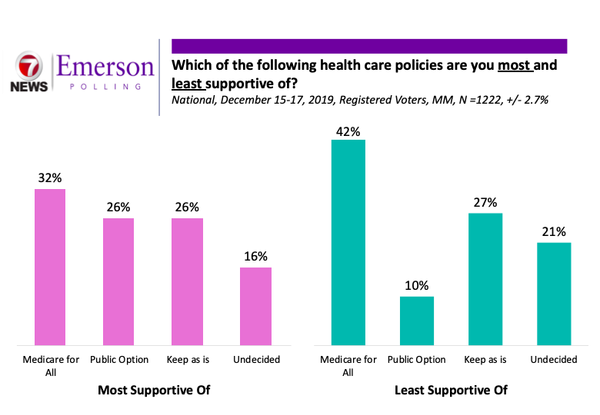