Most New Yorkers Observed Holidays Remotely; Educating Kids at Home Harder for Parents with Less Education; Governor Cuomo is the Most Trusted Source of Information

The latest CUNY coronavirus tracking survey found that a majority of (77%) of New Yorkers who typically attend holiday services found alternative ways to practice their faith during Easter and Passover week. Among the observant, 43% reported watching or listening to services on TV or radio, while 29% took part online. About one in five people (22%) who normally observe the holidays said they did not this year because of the virus. These findings are part of the fifth weekly city and statewide tracking survey from the CUNY Graduate School of Public Health & Health Policy (CUNY SPH), conducted April 10-12. 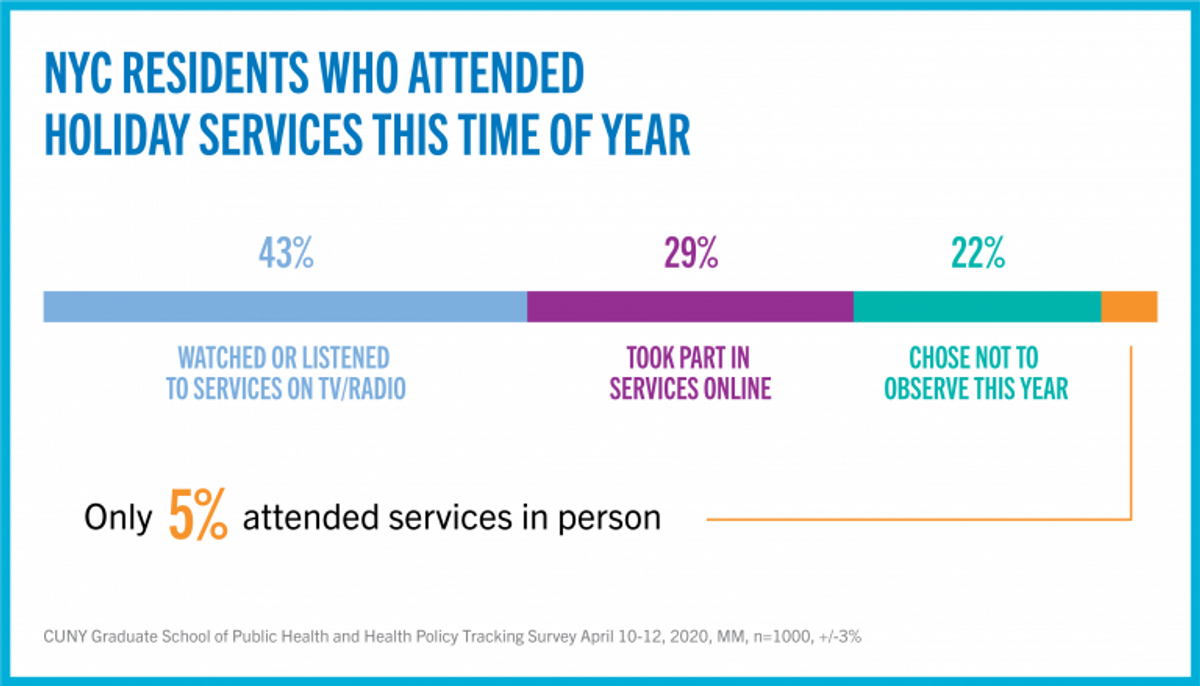 Schooling at Home a Challenge

In households with lower levels of education, children are finding greater difficulty with distance learning. Just more than a third (37%) of those with a high school degree or less report that their child is able to complete all their on-line coursework, compared with 67% of parents with some college or more who report their child is able to do so. The differences diminish considerably for home-schooling that does not require online assignments, with 56% of parents with high school degrees or less reporting homeschooling going well, compared to 62% of parents with some college or more. Similar results were seen when household income levels were compared. 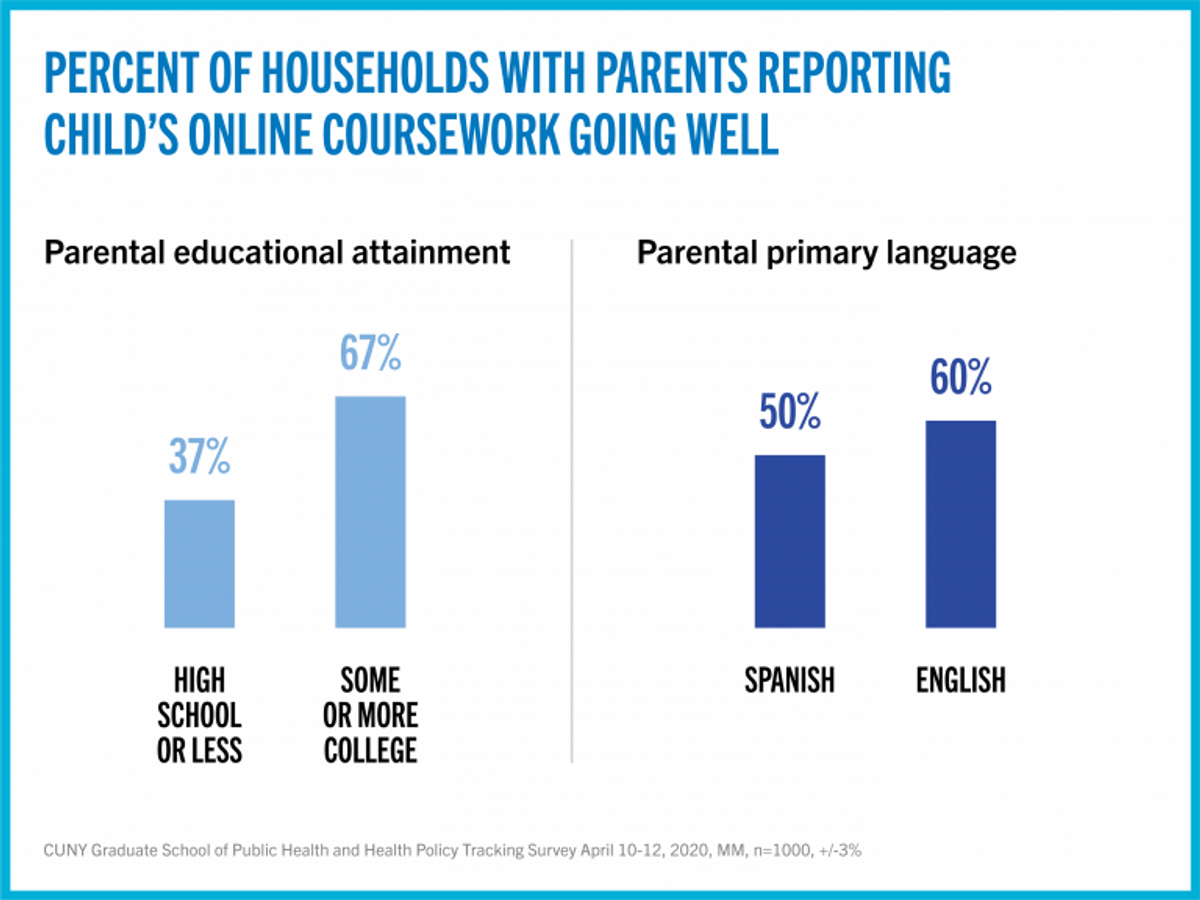 “Many New York parents seem to be coping with the challenge of schooling their children at home,” said CUNY SPH Dean Ayman El-Mohandes. “However, when it comes to schoolwork delivered on-line, families with fewer years of education and those responding in Spanish experience the greatest challenges. Their children risk falling behind in the future and deserve immediate attention.”

Among respondents to this poll, 30% report having a child under 18 in their household. Of these families, 57% report no difficulties for their child participating in online instruction. The same percentage (57%) reported that their child has been able to do all the online work expected. One in five (19%) reported problems accessing the internet, and one in ten (9%) reported general difficulties using the program. Only 7% report difficulties with providing appropriate space for learning.

A similar percentage (59%) of all parents who are schooling their children at home without an online component reported things going very well. But one in four (25%) reported a lot of trouble, and 12% reported that it is causing a lot of stress and anxiety.

About one in four New Yorkers (26%) think a vaccine will be available within six months and about (27%) think it will take a year or longer.

If a COVID-19 vaccine were to become available, 53% of New Yorkers said they would take it, 29% would not and 18% were unsure. Week three of the survey showed stronger support for taking the vaccine (62%). This decline parallels that of respondents’ perception of their likelihood of infection (58% in week three; 52% in week five). 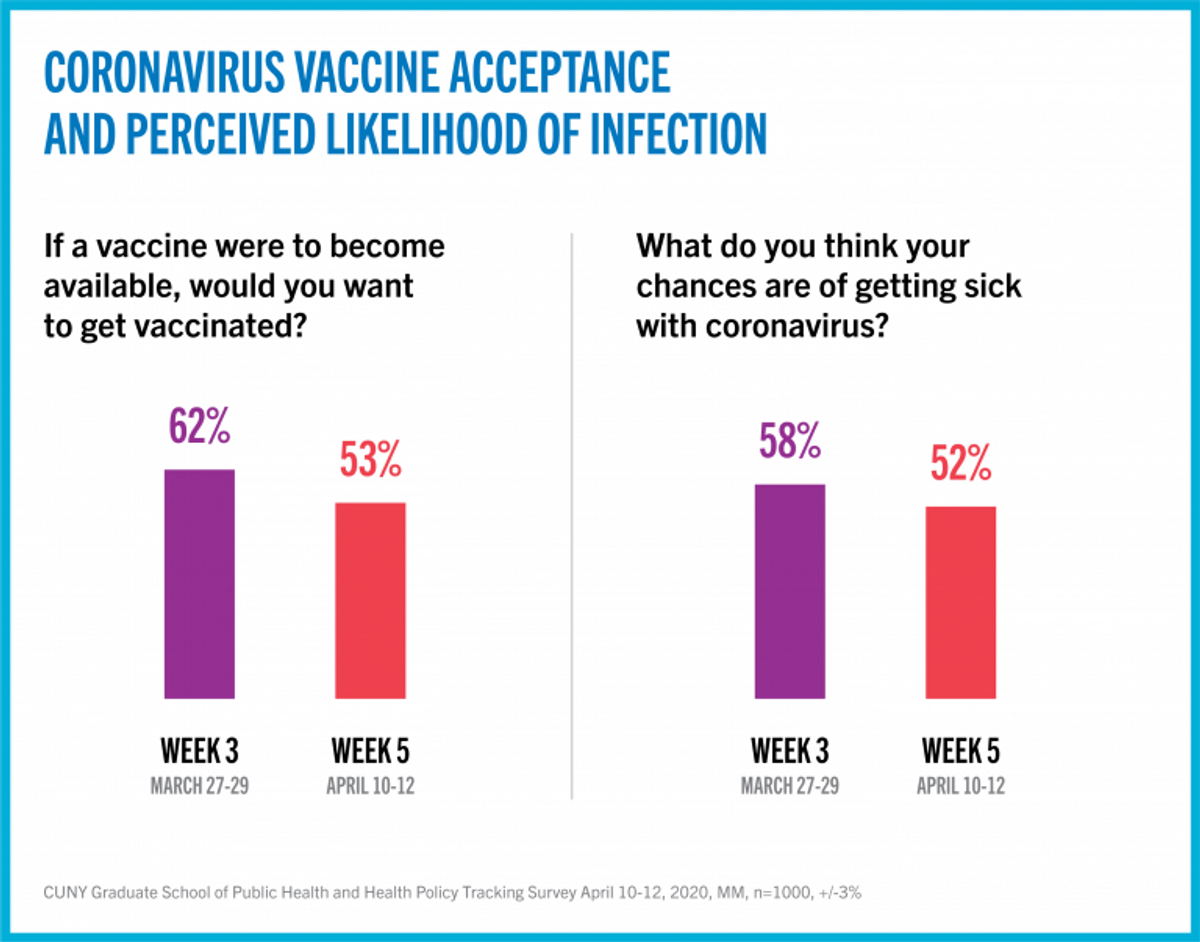 Racial/ethnic group was a key variable on vaccine acceptance. Latinx/Hispanics were least likely to say they would get vaccinated (30%), followed by African Americans (50%); Caucasians (71%) and Asians (73%) were significantly more likely to accept vaccination.

Dr. Scott Ratzan, Distinguished Lecturer at CUNY SPH, says, “Medical and public health experts believe that only a coronavirus vaccine can truly protect us from future outbreaks, and a massive effort is underway to produce a new vaccine in record time. But what if the effort succeeds and large numbers of people decide not to vaccinate themselves or their children? Right now, barely more than half of New Yorkers tell us they’ll do that. If that is the case, we won’t be able to protect our community against a new wave of coronavirus infections.”

More than a third (35%) of New York City residents say they trust Governor Andrew Cuomo the most for information about the coronavirus. The CDC ranked second at 18%, with television news following at 13%, the WHO and President Trump both at 8%. Social media (5%), Mayor Bill De Blasio (4%), print media (3%) and family and friends at 2% rounded out the top nine most trusted sources. 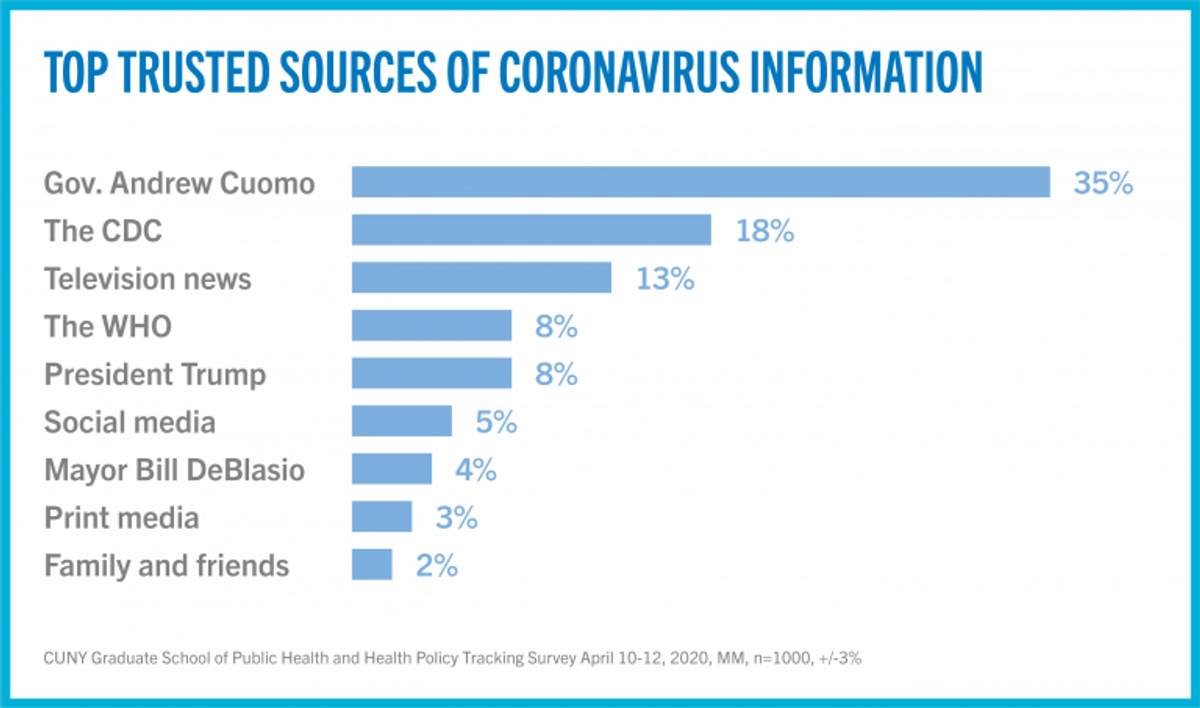 One in three (34%) New Yorkers were unable to pay their rent or mortgage this month. This was lower than they had anticipated two weeks ago, when 40% believed they would not be able to pay.

Among those who were unable to pay their rent, 62% said they feared eviction.

Latinx/Hispanics (45%) and African Americans (38%) most often reported housing issues, compared to 22% of Asians and 21% of Caucasians.

Respondents above the age of 60 were least likely to report housing difficulties.

Nineteen percent (19%) of New Yorkers said they have witnessed or experienced expressions of racism, violence, or harassment related to the coronavirus pandemic.

This week, one in ten New Yorkers (10%) said they have been tested for the virus, an eightfold increase compared to week three (1.3%).

Slightly more than half (52%) of New York City residents think they have a high chance of getting sick with the virus; the greatest perception of risk was two weeks ago (58%). A consistent generational trend continues with older groups perceiving less risk.

There continues to be an increase in respondents who know someone who has the virus. This week almost half (49%) knew someone who had tested positive for the virus, up from 43% in week four, 30% in week three and 15% in week two.

The number of people reporting someone sick with a fever or symptoms associated with coronavirus in their own household has stayed the same (11%) for the third straight week.

When asked about taking Hydroxychloroquine, 45% said they would not ask their doctor to prescribe it until FDA or medical studies confirm that it works, 34% would request it if they had symptoms and 11% want to begin taking it now to prevent COVID-19. Eleven percent (11%) reported they would not take any medicines.

Males were significantly more likely to be willing to take Hydroxychloroquine (50%) than females (40%).

The complete survey results and related commentary can be found at https://sph.cuny.edu/research/covid-19-tracking-survey/week-5 and JHC Impact, an initiative of the Journal of Health Communication: International Perspectives. 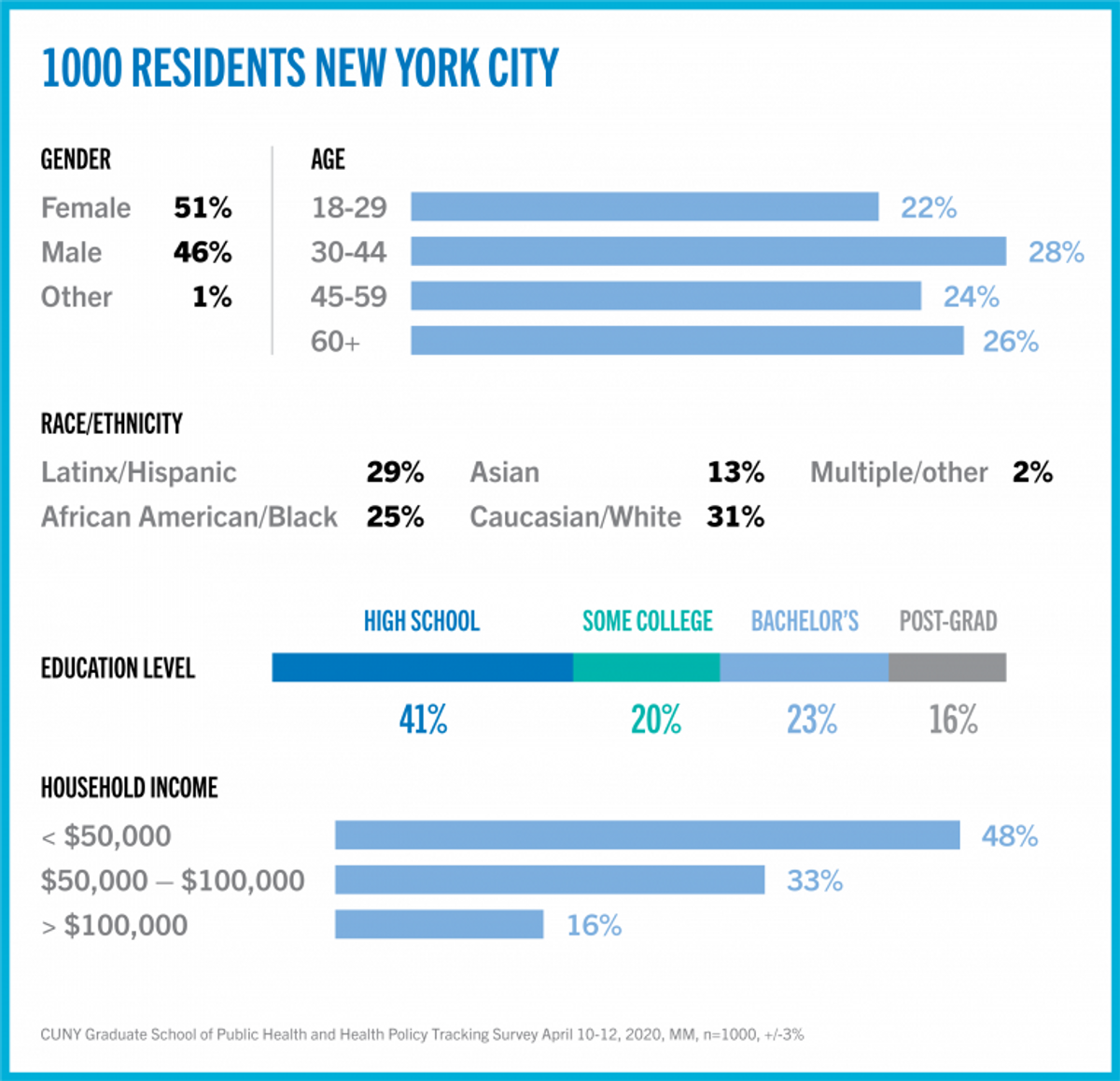 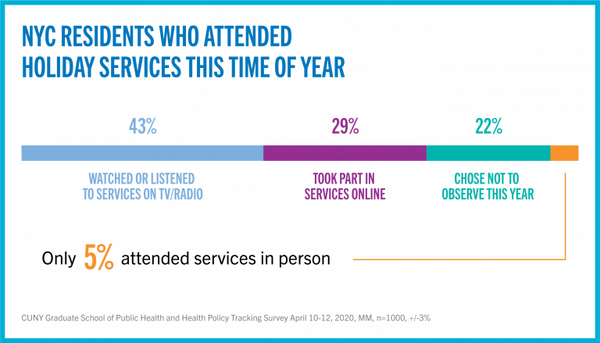 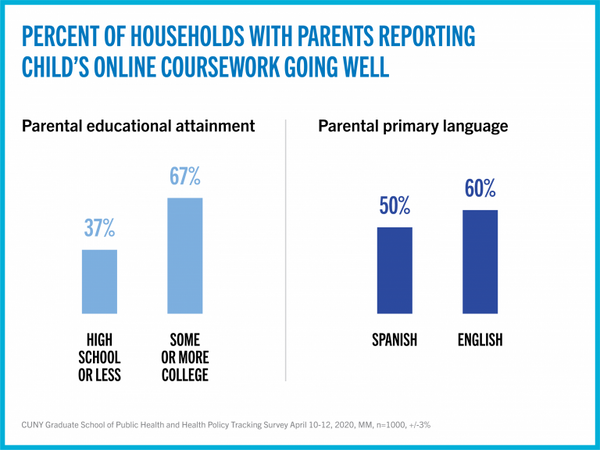 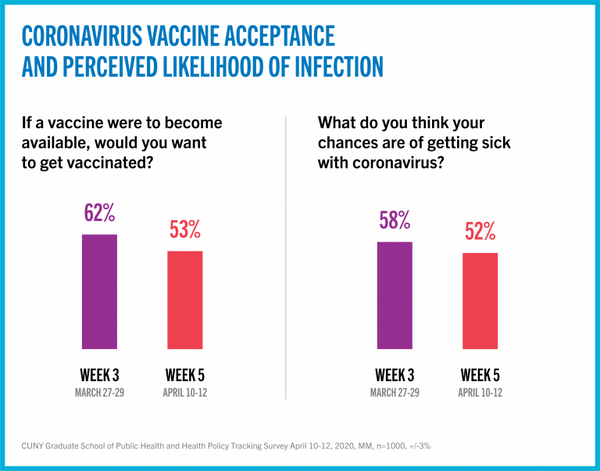 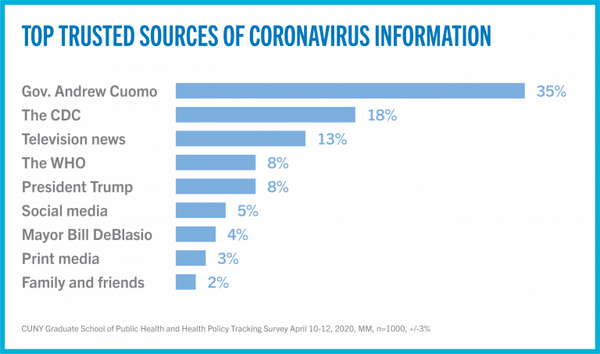 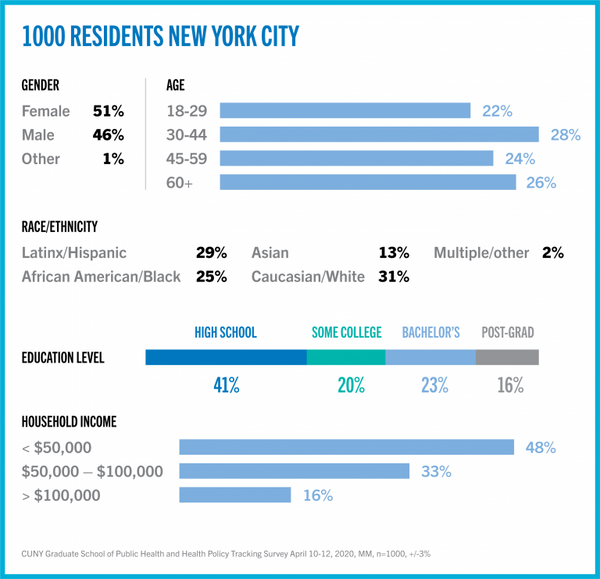