Coronavirus testing geared up in New York over the past week, but only 8% of our 1000 NYC survey respondents reported they had been tested to date. The great majority of these people (74%) said their test took place over the last two weeks and 40% mentioned that it took place just “within the last few days.” These findings are part of the seventh weekly city and statewide tracking survey from the CUNY Graduate School of Public Health & Health Policy (CUNY SPH) conducted April 24-26.

A number of the questions on the CUNY survey asked respondents to answer on behalf of everyone in their household, which included 2,772* men, women, and children. Among this household cohort, the test rate was 5.7% and close to half tested positive. Sixty percent (60%) of respondents who tested positive believe they were exposed at home.

More than one in eight respondents (12%) said they were unable to get tested for coronavirus by a healthcare professional. Of this group, 61% said they were told that they did not exhibit enough symptoms and 17% reported not being able to pay for the test. 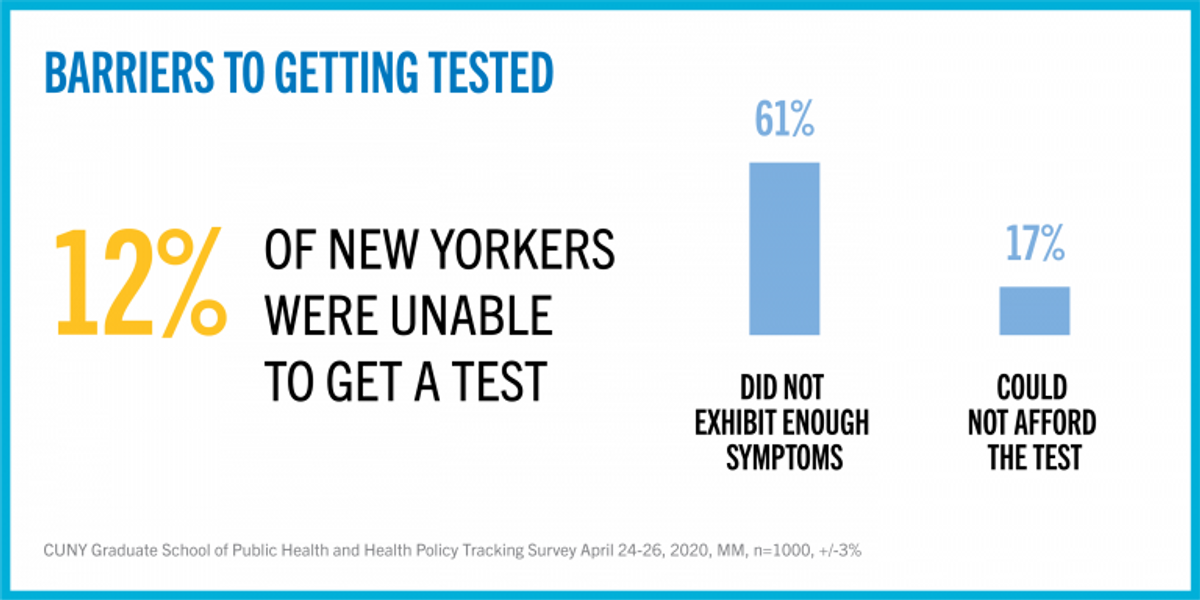 The increased demand for testing may be based on what respondents experience daily. More than a third of them (36%) said they knew someone who has died from COVID-19. That percentage was highest among Hispanics (44%), followed by whites (36%), African Americans (35%) and Asians (21%).

“The recent increase in COVID-19 testing is encouraging, but the focus remains on people who are symptomatic,” said Dr. Ayman El-Mohandes, Dean of CUNY SPH. “As we plan to return to less restricted daily activities and restore more business operations successfully, testing must become widely available, routine, and not selective.”

Economic issues: Assistance on the Upswing?

More than one in eight (13%) New Yorkers reported losing their health insurance since the epidemic started. Racial and ethnic differences were considerable. Latinos (23%) and African Americans (14%) were more likely to have lost their health insurance, compared to just 6% of Asians (6%) and whites (6%). 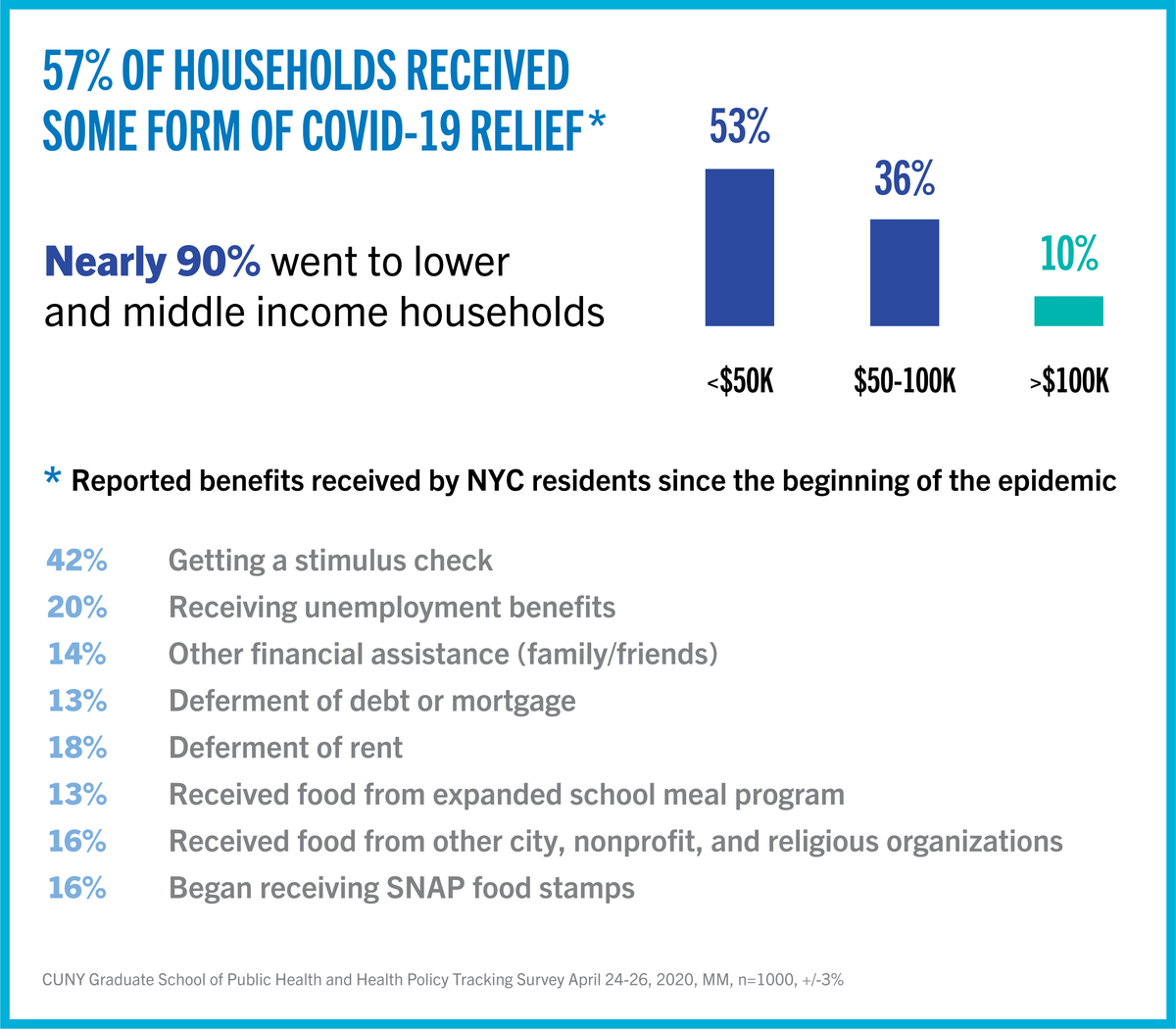 New Yorkers did report receiving a wide range of public and private, financial and in-kind assistance since the beginning of the coronavirus outbreak. Of the 57% of respondents who received some form of benefits or relief, 89% were from lower- and middle-income groups and the majority were lower income, showing the cross-cutting impact of the epidemic and the reach of assistance programs.

Benefits received by NYC residents since the beginning of the epidemic:

“Fortunately, many New Yorkers are using newly expanded public programs to reduce hunger and food insecurity, mitigating one of the most serious immediate consequences of the epidemic’s economic and social disruptions,” said Nicholas Freudenberg, Distinguished Professor of Public Health at CUNY SPH and Director of its Urban Food Policy Institute.

Signs of Resistance to a Coronavirus Vaccine?

Although many scientists and public health authorities have stated that a coronavirus vaccine is the only way to assure protection against COVID-19, a substantial minority of New Yorkers seem not enthusiastic about it. While a majority (59%) of respondents said that they would get a vaccine if it became available, still fewer (53%) said they would give it to their children. Moreover, only 31% expressed interest in volunteering for a clinical trial of a potential coronavirus vaccine, with wide variation across ethnic and racial groups (47% Asian, 36% white, 26% Latinx/Hispanic, 22% African American).

Another worrisome indicator is that less than half (45%) of New Yorkers reported being vaccinated for the flu this past season and 20% of respondents said they have never been vaccinated for flu at all.

“Given the substantial pockets of resistance to vaccination that had arisen in New York and elsewhere prior to the coronavirus pandemic, we have every reason to be concerned about numbers like these,” stated Dr. Scott Ratzan, Distinguished Lecturer at CUNY SPH and director of the coronavirus tracking survey project. “As researchers move forward with studies in more than 150 potential coronavirus vaccines, we would do well to develop a parallel range of communication efforts to promote them amongst populations with varying levels of education.”

*Household cohort was calculated by asking respondents to give the number of members living within the household. This number was used to calculate that from the n=1,000 respondents, the total people living in these households was n=2,772. 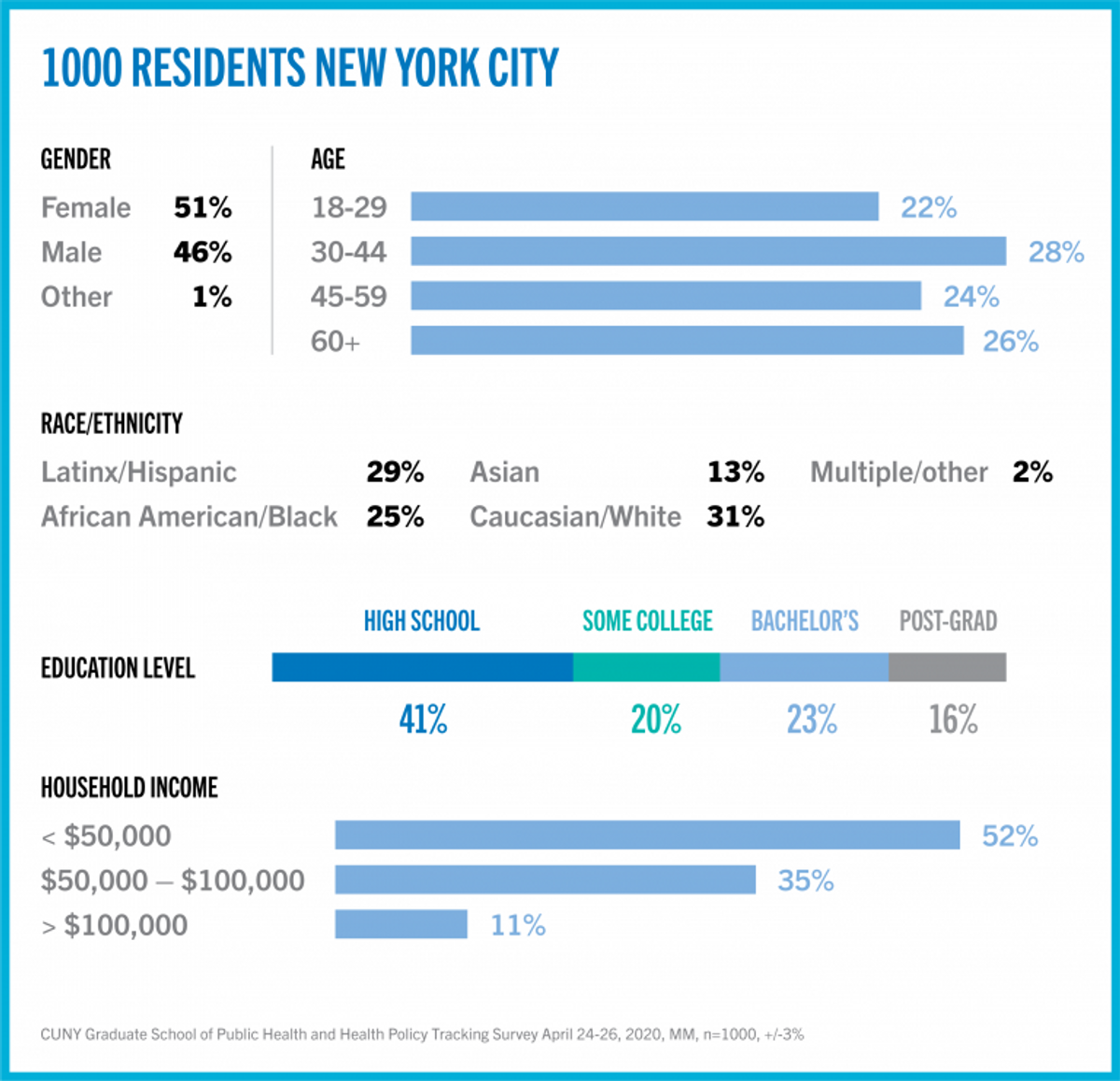 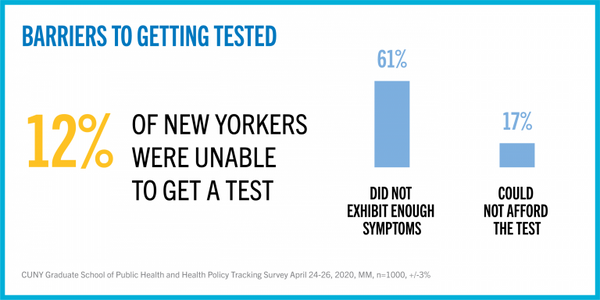 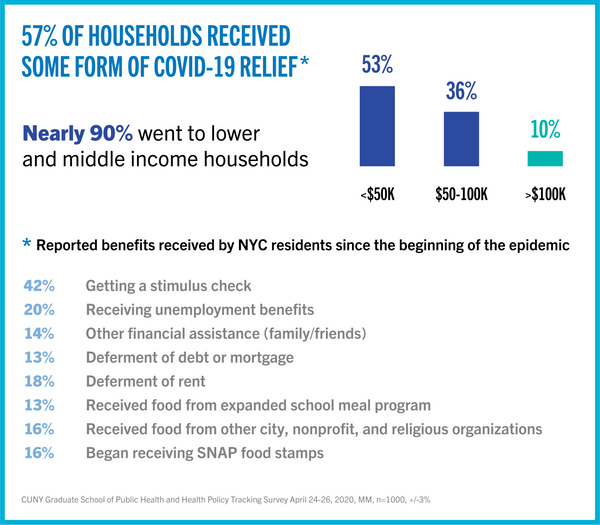 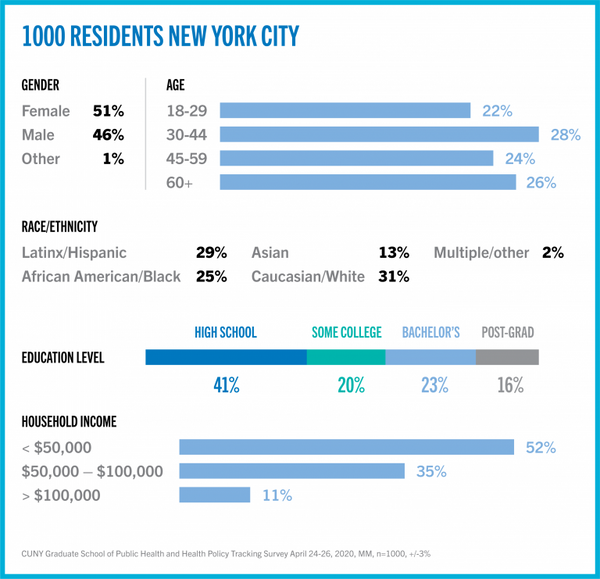