A new Emerson Poll finds a very competitive primary shaping up for Super Tuesday 2020 in Colorado with Sen. Bernie Sanders at 26%, former VP Joe Biden at 25% and Sen. Elizabeth Warren at 20%. Sen. Kamala Harris was the only other candidate to break double digits at 13%. Colorado Senator Michael Bennet is polling at 1%. The data was collected August 16-19, n=403, +/-4.8%. 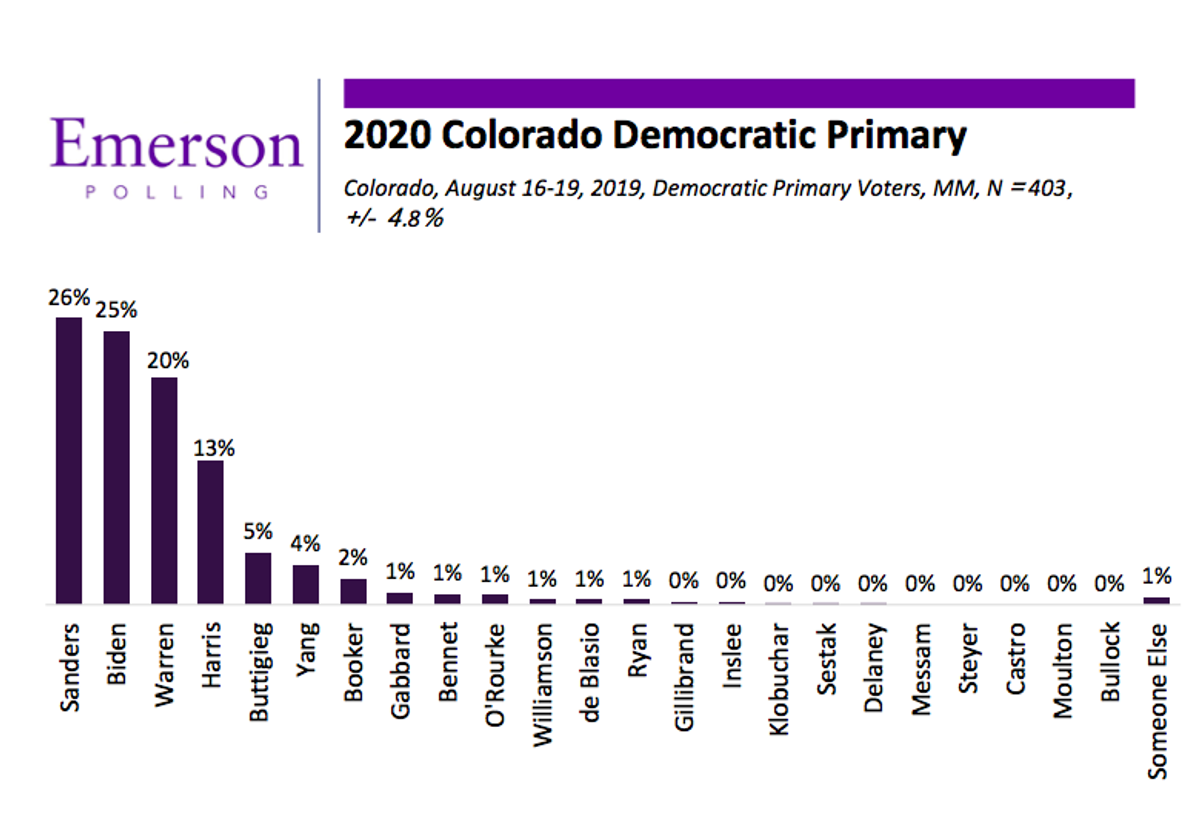 Sanders’ base of support is among 18-29 year olds where he takes 42% of the vote, and he also leads with 30-49 year olds with 34% of the vote but takes only about 12% of the vote from those over 50. Conversely, Biden leads with those over 65 with 43% of the vote while his numbers drop with the younger voters bottoming out at 18% of 18-29 year olds. Warren gets a more consistent percent of the vote from each age group. Spencer Kimball, Director of Emerson Polling notes, “the Colorado data is similar to other state and national polls where Sanders holds a base with the youth vote, Biden has his base with older voters and Warren holds equally strong across age groups. If either Sanders or Biden slip, Warren may be the beneficiary”.

For the first time in twenty years, Colorado will be holding a primary instead of their traditional caucus which has potential to impact the turnout model of the state. In 2016, Sanders won the state 59% to 40% over Hillary Clinton, but a look at potential new voters shows the top four candidates all popular and vying for new voters’ support. Of new voters who plan to vote in the primary, Harris receives the highest percentage (21%), followed by Sanders (20%), Warren (17%), and Biden (16%). Spencer Kimball, Director of Emerson Polling says that “Colorado will be interesting to watch in 2020 because of the change in their nominating rules, going from a caucus to a primary, should increase turnout from about 13% to perhaps as high as 50% and we will see which candidate is able to attract those new voters, so far they appear split among the top four candidates.” In 2016 Sanders won 11 of 18 caucuses but lost 30 of 41 primaries.

In the state, President Trump’s job approval is 54% disapproval / 39% approval. Trump’s approval with Republicans remains strong at 80%, his support is demonstrated in a potential primary match up against former MA Gov. Bill Weld where he leads 86% to 14% (n=339, +/- 5.3%). However, among Independents, Trump’s disapproval is at 57% and his approval is at 34%, contributing to his poor head to head performance against all of his top Democratic challengers. Currently, he is losing the state by larger margins against 4 of his 5 top Democratic challengers than in 2016 when Clinton won the state 48% to 43%. 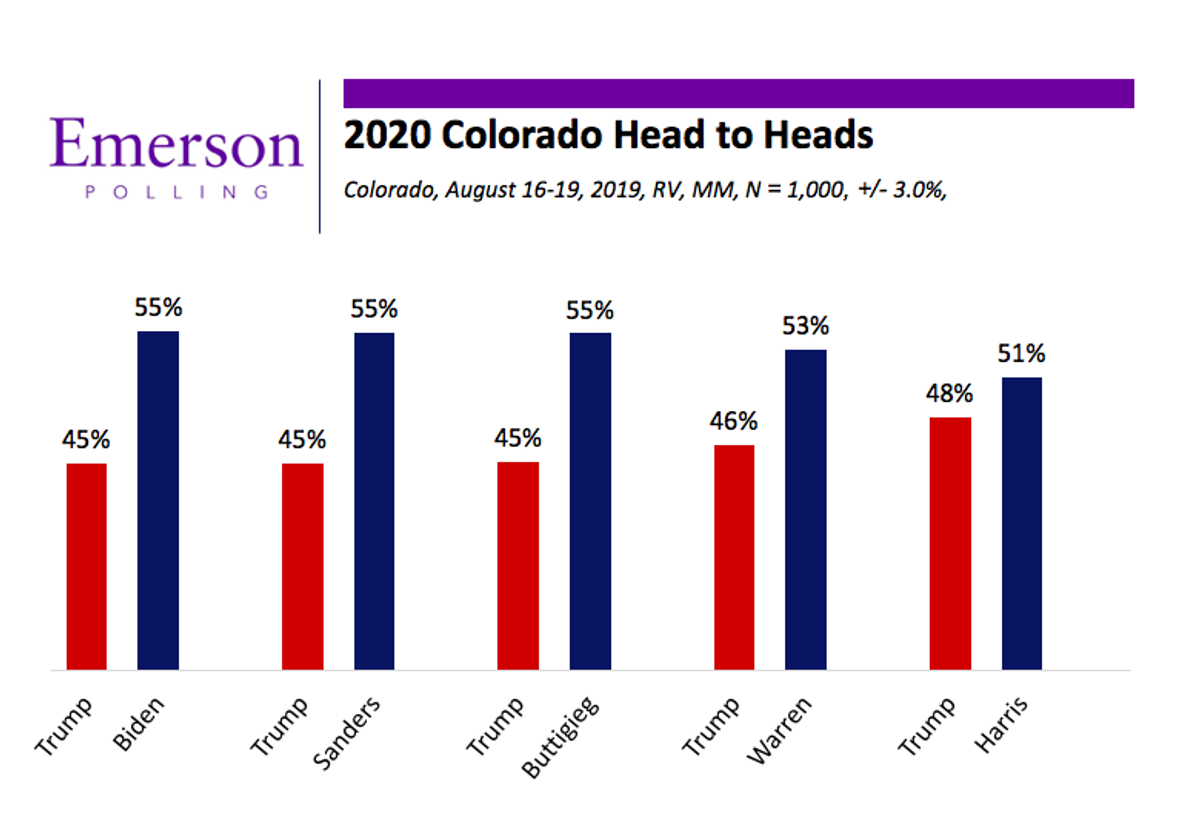 In a hypothetical Senate matchup between Sen. Cory Gardner and former Governor John Hickenlooper, Hickenlooper holds a strong lead with 53% to 40% for Gardner. 8% are undecided. The key to Hickenlooper’s lead is his strong performance among Independents, among whom he leads Gardner 55% to 34%.

The Colorado Emerson College poll was conducted August 16-19, 2019 under the Supervision of Emerson College Polling Director and Assistant Professor Spencer Kimball. The sample consisted of registered voters, n=1,000, with a Credibility Interval (CI) similar to a poll’s margin of error (MOE) of +/- 3 percentage points. The data was weighted by a 2016 voter model on race, age, gender, party affiliation, education and US congressional district. It is important to remember that subsets based on gender, age, party breakdown, ethnicity and region carry with them higher margins of error, as the sample size is reduced. Data was collected using both an Interactive Voice Response (IVR) system of landlines only (n=656) and an online panel provided by Amazon MTurk and Dynata (n=344). 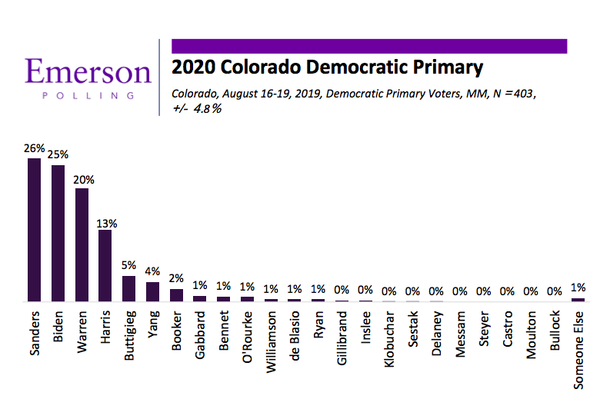 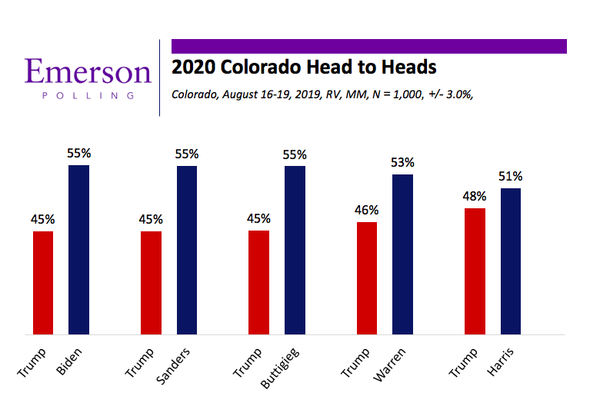