With less than two months until the California recall election, a new Emerson College/Nexstar Media poll shows voters are split on whether Governor Gavin Newsom should be recalled in September: 43% say they would vote to recall Newsom at this time, and 48% say they would vote to keep him in office. Nine percent (9%) of voters are undecided. These results were similar to the March CA Emerson/Nexstar poll, where 42% wanted to keep the Governor and 38% favored the recall. 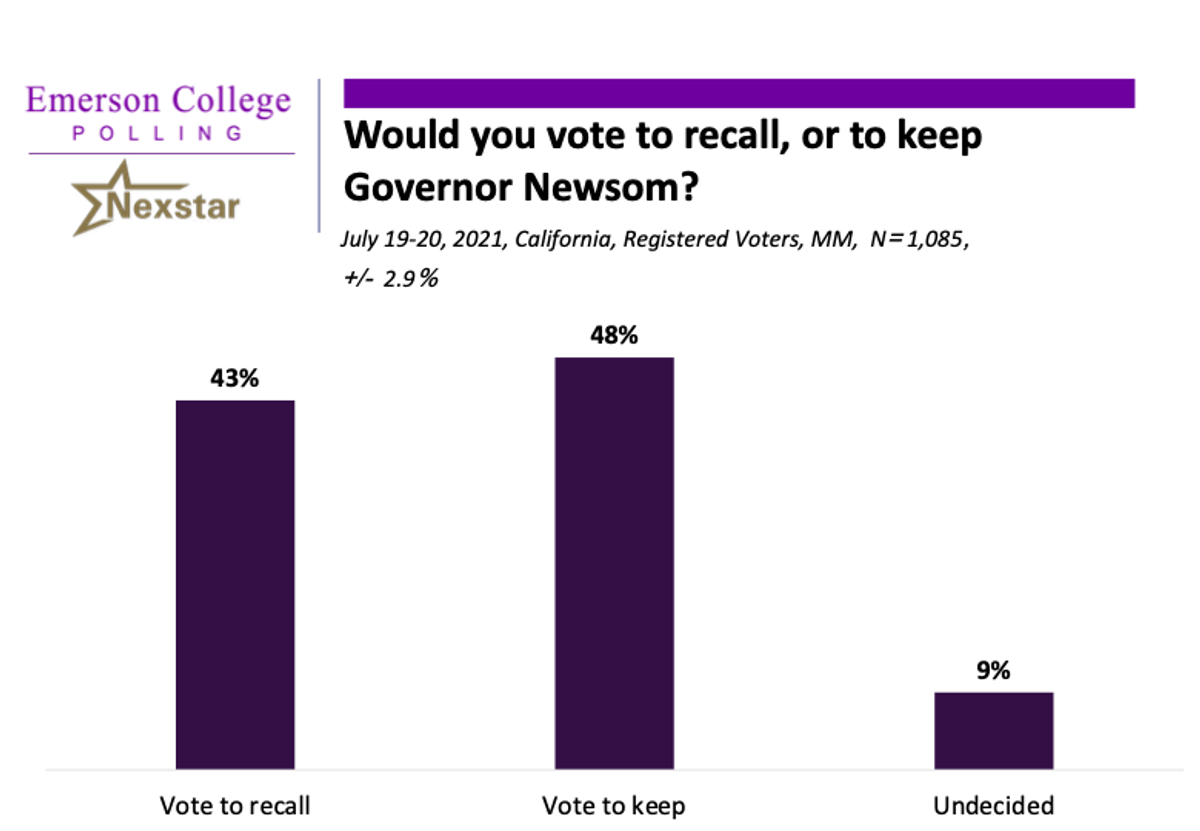 Support for keeping Newsom in office is highest among Democrats (75% to keep), Black Californians (70% to keep), and those with a college degree (56% to keep). Regionally, Newsom has the most support to stay in office among voters in the Bay Area (58% to keep), and Los Angeles (53% to keep).

On the question of who they would vote for if Newsom was recalled, a majority (53%) of voters are undecided on a candidate. Within the field of candidates that currently have support, conservative talk radio host Larry Elder leads at 16%, followed by businessman John Cox, at 6%, and former San Diego mayor Kevin Faulconer, at 6%. California State Assemblyman Kevin Kiley, and former Olympian and television personality Caitlyn Jenner are at 4% each. Social media influencer Kevin Paffrath is at 2%, with the remaining 8% of voters opting to vote for someone else. 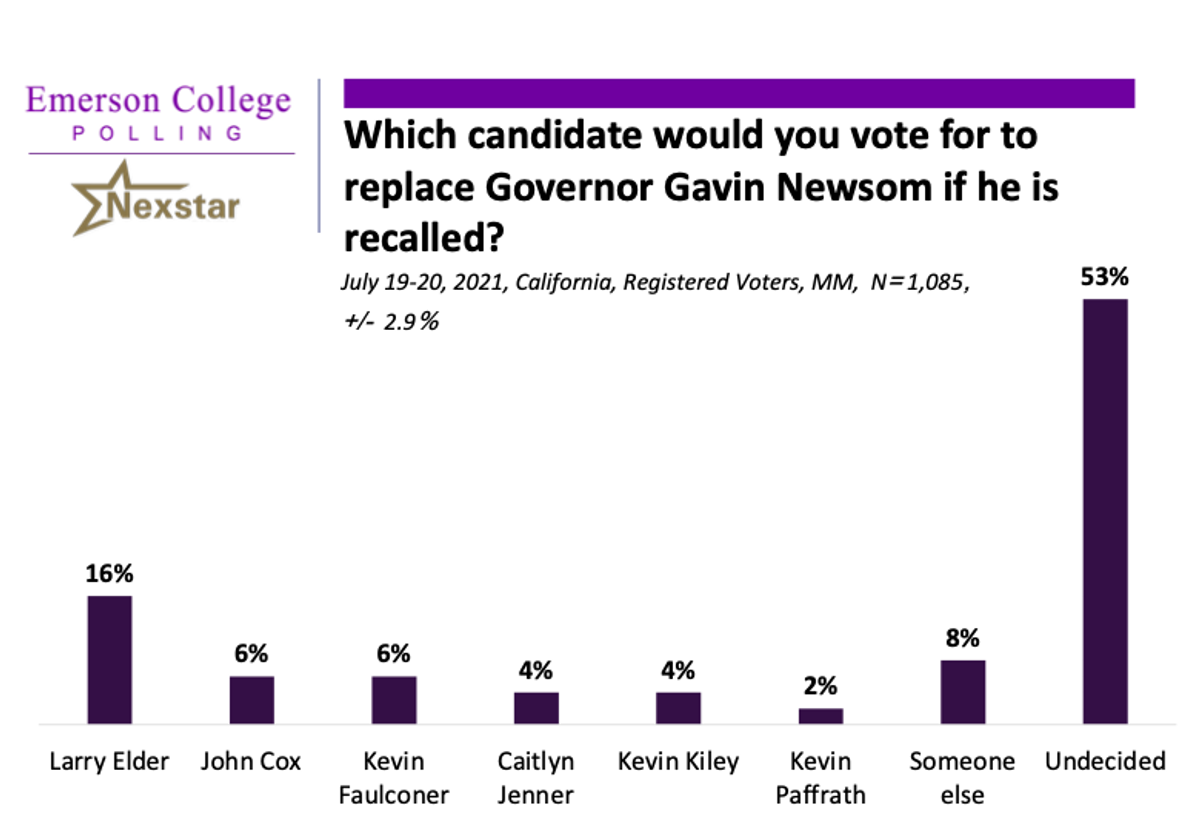 Even if Newsom survives the recall in September, the Governor faces trouble ahead;  a clear majority (58%) of voters said regardless of the recall, they believe it is time to elect a new Governor in the 2022 election. Forty-two percent (42%) of voters say they would vote to re-elect Newsom in 2022.

Governor Gavin Newsom’s general job approval among registered voters is at 49% approve, 42% disapprove, with 10% unsure. Newsom’s approval is underwater with both Independents (28% approval/58% disapproval) and Republicans (18% approval/77% disapproval), but is still high among Democrats in the state (79% approval/13% disapproval).

Voters were also asked to rate Newsom’s job performance as ‘excellent’, ‘good’, ‘fair’, or ‘poor’ on key issues facing California: Covid-19, droughts, wildfires, and homelessness. On each issue, a plurality of voters rated his performance as ‘poor’. 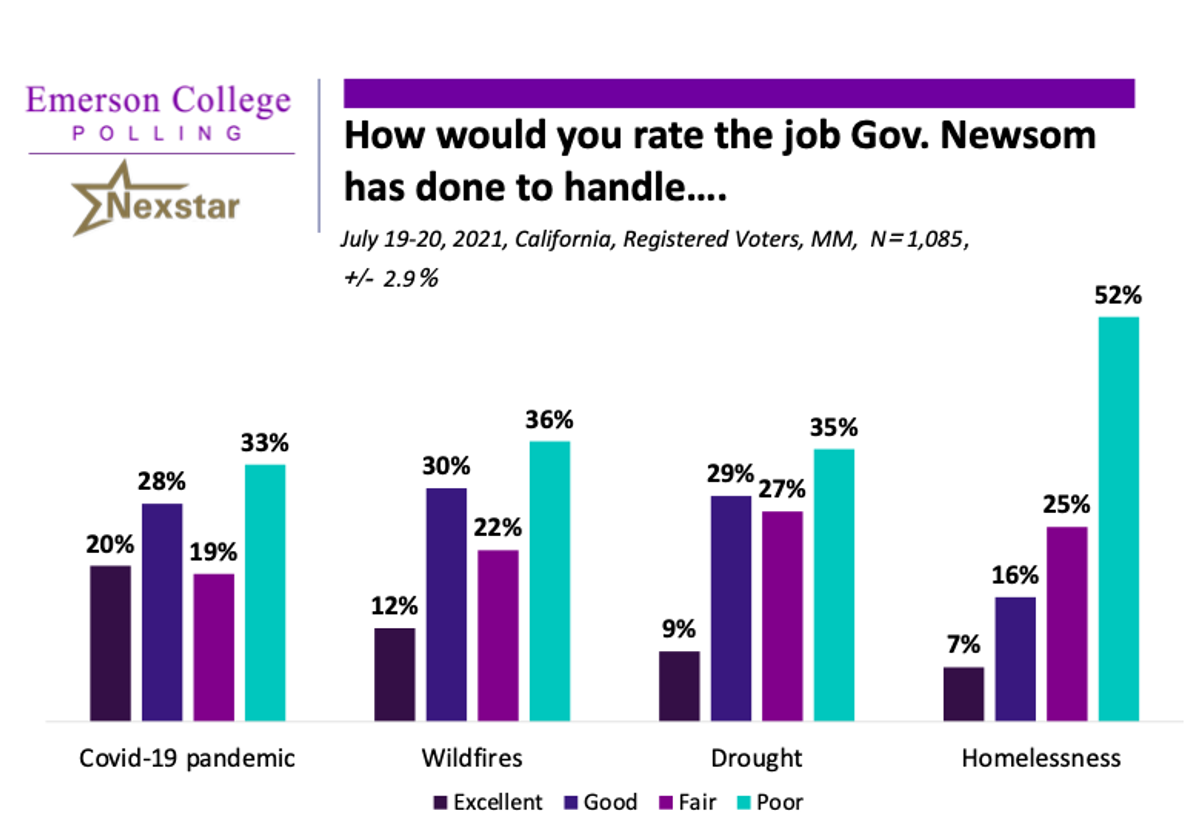 Homelessness is the issue where Newsom’s job performance is at its worst, with over half (52%) of voters giving him a rating of poor. This compares to 25% fair, 16% good, and only 7% excellent.

Covid-19 and Most Important Issue

A majority of voters (61%) are either very or somewhat concerned about the threat of the Delta variant of Covid-19, while 19% are not too concerned and 21% are not concerned at all.

Regarding masking, a plurality (37%) of California voters say they always wear their mask outside of the home, 22% wear it often, 22% wear it sometimes, and 19% never wear it.

Voters are split on returning to a statewide indoor mask mandate: 49% would support this measure, 39% would be opposed, and 12% are unsure.

A plurality (49%) of voters agree that large venues such as concert halls and stadiums should require proof of vaccination for entry, while 40% disagree and 11% are unsure. When asked about requiring proof of vaccination for entry into smaller shops, restaurants, and offices, a majority (51%) disagree with such a policy, while 35% agree and 14% are unsure.

Voters were even more split about requiring the Covid-19 vaccine for middle school and high school students over the age of 12:  51% agreeing the vaccine should be mandatory while 48% oppose such a requirement.

The California Emerson College/Nexstar Media Group poll was conducted July 19-20, 2021. The sample consisted of California registered voters, n=1,085, with a Credibility Interval (CI) similar to a poll’s margin of error (MOE) of +/- 2.9 percentage points. The data sets were weighted by gender, age, education, race, party affiliation, and region. It is important to remember that subsets based on gender, age, party breakdown, ethnicity, and region carry with them higher margins of error, as the sample size is reduced. Data was collected using a cellphone sample of SMS-to-web, and an online panel provided by Amazon MTurk. 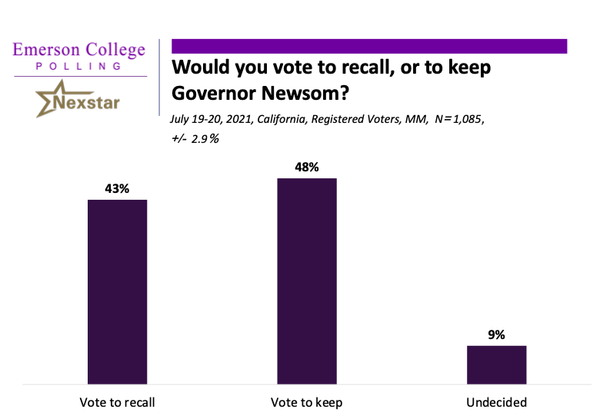 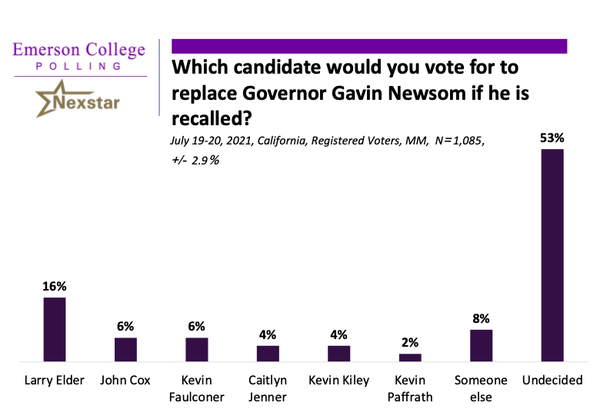 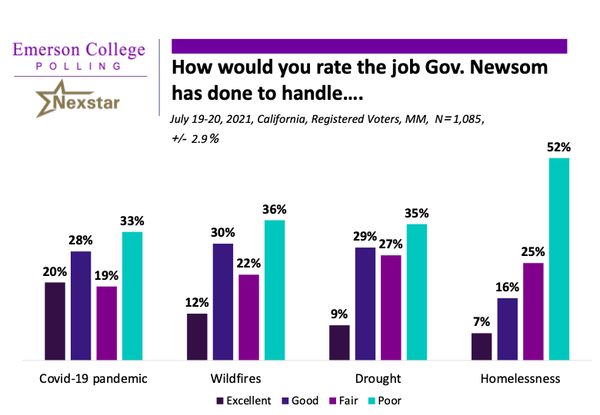