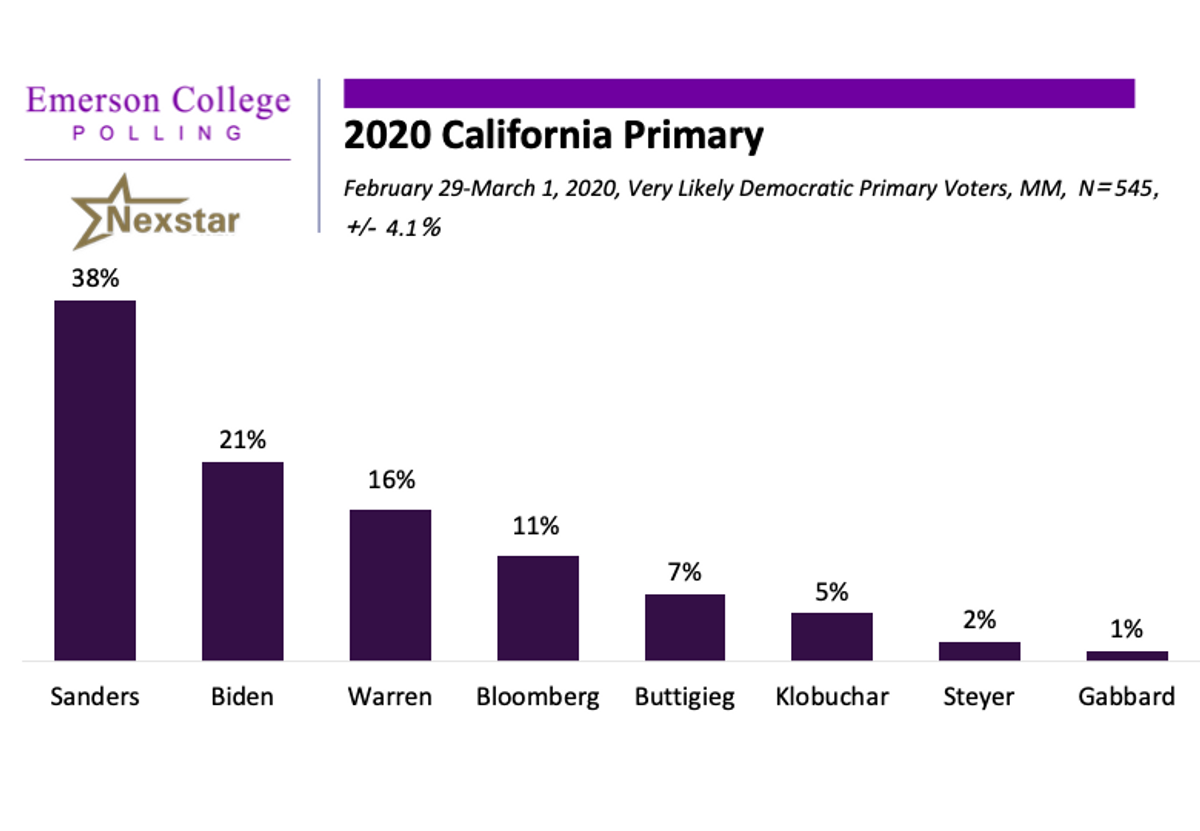 The race is closer among black voters, with 26% supporting Sanders, 24% supporting Biden, 19% supporting Bloomberg, and ten percent supporting each Warren and Buttigieg. Sanders is back up to 50% among Asian voters, followed by Elizabeth Warren with 23% and Biden with 17%. No other candidate has more than ten percent of the Asian vote.

Looking within ideology, Sanders has a commanding lead among “very liberal” voters at 49%. Following him among those voters is Warren at 32% and no other candidate reaches double digits with that group. Of “somewhat liberal” voters, Sanders leads with 44% followed by Warren and Biden at 16%, and Bloomberg at 12%. But, among “moderate” and “conservative” voters, Biden leads with 32%, followed by Sanders with 31%, and Bloomberg with 13%.

Some voters are still not decided on who to support with the primary just two days away. Among respondents who have not voted early, 37% said they could still change their minds in who to support while 63% said they are definitely voting for their preferred candidate.

Respondents were asked to choose the candidate that they believe has the best healthcare policy; a plurality (40%) chose Sanders. Biden came in second with 20%, followed by Warren with 16%. No other candidate broke into double digits. 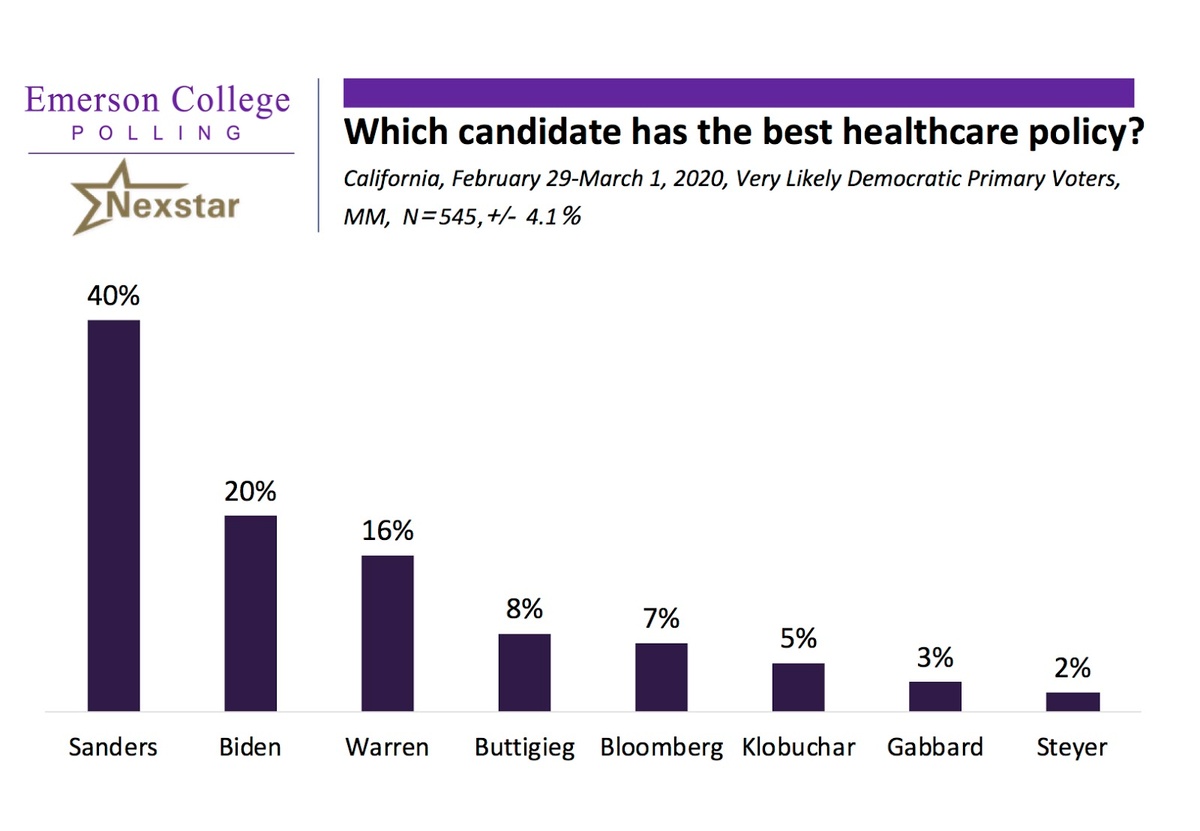 When asked to select which is the single most important issue in deciding their vote for president, healthcare led with 25%, followed by social issues with 22%, the economy with 21%, and the environment with 9%.

Voters were split on the issue of if big tech companies like Apple, Facebook, and Google should be broken up; 34% said yes, 34% said no, and 33% were unsure.

As California has been experiencing increased droughts, wildfires, and worries over rising sea levels alongside climate change, voters were asked if they would be willing to pay more in taxes to help respond to these issues. A plurality, 47%, said they are willing to pay more, 33% are not willing, and 20% are unsure.

California is also in the midst of a homelessness crisis, with approximately 150,000 people living on the streets. When asked if mandatory housing and mental health services should be implemented across the state for homeless people, a majority (63%) said yes, 16% said no, and 22% were unsure.

When asked if they believed the United States is prepared to control the increased risk of the Coronavirus, a majority, 53%, responded no, 30% said yes, and 17% were unsure.

A strong majority, 83%, believe that California police officers should be wearing body cameras at all times while on-duty.

The California Emerson College/Nexstar poll was conducted February 29-March 1, 2020. The sample for the Democratic Primary consisted of registered Democratic and Independent very likely voters, n=545, with a Credibility Interval (CI) similar to a poll’s margin of error (MOE) of +/- 4.1 percentage points. The data sets were weighted based on gender, age, ethnicity, education, region, and mode based on 2016 turnout model. It is important to remember that subsets based on gender, age, party breakdown, ethnicity and region carry with them higher margins of error, as the sample size is reduced. Data was collected using an Interactive Voice Response (IVR) system of landlines only (n=271) and an online panel provided by MTurk (n=274). 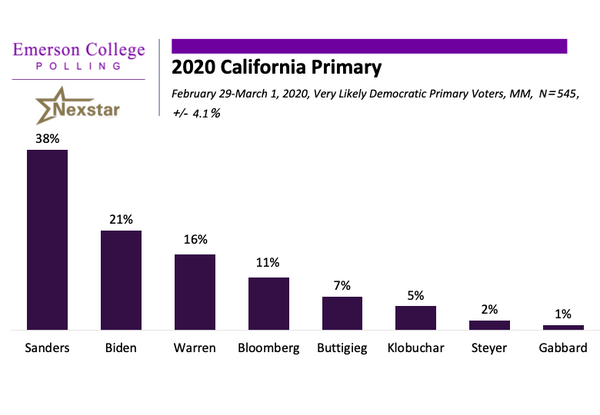 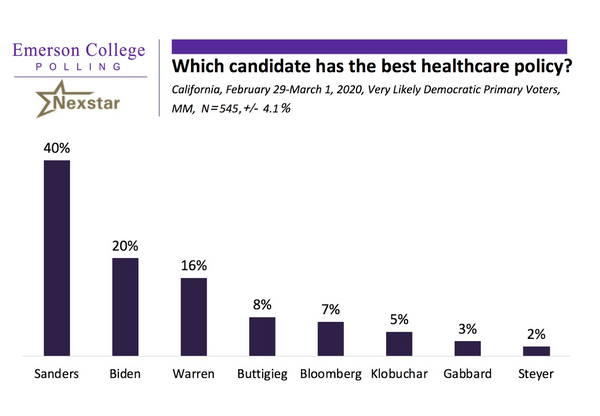