The California Democratic Primary is shaping up into a three-way race; former Vice President Joe Biden is tied with Sen. Bernie Sanders at 26% and Sen. Elizabeth Warren is close behind at 20%. A significant drop is seen between this tier and the next group of candidates; entrepreneur Andrew Yang is in fourth at 7%, followed by Sen. Kamala Harris at 6%, former Rep. Beto O’Rourke at 5% and Mayor Pete Buttigieg at 4%. Every other candidate is at 2% or less (MM, RV, n=424, +/- 4.7%, 9/13-16). 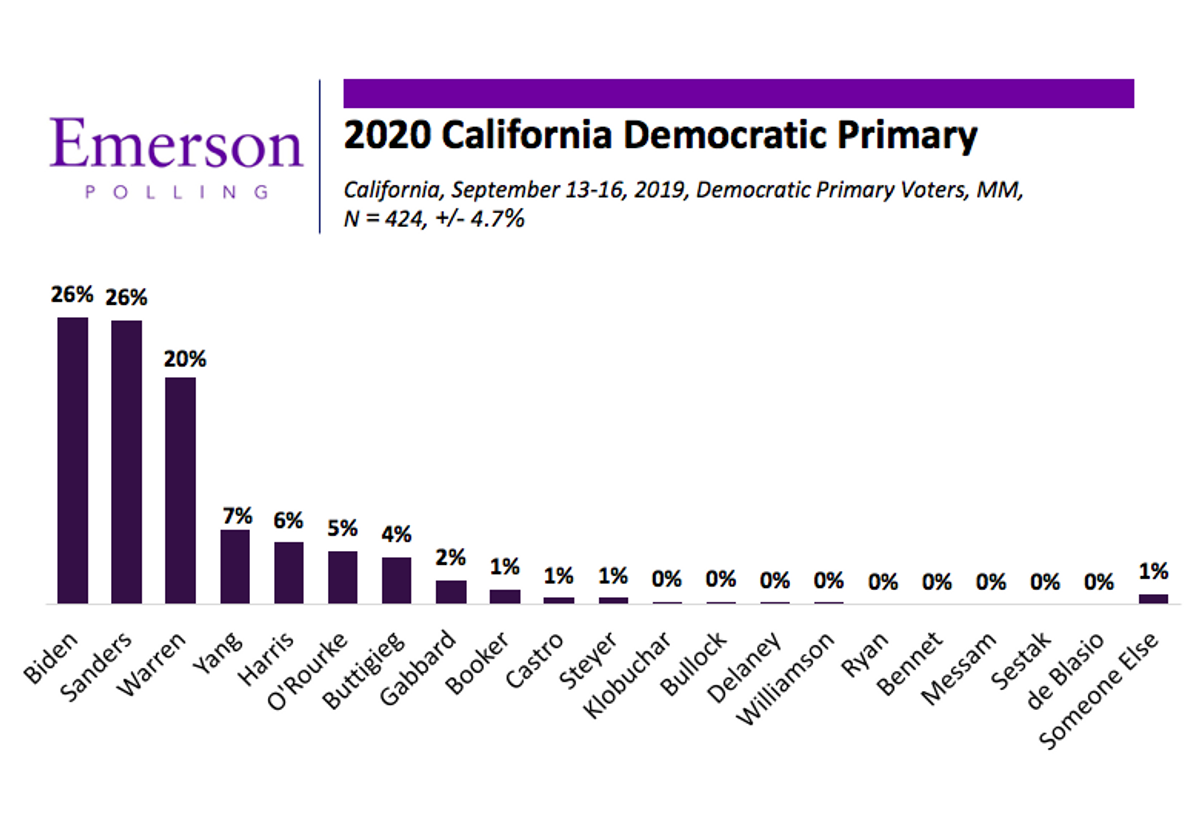 The California Democratic Primary will be held on Super Tuesday and Emerson Polling Director Spencer Kimball’s notes that at this point “Senator Kamala Harris is in trouble in her home state. If she is unable to gain momentum in Iowa or New Hampshire, come Super Tuesday she might have a similar fate to Sen. Marco Rubio in 2016, when he was unable to win his home state of Florida and dropped out of the race.”

Driving support for Sanders is younger voters under the age of 50. He leads those voters with 34% of their support, followed by Warren at 18%, Biden at 16% and Yang at 11%. Sanders also has strong support from the Hispanic population of California, leading that group with 36%, followed by Biden with 23%, Warren with 19% and Buttigieg with 7%.

Among white voters, Warren leads with 29%, followed by Sanders with 20%, Biden with 18% and O’Rourke with 9%. Biden has an enormous lead among African-Americans, as he garners 59% support. No other candidate is within 40 points of Biden among that group.

Warren’s support is also disproportionately from voters who have at least some college education, as she only receives 1% support from those who have a high school degree or less.

In a potential Republican Primary, Trump wins with 86% of the vote followed by former Rep. Mark Sanford (SC) at 6%, former Rep. Joe Walsh (IL) at 4% and former Governor Bill Weld (MA) also at 4%.

In potential head to head matchups against his top Democratic challengers, Trump trails by significant amounts against all of them. Biden appears to be his strongest opponent, leading the President 64% to 36%. Sanders leads the President 63% to 38% while Harris and Warren each lead by 22 points, 61% to 39%. 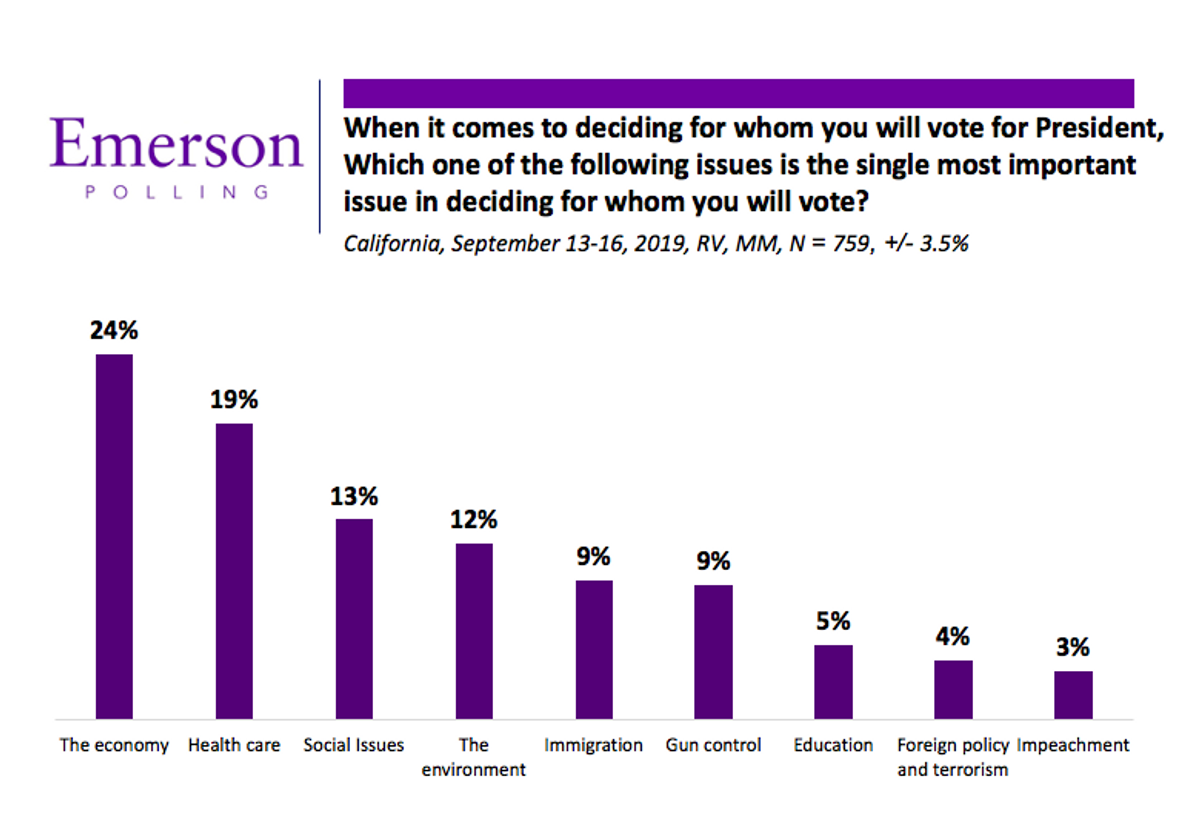 65% of CA voters would prefer Nancy Pelosi over Alexandria Ocasio-Cortez to be Speaker of the House. Among registered Democrats, Pelosi’s support drops to 59% while among Republicans her support grows to 77%. 66% of Independents prefer Pelosi over Ocasio-Cortez.

A majority of voters, 57%, support the removal of prior marijuana convictions from criminal records while 22% oppose and 21% are undecided. 67% of Democrats support this measure and 57% of Independents support it, while only 37% of Republicans support it.

A majority of voters, 50%, support AB 5 which gives gig workers for companies like Uber and Lyft to be given full employee status, meaning they would be entitled to holiday and sick pay. 24% of voters oppose the bill and 27% are undecided. There is also a partisan divide on this issue, as 60% of Democrats are in support opposed to just 33% of Republicans and 47% of Independents.

A plurality of voters, 44%, support SB206, also known as the Fair to Play Act, which would allow college athletes to profit off of their own name, image or likeness. 23% oppose the legislation and 33% were unsure. 51% of Democrats are in support, compared to 30% of Republicans and 44% of Independents.

The California Emerson College poll was conducted September 13-16, 2019 under the Supervision of Emerson Polling Director Assistant Professor Spencer Kimball. The sample consisted of registered voters, n=830, with a Credibility Interval (CI) similar to a poll’s margin of error (MOE) of +/- 3.3 percentage points. The data was weighted by gender, age, education, party, ethnicity and mode based on 2016 turnout modeling. It is important to remember that subsets based on gender, age, party breakdown, ethnicity and region carry with them higher margins of error, as the sample size is reduced. Data was collected using both an Interactive Voice Response (IVR) system of landlines only (n=498) and an online panel provided by Amazon Turk (n=332). 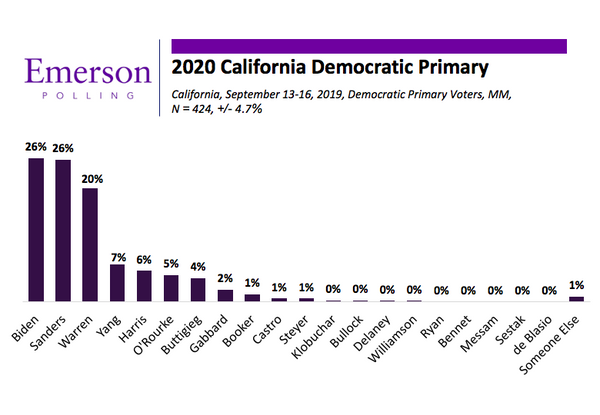 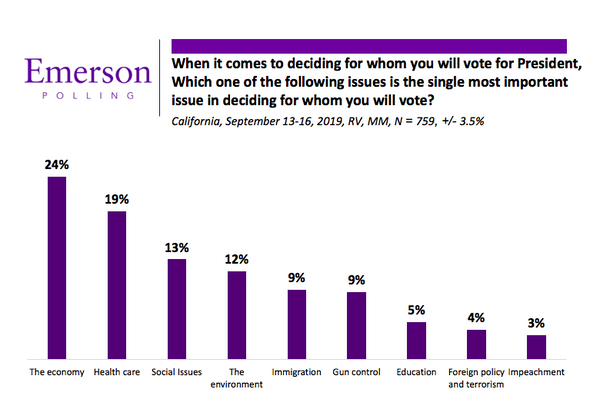