The latest Emerson College/WIVB poll finds incumbent Mayor Byron Brown at 54%, 18 points ahead of India Walton, the Democratic nominee, who is at 36%. Brown is up 4 points from August. Six percent (6%) of voters are undecided, and 4% plan to vote for someone else. 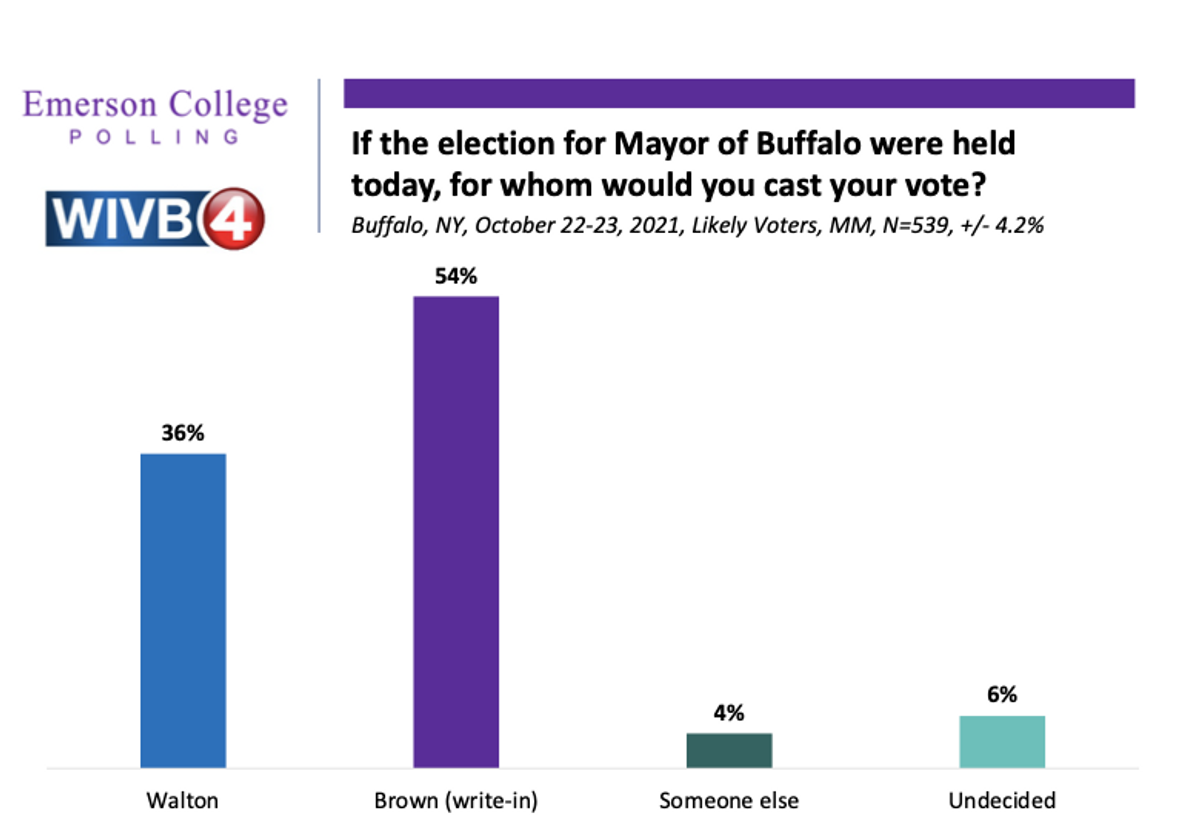 When presented with the question of who they were planning to vote for, respondents were all given Walton’s name, an undecided option, and an option for “someone else”. Of those who responded “someone else”, they were required to either write-in Brown’s name (SMS-to-web), or speak it into the phone (IVR).

Democratic voters are split between planning to vote for Brown (50%) or Walton (41%), despite Walton winning the primary by 7 percentage points. This suggests that Brown may have a base that did not come out to vote in the primary, but is now tuning in for the general election. Of our surveyed voters, 43% did not vote in the primary.

Voters were asked about what issues they believe should be the next mayor’s first priority, regardless of who they support. Twenty-one percent (21%) want a focus on crime, 16% on education, and 16% on development. Voters were also asked about housing (11%), police reform (10%), jobs (9%), homelessness (4%), healthcare (3%), and Covid-19 (2%), with 9% of voters supporting something else.

Voters are split on whether they would elect someone who identifies as a Democratic socialist into office, with 38% saying yes, 45% saying no, and 17% unsure or no opinion.

A plurality (46%) of voters support term limits for Buffalo mayor, with 34% in opposition, and 20% unsure.

When asked about the Buffalo Police Department, a plurality of voters (42%) believe the budget should increase, while 31% say the budget should stay the same, 19% say it should be decreased, and 8% are unsure.

A plurality (47%) support gradually redirecting police funding toward increasing the number of social workers, drug counselors and mental health experts responsible for responding to non-violent emergencies. Thirty-six percent (36%) are opposed, and 16% are unsure.

Voters support building a new Buffalo Bills stadium, at 63%, while 23% believe the current stadium should be renovated, and 14% say that nothing should be done, even if that means the Bills leave Buffalo. Regarding the potential location of a new stadium, the majority (69%) say it should be built in the city of Buffalo. Twenty-six percent (26%) want the new stadium to be built outside of Buffalo, in Orchard Park, and 5% say it should be built in another location.

The Buffalo Emerson College/WIVB-4 poll was conducted October 22-23, 2021. The sample consisted of Buffalo likely voters, n=539, with a margin of error (MOE) of +/- 4.2 percentage points. The data sets were weighted by gender, age, education, race, and party affiliation. It is important to remember that subsets based on gender, age, party breakdown, ethnicity, and region carry with them higher margins of error, as the sample size is reduced. Data was collected via a cellphone sample using SMS-to-web, and a landline sample using IVR. 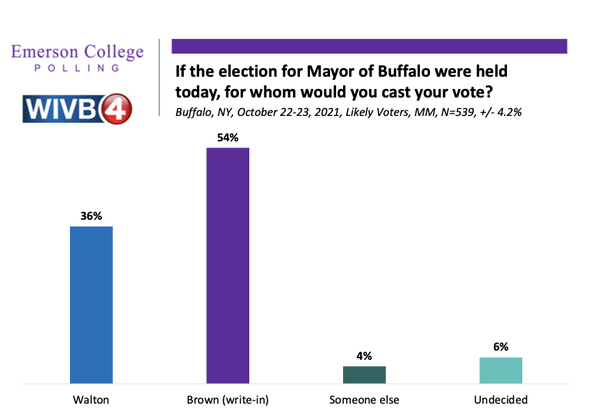