With under five months until election day, the race for Mayor of Boston is wide open as a plurality of voters (36%) are still undecided on who they plan to support. Boston City Councilor At-Large Michelle Wu has 16% of the vote, acting Mayor Kim Janey is at 15%, Boston City Councilor At-Large Annissa Essaibi George is at 15% and District 4 Councilor Andrea Campbell is at 11%. Candidates with single-digit support include State Rep. Jon Santiago (4%), fmr. city economic development chief John Barros (3%), and Michael Bianchi (1%). 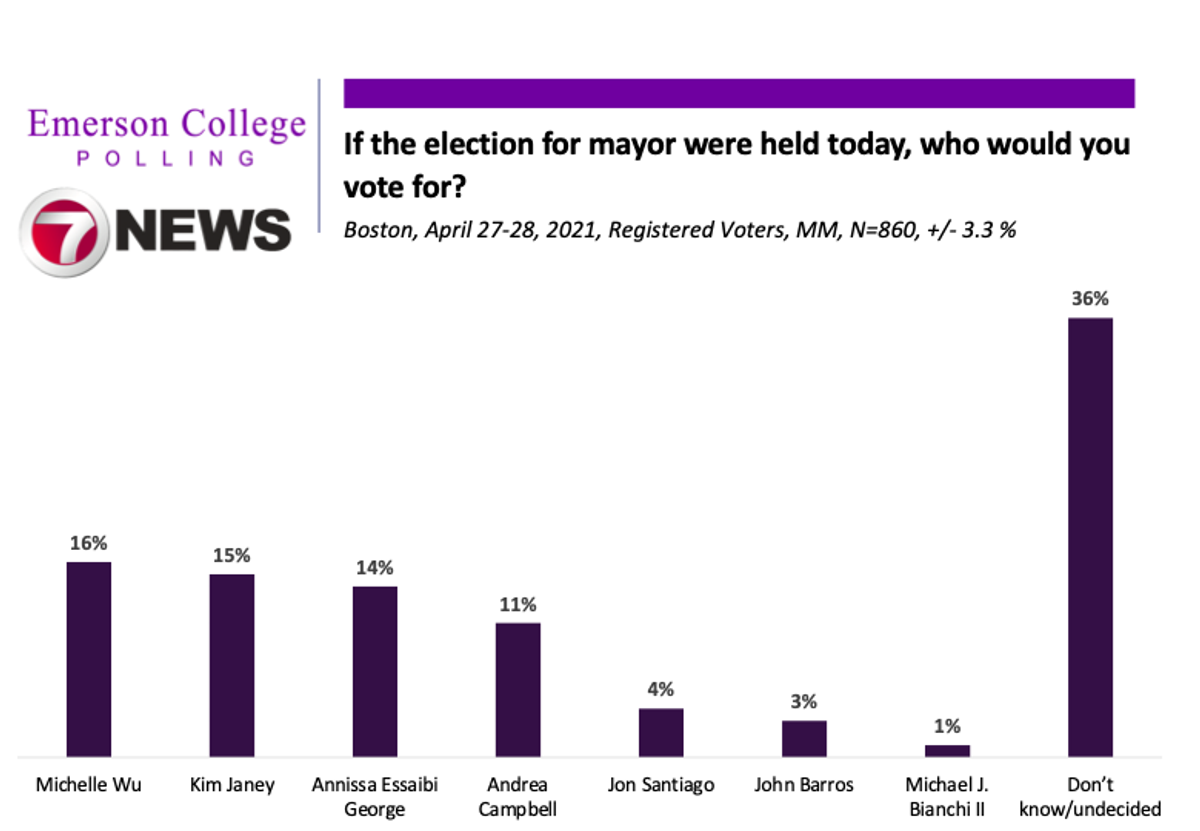 The data also suggests candidates are beginning to shape their bases of support. Wu leads among Asian voters (29%) and those with a college degree or greater (20%). Janey leads African American voters (26%), while Essaibi George leads among white voters (19%). Campbell leads among younger voters aged 18-29, with 31% of their support.

Women appear more hesitant to take the vaccine than men, with 20% of women saying won’t get vaccinated as compared to 9% of males. Also concerning is about 1 in 3 African Americans say they don’t plan on being vaccinated.

While just over half of respondents (56%) reported eating inside a restaurant during the month of April, the data predicts an increase in indoor dining in May. Sixty-three percent (63%) plan on going out to eat at some point in the next month. This question varies by age: 82% of those 18-29 reported eating out over the past month, compared to 61% of 30-44-year-olds, 54% of 45-64-year-olds, and only 31% of those over 65. However, older people appear to have increasing confidence in eating out in the next month, 43% plan to go out and dine in May.

At a nearly 2:1 ratio (64% say it is at least somewhat serious/34% say not that or not at all serious), people in the city think systemic racism is a problem in Boston, and similar margins view the phrase Black Lives Matter positively (64% to 31%) and the Boston Police Department positively at 65% and 29% negative.

When asked about reallocating funding from police departments to spend that money on social services instead, voters were split, with 40% in favor and 40% opposed to the idea.

Overall, 38% of voters think it is harder to achieve the American Dream in Boston. Twenty-one percent (21%) said it was easier in Boston, and 30% thought it was about the same. Eleven percent (11%) were unsure on this issue.

When asked which Boston sports team will win the next championship in their respective sport, there was no consensus; 17% said the Red Sox and Bruins each, respectively, 15% went with the Celtics, and 7% said the Patriots. Forty-five percent (45%) had no opinion on the issue.

The Boston Mayoral poll was conducted April 27-28, 2021. The sample consisted of Boston registered voters, n=860, with a Credibility Interval (CI) similar to a poll’s margin of error (MOE) of +/- 3.3 percentage points. The data sets were weighted by age, education, race, party affiliation, and region based on a 2021 turnout model. It is important to remember that subsets based on gender, age, party breakdown, ethnicity, and region carry with them higher margins of error, as the sample size is reduced. Data was collected using a cellphone sample of SMS-to-web and an IVR system of landlines. 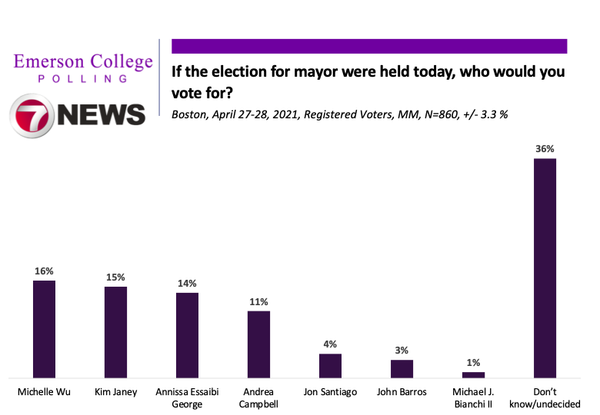