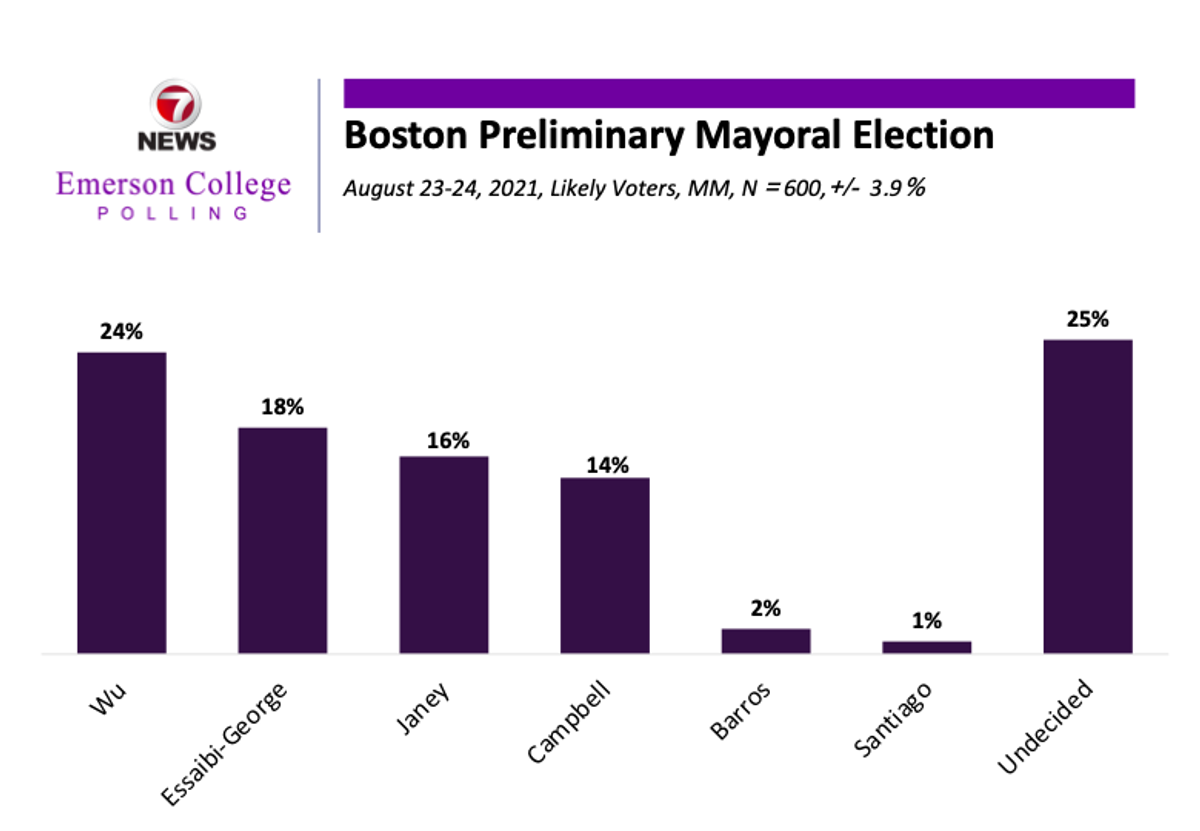 Since the last Emerson/7News poll in April, Wu has gained the most support, 8%, while Essaibi-George has gained 4%, Campbell has gained 3%, and Janey has gained 1%. The percentage of undecided voters has gone down 11 points, from 36% to 25%.

Wu has a sizable lead among the field with somewhat likely voters, where 35% plan to vote for her. However, among very likely voters, the race is tighter: 22% support Wu, 21% support Essaibi-George, 17% support Janey, and 15% support Campbell.

When asked about the most important issue when deciding for whom to vote for mayor, voters were split between housing with 19%, education with 16%, crime with 12% and healthcare with 10%. Other deciding issues included jobs with 8%, COVID-19 with 6%, and police reform, transportation, and the environment with 5% respectively. Thirteen percent cited something else. 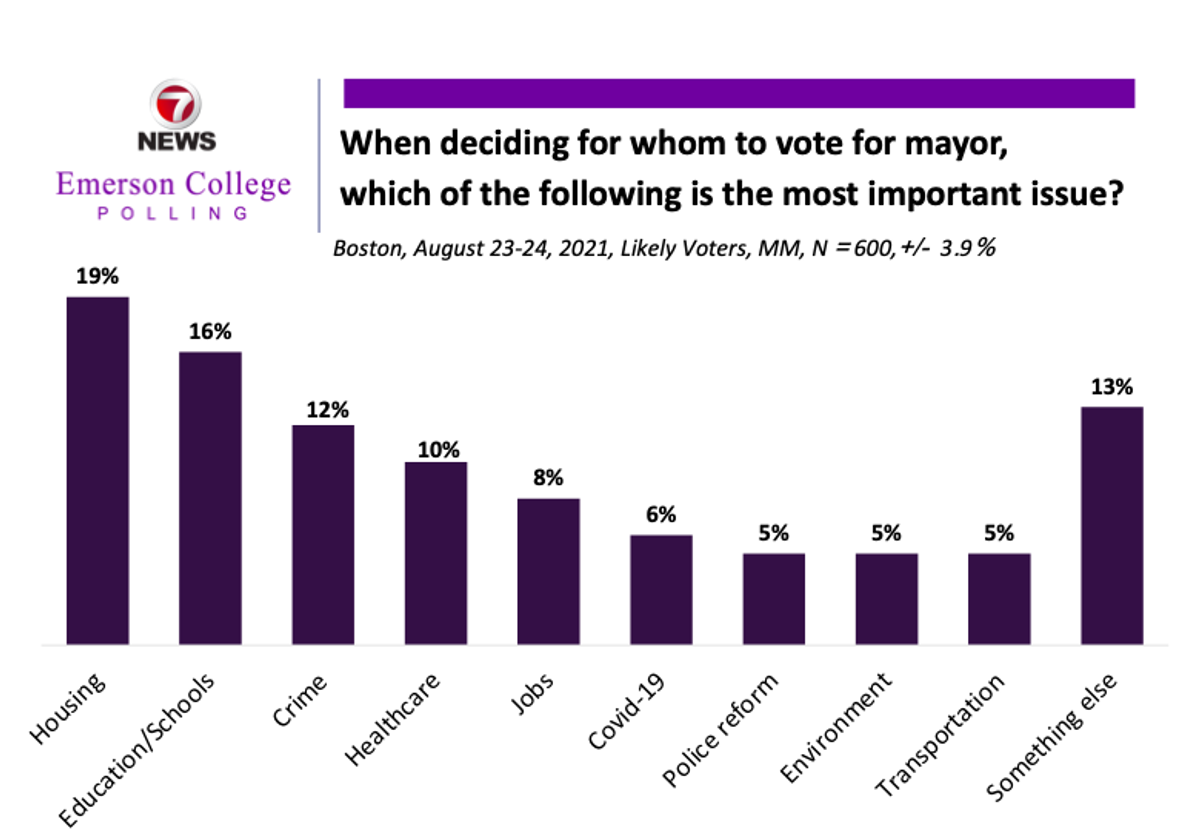 Housing ranks as the top issue among pluralities of those who support Janey (32%), Wu (23%), and Campbell (34%), whereas the plurality (27%) of those who plan to support Essaibi-George say crime is the most important issue when deciding for whom to vote.

The majority (56%) of Boston voters are very concerned about the threat of the Delta variant of COVID-19. An additional 30% said they were somewhat concerned, while 9% were not too concerned and just 5% were not at all concerned.

The vast majority (71%) of Boston voters agree that large public venues such as concert halls and stadiums should require proof of vaccination. Sixteen percent (16%) disagree, while 13% are unsure. The same size majority (71%) also agree that businesses have the right to require that their employees get vaccinated; 16% disagree and 14% are unsure. Sixty-three percent (63%) of voters agree that shops, restaurants, and offices should require proof of vaccination; 21% disagree and 16% are unsure.

The Boston Mayoral poll was conducted August 23-24, 2021. The sample consisted of Boston likely voters, n=600, with a Credibility Interval (CI) similar to a poll’s margin of error (MOE) of +/- 3.9 percentage points. The data sets were weighted by age, gender, education, race, party affiliation, 2017 vote, and region based on a 2021 turnout model. It is important to remember that subsets based on gender, age, party breakdown, ethnicity, and region carry with them higher margins of error, as the sample size is reduced. Data was collected using a cellphone sample of SMS-to-web, an IVR system of landlines, and an online panel. 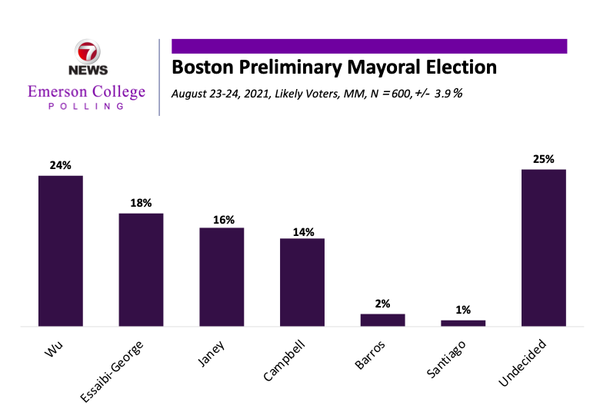 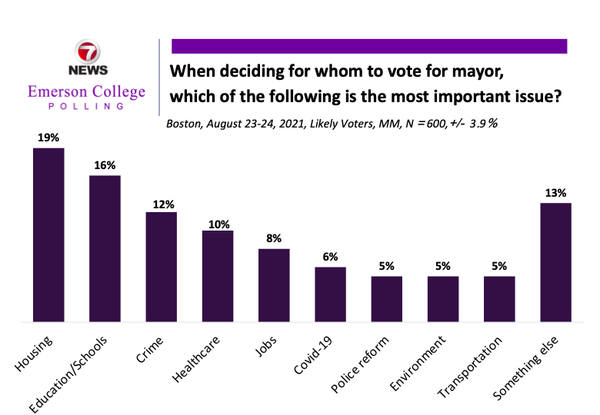