Before the Economy Reopens, New Yorkers Need More Testing and Assurances of Safety in the Workplace - CUNY SPH COVID-19 Survey

In the latest CUNY SPH COVID-19 tracking survey, New Yorkers gave convincing evidence that the city is not yet testing enough people and set high expectations for the safety measures they feel are necessary for them to return to work outside their homes. They are also uncertain about reopening public schools, colleges or universities in the fall. These are the major findings of the ninth city and statewide tracking survey from the CUNY Graduate School of Public Health & Health Policy (CUNY SPH), conducted May 15-17.

Almost a quarter (23%) of New York residents reported that one or more persons in their household has been sick with fever or symptoms consistent with COVID-19 since the coronavirus struck, but only half of those people were tested and more than three quarters of them tested positive for COVID-19.

There were stark differences based on race and ethnicity: one or more people were sick at home in 36% of Hispanic/Latinx households compared to 23% of Caucasian, 13% African American and 12% Asian ones. Of those who were tested for coronavirus, the highest percentage of people testing positive were Hispanic/Latinx (a startling 90%), followed by African Americans (65%), Caucasians (58%) and Asians (50%).

“These results indicate that at present we are still testing only the sickest New Yorkers,” said Dr. Ayman El-Mohandes, Dean of CUNY SPH. “If our goal is to reopen the city safely, most of those tested should be testing negative, which would mean that the spread of the virus is on the decline. We cannot open up until we ramp up our testing of people without symptoms, and conduct thorough follow-up contact tracing.”

Despite the decline in confirmed cases and hospitalizations in the city, New Yorkers’ concerns about the virus remain high. Just more than half (51%) of residents believe that they are at high or very high risk of contracting COVID-19. Almost seven out of ten (69%) are either opposed to or uncertain about reopening public schools in the fall.

Before the virus struck, 26% of employed New Yorkers were working from home. That number has shot up to 70% since the epidemic, and 40% of people who are currently working from home say they would prefer to continue doing so for the foreseeable future. The majority of respondents working from home now are Asian (54%) or Caucasian (51%) compared to African American (35%) and Hispanic/Latinx (23%). Working at home also correlates with educational level. Of those who have undergraduate or post-graduate degrees, more than 60% are working from home, compared to 30% with some college and 22% with high school educations.

When this subgroup was asked why they would not want to return to work outside the home, their primary concern (76%) was fear of bringing the virus home to their families, while 69% reported anxiety about using public transportation like buses and subways. A similar number (68%) said they feared getting sick themselves.

The survey also asked all respondents what precautions they felt needed to be in place to make them feel safer at work. The greatest number (84%) said that the availability of a vaccine or medicine against coronavirus or regular sanitization of the workplace would make them more confident, followed closely (82%) by requiring that face masks be worn at work at all times. Further preferences for workplace precautions were also favored by substantial majorities:

79% wanted people who enter building/workplace to report any symptoms

Many New Yorkers are uncertain about their future work. More than one in five (21%) believe there will no longer be a demand for their product or service when the economy reopens. About one in four who lost their jobs or were furloughed as a result of the epidemic plan to change their career path.

Of the 22% of New Yorkers who reported being furloughed or laid off, three in five (61%) said they had filed applications for unemployment benefits. Of those that applied, half (50%) are still waiting for their first check, 41% have received benefits and 9% were rejected.

Seventeen percent (17%) of our respondents classified themselves as self-employed or small business owners. Of those, 42% report applying for an SBA Economic Injury Disaster Loan or Paycheck Protection Program. Nearly everyone that applied was accepted, and two-thirds (67%) said they had received their loans. An additional 16% reported that they received their loans but will return the money, since they were unable to meet the conditions. A further 16% are waiting to hear the status of their applications.

The complete survey results and related commentary can be found at https://sph.cuny.edu/research/covid-19-tracking-survey/week-10 and JHC Impact, an initiative of the Journal of Health Communication: International Perspectives. 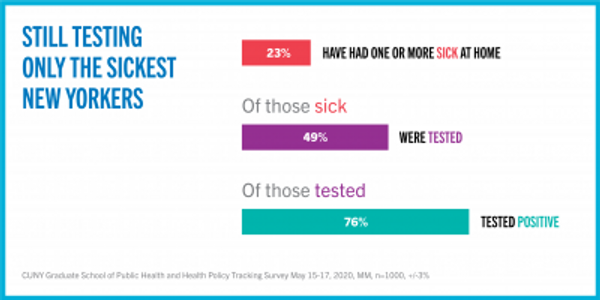