In the race to fill the open seat left by retiring Senator Richard Shelby (R), a new Emerson College Polling/The Hill poll finds Mike Durant leading the Republican primary with 33%, followed by Katie Britt with 23%, and Mo Brooks with 12%. No other candidate reaches double digits. Twenty-six percent (26%) are undecided. 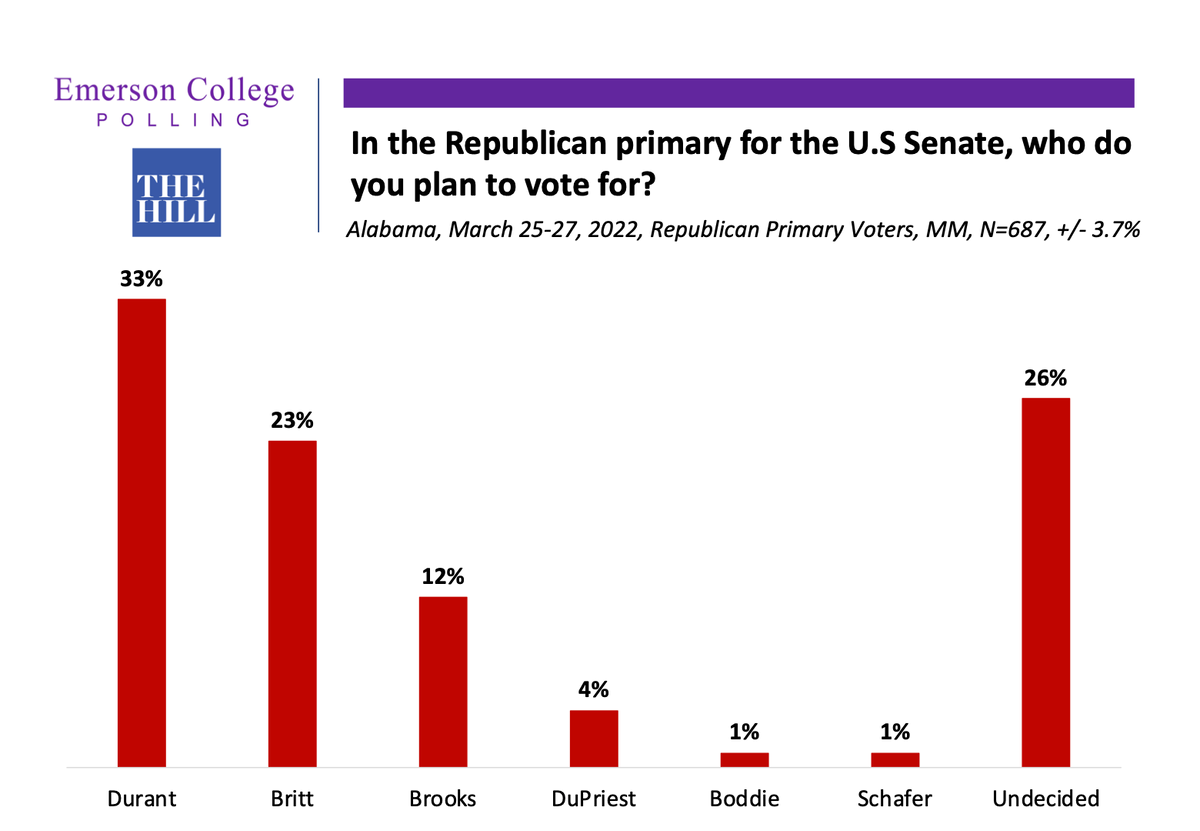 Spencer Kimball, Executive Director of Emerson College Polling noted, “while Durant holds a lead over Britt and Brooks in the primary, he is shy of the necessary 50% to avoid a runoff in June.” Kimball added, “the majority (52%) of Republican primary voters say Donald Trump’s endorsement makes them more likely to support a candidate. Senator Shelby’s endorsement holds less weight; 46% say it makes no difference to their vote.”

Kimball continued, “Whether Durant or Britt clinches the nomination might depend on who former President Trump chooses to endorse. Among the 26% of Republican primary voters who are undecided, 60% are more likely to vote for a candidate if Trump endorses them.”

Fifty-two percent (52%) of Alabama primary voters approve of the job Kay Ivey is doing as governor, while 33% disapprove. Ivey holds 48% of support in the Republican gubernatorial primary, followed by Tim James with 11% and Lynda Blanchard with 8%. Twenty-two percent 22% of Republican voters are undecided.

Kimball said, “While Ivy is at 48% in the primary ballot test, she has a 64% approval rating among Republican primary voters, which might allow her to reach 50% to avoid a run-off.”

Kimball continued, “The data suggests that party affiliation is driving the type of candidate each party would like to see in office; Democrats looking for someone with years of political experience while Republicans are looking for a political outsider”

A plurality (47%) of Alabama primary voters do not think marijuana should be legal for recreational purposes in Alabama, while 42% think it should be legal.

Voters were asked if they support or oppose the “Alabama Heartbeat Act,” bill that would prohibit medical providers from performing an abortion once a heartbeat is detected, 75% strongly (55%) or somewhat (20%) support the bill, while 25% somewhat (10%) or strongly (15%) oppose the bill. 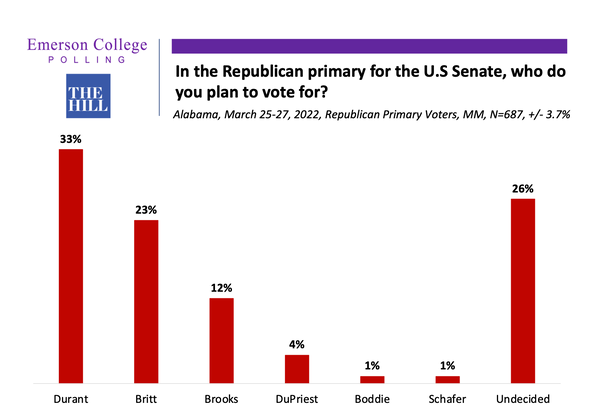