2020 Texas: Biden and Beto in Dead Heat in Democratic Primary.

A new Emerson Poll of Democratic Primary voters in Texas finds former Vice President Joe Biden at 23% and former Texas U.S. Senate candidate Beto O’Rourke at 22%. Vermont Senator Bernie Sanders was the only other candidate to clear double digits, polling third at 17%. Mayor Pete Buttigieg at 8% and Senator Elizabeth Warren at 7% are ahead of former HUD secretary and native Texan Julian Castro, who is at 4%. The poll was conducted April 25-28, 2019, mixed mode, of Democratic primary voters with n=342, +/- 5.3%. 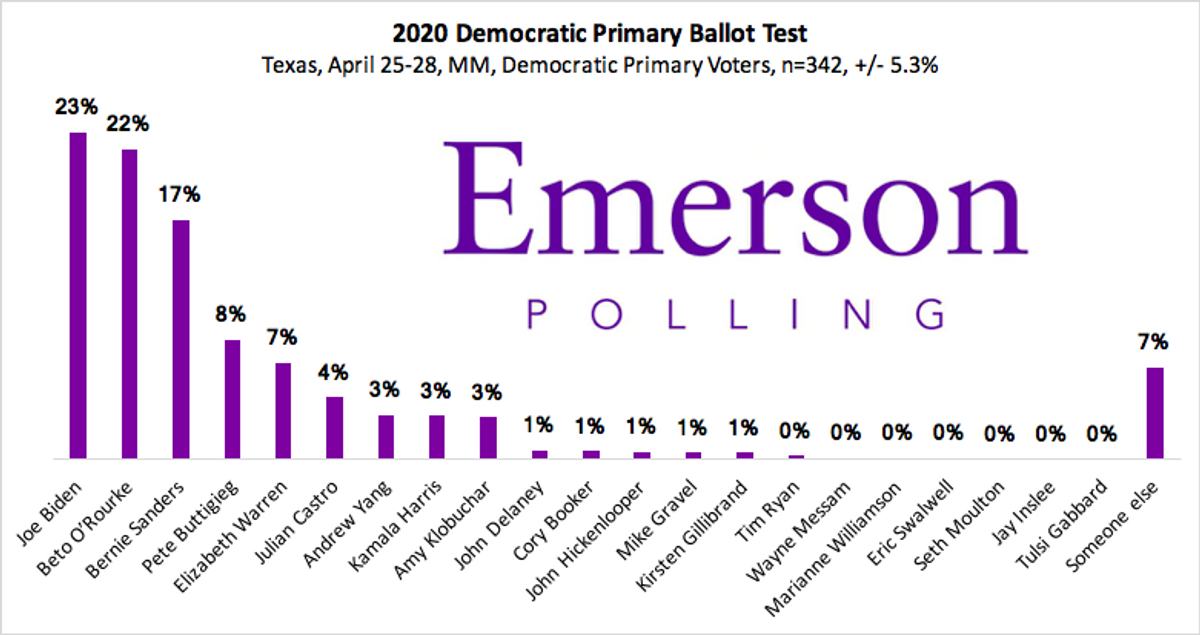 Spencer Kimball, Director of the Emerson Poll, explains “it looks like Beto O’Rourke does not have Texas locked up. Bernie Sanders had trouble back in 2016 in southern states, including losing Texas by 32 points (65% to 33%) to Hillary Clinton, so it will be exciting to see who can capture the Lone Star state in next March’s key Super Tuesday contest.”

O’Rourke does best with Hispanic voters, receiving 32% of their support. O’Rourke and Biden lead among white voters with 22% support each. Biden also leads among black voters with 40% support.

President Trump has a 46% approval/44% disapproval in Texas. However, he remains popular within his party, leading Republican opponent former Massachusetts Gov. Bill Weld 87% to 13%. (n=344, +/-5.3%). This is consistent with other Emerson polls conducted in different states over the past several months.

In general election matchups, Trump is in statistical dead heats with four of the top six Democratic opponents and leads the other two. In a Donald Trump versus Joe Biden matchup, the two are almost exactly even at 50% for Biden and 49% for Trump. Beto O’Rourke versus Trump is very similar, with 50% going to Beto and 50% supporting Trump. Bernie Sanders and Elizabeth Warren are the other Democrats within the margin, with Trump receiving 51% to Sanders’ 49% and Trump leading Warren 53% to 47%. The rest fall outside of the margin, with Kamala Harris and Pete Buttigieg each receiving 46% support to Trump’s 54%. 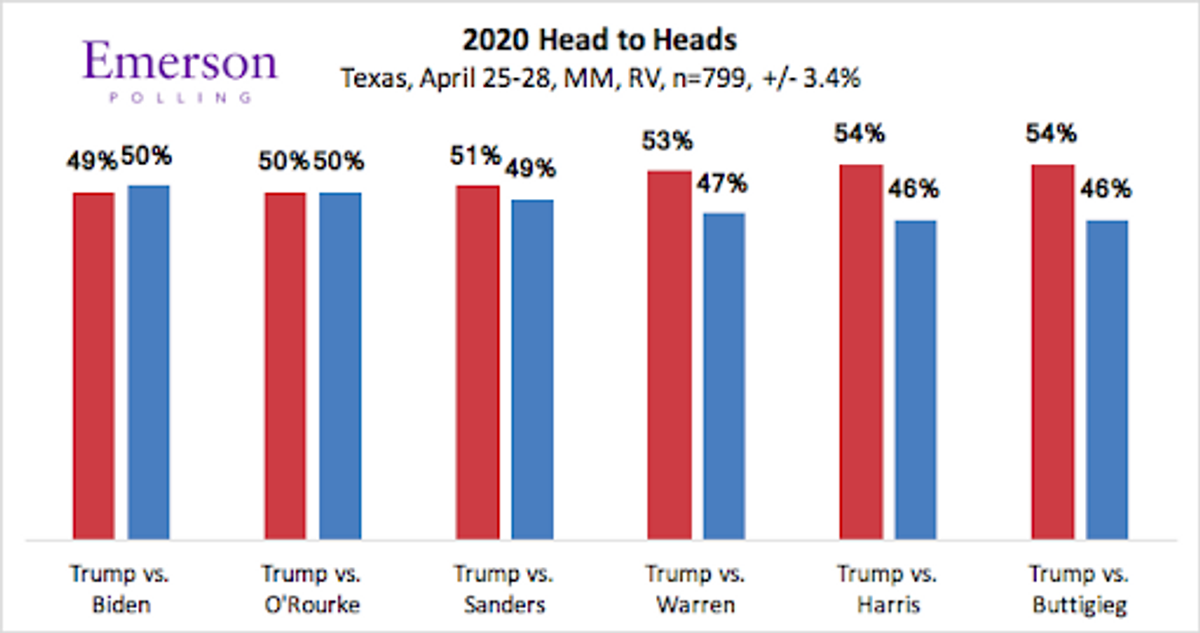 Despite the state’s current strict marijuana policies, a plurality (38%) of Texans support full legalization, 35% support marijuana use for medical purposes only, 13% would like it decriminalized, and 14% said it should remain illegal. 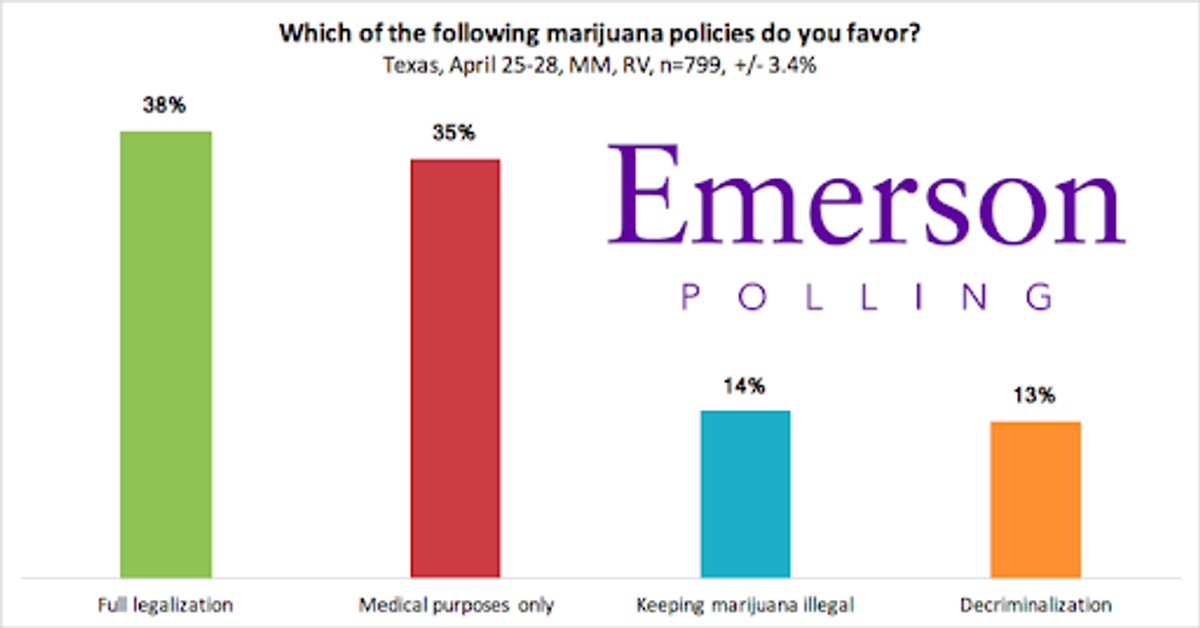 Kimball notes: “It looks like Texas is headed, at the very least to medical marijuana in the near future. Among Democrats, 54% support full legalization compared to 27% who prefer medical uses only, and among Republicans, 44% opt for medical purposes only as compared to 22% who support full legalization. Independents are split on the issue with 39% supporting legalization and 35% supporting it for medical purposes only; even among Republicans only 24% said they wanted to keep it totally illegal.”

In a potential 2020 U.S. Senate Race between Senator John Cornyn and former House candidate M.J. Hegar, the GOP incumbent Senator leads with 29% and Hegar is at 12%, 16% prefer someone else, and 44% are unsure of their choice. Kimball adds, “It is clear that Hegar has some work to do to sow up party support, as Hegar gets only 25% of the Democratic voters, while 50% of the Dems are unsure.” Kimball continues, “On the other hand, Cornyn is getting 52% of Republican voters, with only 34% of GOP voters unsure."

The Texas Emerson College poll was conducted April 25-28, 2019 under the Supervision of Professor Spencer Kimball. The sample consisted of registered voters, n=799, with a Credibility Interval (CI) similar to a poll’s margin of error (MOE) of +/- 3.4 percentage points. The data was weighted based on a 2016 voter model of race, region, mode, age. It is important to remember that subsets based on gender, age, party breakdown, ethnicity and region carry with them higher margins of error, as the sample size is reduced. Data was collected using both an Interactive Voice Response (IVR) system of landlines only (n=559) and an online panel provided by Amazon Turk (n=240). Visit our website at ​www.emersonpolling.com​. 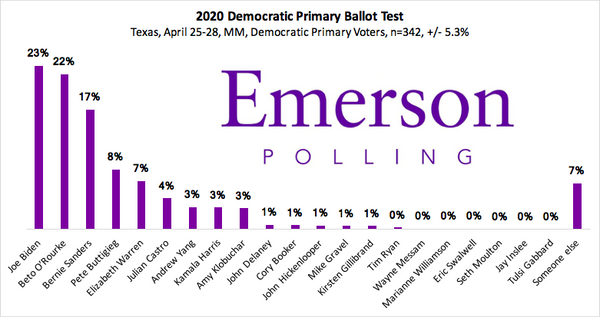 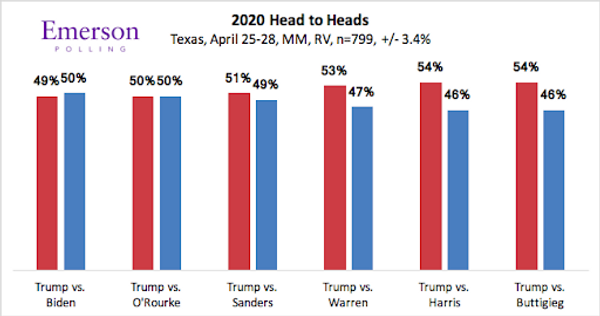 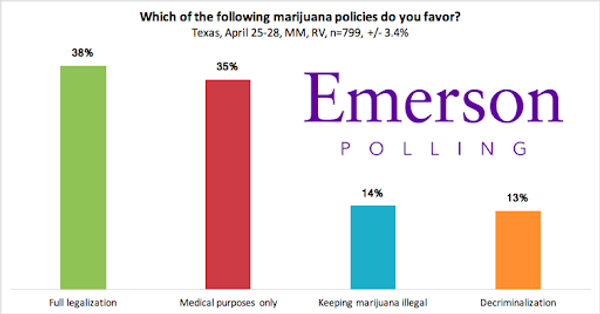